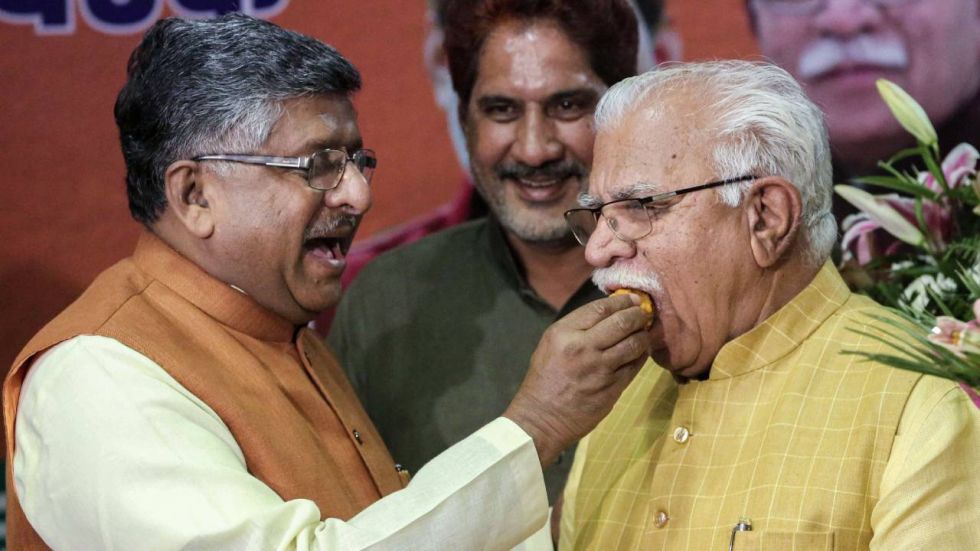 Manohar Lal Khattar is all set to become the chief minister of Haryana for the second straight term. He was expected to be elected the leader of the BJP legislative party in meeting of new MLAs on Saturday. Khattar then met Governor Satyadev Narain Arya in Chandigarh to stake the claim to form the government.

Khattar's path to return as chief minister was cleared on Friday, with BJP announcing an alliance with the fledgling Jannayak Janata Party (JJP) late evening. BJP, who won 40 out of Haryana’s 90 seats, needed support of at least 6 more MLAs to reach the majority mark. The Dushyant Chautala-led JJP has won 10 seats. BJP clinched the alliance with JJP by offering it the post of deputy chief minister.

BJP president Amit Shah announced at a press conference held with JJP leader Dushyant Chautala that the chief minister will be from his party and the deputy chief minister from the regional party. Chautala's support came after BJP had already cobbled together a majority with support of one HLP, one INLD and seven Independent MLAs. However, BJP's decision to win over Chautala underlines its quest to placate Jats, a dominant community in the state and who are believed to have voted mostly against the saffron party in the recent polls, to ensure a smooth run of its government.

Ajay Chautala, father of Dushyant Chautala, has been granted furlough for 14 days. He is expected to get out of Tihar jail this evening or tomorrow morning.

Haryana CM Manohar Lal Khattar and JJP Leader Dushyant Chautala have arrived at Governor house to stake the claim to form the next government in state.

Earlier, Haryana Minister and BJP leader Anil Vij has said that there was no question of including Gopal Kanda in the government or taking his support.

Haryana Minister and BJP leader Anil Vij: No question of including Gopal Kanda in the government, neither are we taking his support pic.twitter.com/MV2WNi3hTQ

Manohar Lal Khattar is set to return as the chief minister of Haryana for the second straight term. He was elected the leader of the BJP legislative party in meeting of new MLAs on Saturday. Khattar will now meet Governor Satyadev Narayan Arya in Chandigarh to stake claim to form the government. There are reports that he may even take the oath on Diwali on Sunday.

Anil Jain, BJP Haryana in-charge, on whether BJP will take support of Gopal Kanda: "We will first hold a meeting of our legislative party shortly, after that we will decide from whom to take support."

Haryana CM Manohar Lal Khattar has arrived in Chandigarh for the meeting of BJP legislative party. He left from Delhi this morning.

According to sources, Naina Singh Chautala may become the deputy CM of Haryana. JJP MLAs have elected Dushyant Chutala as the leader on the floor. However, he may forward the name of his mother Naina as deputy chief minister. JJP MLAs are expected to meet again today.

There are reports saying that ML Khattar may take oath as chief minister after Diwali. The full cabinet is expected to be sworn-in together.

The newly elected MLAs of BJP will meet on Saturday at 11 AM. Manohar Lal Khattar is likely to be elected the BJP legislative party leader at the meeting in Chandigarh. He will then stake claim before the governor to form the government.

BJP president Amit Shah on Friday announced that the Bharatiya Janata Party (BJP) and the Jannayak Janata Party (JJP) will form the next government in Haryana, adding that Manohar Lal Khattar will remain as the Chief Minister, while Dushyant Chautala’s party will get the Deputy CM post.