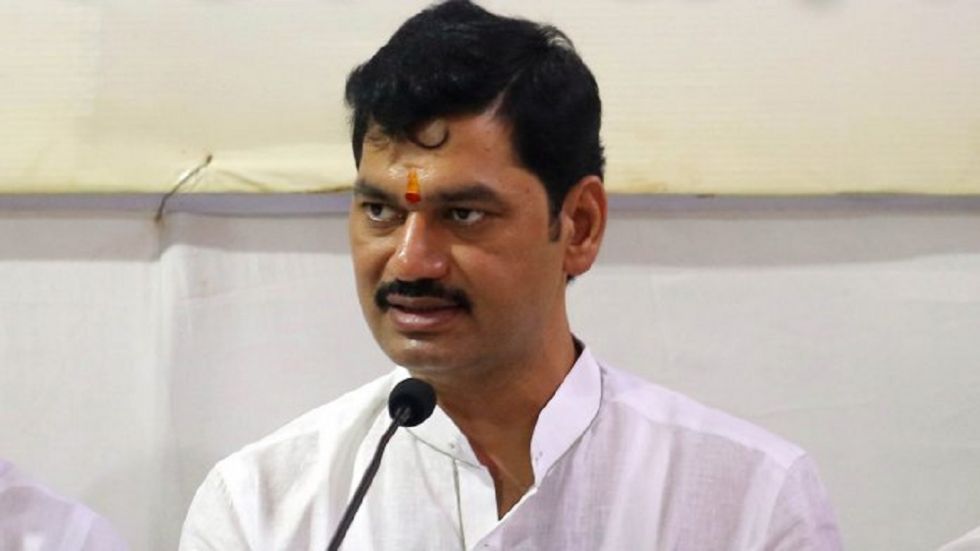 The BJP has also complained to the Election Commission and the women’s commission against the NCP leader Dhananjay Munde's remarks. (Photo Credit : ANI )

An FIR has been lodged against NCP leader Dhananjay Munde for allegedly making obscene comments against his estranged cousin and Maharashtra minister Pankaja Munde at an election rally, a police official said on Sunday.

The NCP leader, however, said the clip was edited and fake, and his remarks were “distorted” to project him as a “villain” by his rivals to win elections.

A video purportedly showing the NCP leader making the remarks against the minister went viral on social media, following which a BJP functionary from Parli in Beed district filed a police complaint against him on Saturday, he said.

Both the cousins are locked in a battle from Parli segment for Monday’s state Assembly polls.

Lohiya in his complaint said the NCP leader allegedly made the obscene remarks against the BJP minister at a public meeting held at Vida village in Kej tehsil on October 17.

The BJP has also complained to the Election Commission and the women’s commission against the NCP leader’s remarks.

Some BJP workers also burnt his effigy at Shirur-Kasar tehsil here on Saturday night. However, Dhananjay Munde said the clip was being circulated on social media by “distorting” his comments to “deliberately” defame him and project him as a “villain”.

“My speech at Vida has been tampered with. This is clearly an attempt (by rivals) to make me a villain and win the elections,” he said at a press conference here on Sunday.

“I have succeeded in politics on my own. I sacrificed Parli constituency for Pankaja Munde (apparently referring to 2009 when Gopinath Munde fielded his daughter),” he said.

The NCP leader pointed out that he spoke at Vida last Thursday and the clip went viral on Saturday.

“The complainant has not submitted any CD of my speech and neither the police verified it. We also tried to complain over this controversy, but the police didn’t entertain it. But my speech in Vida is tampered and people who recently entered the BJP have made this attempt,” he alleged.

“I have not taken the name of my sister, I have never used words which will hamper the brother-sister relationship. This is an attempt to finish my political career. Our family has more number of female members...I will never make such comments which are below the dignity of women,” he asserted.

Earlier in a statement on Facebook late Saturday night, he demanded that the authenticity of the “edited” clip be tested in a forensic laboratory.

Those who have “edited” the clip should at least respect the holy relationship of brother and sister, the leader of opposition in the state Legislative Council said.

The NCP leader said he is contesting the election only on the issue of development, and asked his detractors not to stoop low by giving an emotional twist to it.

“It is an edited clip, distorts my statement and deliberately defames me. The clip is completely fake and its authenticity must be tested in forensic lab.”

He alleged that an emotional twist was being given to the election in the constituency as he has been receiving huge response from the people, causing fear of defeat in the minds of his rivals.

He also said he did not use bad words about any of his rivals, despite him being labelled as “monster”.

“I did principle-based politics yesterday and doing it today. I have done ‘kanyadaan’ of my 1,500 sisters (girls). I will never use wrong words about any woman. Hence, workers and citizens should not believe in rumours,” he added.