Revolt Intellicorp's RV 400 electric motorcycle is receiving an overwhelming response in the Indian market, with more than 2,500 units of the bike booked till now.

Revolt Intellicorp's RV 400 electric motorcycle is receiving an overwhelming response in the Indian market, with more than 2,500 units of the bike booked till now.

Revolt had opened the bookings exclusively for customers in Delhi and Pune on the company website on June 25 and Amazon.in on July 5. Interestingly, the Revolt has become the first motorcycle brand to be available for pre-booking on an e-commerce platform. The pre-booking of Revolt RV 400 is fixed at Rs 1,000 on Amazon and it is totally refundable.

Following the price reveal, which is expected to take place by the end of this month, the customers can confirm their booking within seven days and the pre-booking amount will be adjusted against their order. It is to be noted that Revolt RV 400 was first unveiled June 18, 2019. Revolt RV 400 is said to be India's first AI-enabled motorcycle.

The Revolt RV 400 will be available in two colours i.e. Rebel Red and Cosmic Black. The RV 400 has a claimed range of 156 km and is powered by the Revolt App, which is available on both Android and iOS platforms. The app will have connectivity features like bike locator, door-step battery delivery, mobile swap stations, anti-theft, sound selection and preview, among others.

However, the exact specifications will be announced when the RV 400 is officially launched. The motorcycle might be priced around Rs 1 lakh (ex-showroom) post FAME subsidy. 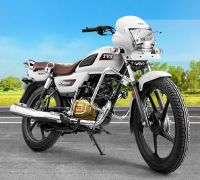