It is to be noted that MG Hector SUV is also be one of the first connected SUVs to be launched in India and it will be offered in four variants - Style, Super, Smart and Sharp. It will come in in five colours - glaze red, burgundy red, starry black, aurora silver and candy white.

Below are the variants wise prices for MG Hector SUV:

In terms of the engine, MG Hector comes with the option of both, petrol and diesel powertrains. There is a 1.5-litre turbocharged petrol engine good for 141 bhp and 250 Nm of peak torque, with a standard 6-speed manual gearbox. You can have it with a 6-speed DCT (Double Clutch Transmission) also. Then there is a 2.0-litre turbocharged diesel motor producing 168 bhp and 350 Nm of peak torque. It is mated to a 6-speed manual transmission.

The Hector SUV also gets a segment first 48V Hybrid System with the petrol trim. Boasting of better fuel efficiency and lower emissions, this variant also gets a 6-speed manual gearbox.

The Hector SUV has already started rolling off the MG Motor’s assembly line from its plant in Halol, Gujarat. The current capacity of Halol manufacturing facility is about 80,000 units per annum, which will later expand to 200,000 units, as per the requirement.

In the Indian market, MG Hector SUV will compete against Tata Harrier, Jeep Compass and Kia Seltos. Interestingly, the car-maker has already received more than 10,000 bookings. Also, the company has kick started operations with 120 centres for the convenience of its customers. This figure will go up to 250 in September 2019. 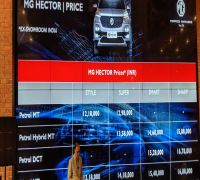 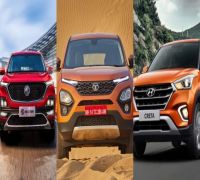 MG Hector vs Tata Harrier vs Hyundai Creta: Which car you should buy? 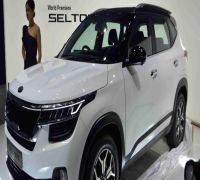