Amidst slump in India’s auto sector, the August month witnessed four major launches including Kia Seltos, Maruti Suzuki XL6, Hyundai Grand i10 Nios and Renault Triber. All new arrivals are enjoying tremendous customer demand. News Nation brings to you the specifications, features and prices of the top launches of the last month.

On August 22, 2019, Kia Seltos was launched in India with prices starting at Rs 9.69 lakh for the base petrol, going up to Rs 15.99 lakh (all prices, showroom) for the range-topping diesel.

Kia Seltos is available in Tech Line and GT Line trims, each of which are offered in five variants - E, K, K+, X and X+. Kia Seltos is available in 16 variants. The Tech Line gets more premium appearance with a beige and black cabin with leather upholstery. On the other hand, the GT Line gives sportier look to the Seltos with an all-black cabin, black leather seats with red contrast stitching. The GT Line also gets sporty looking bumper.

Also, Kia Seltos comes with a 1.5-litre VGT diesel that belts out 113 bhp and 250 Nm of torque. It is paired to a 6-speed manual and a 6-speed torque converter automatic transmission. The compact SUV is available in normal, eco and sports drive modes. It also gets different traction modes like Snow and Mud.

The mid-size SUV have the iconic tiger-nose grille with full LED headlamps on the front and vertically housed LED fog lamps. On the rear, the car will be equipped with LED taillights and dual exhaust pipes.

Maruti Suzuki XL6 was launched in India on August 21 at the starting price of Rs 9.79 lakh (ex-showroom Delhi).

Maruti Suzuki XL6 comes with a BS-VI compliant K15 petrol engine along with Smart Hybrid technology. It will be offered across two variant levels with a choice of manual and automatic transmissions. The premium MPV will be powered by a BSVI compliant 1.5-litre K15B Smart Hybrid petrol engine that will deliver 105 hp and 138 Nm of torque. It will be offered with manual as well as automatic transmission options.

Maruti Suzuki XL6 comes with a fully re-designed front end. The grille is a new hexagonal unit, getting a chrome slat and the Suzuki logo at the centre. It has further received new aggressive-looking headlamps which have integrated LED daytime running lamps and indicators. Also, the front bumper of the XL6 is based on the muscular lines.

On the inside, the all black cabin adds to the premium quotient and features like the SmartPlay connectivity. The premium MPV also has Apple CarPlay, Android Auto, Navigation and many more. It also comes with ventilated cup holders, overhead console, accessory sockets in each row along with rear AC vents.

The new Grand i10 Nios comes in a dynamic look. The front end gets new headlamp clusters with projector lamps. The front grille also gets a new shape and the inside boundary is flanked by two boomerang LED daytime running lamps. The fog lamps have a triangular housing for them. The upfront of the grand i10 Nios gets "cascading grille". The rear looks sporty with the low and wide proportioned bumper.

On the inside, the cabin of grand i10 Nios is compact yet spacious with the upper C pad appearing to be floating on the lower C pad. The dashboard gets a new 8-inch touchscreen infotainment system which gets smartphone connectivity. The steering and the AC vents have been borrowed from the Hyundai Venue.

The Grand i10 Nios comes equipped with one petrol and one diesel engine option. The 1.2-litre petrol churns out 82 bhp and 114 Nm. It comes mated a 5-speed manual gearbox. The 1.2 litre diesel produces 74 bhp and 190 Nm of torque. It is mated to a 5-speed manual gearbox. Both trims are available in the 5-speed automatic transmission (AMT) as well.

The Hyundai Grand i10 Nios is available in six colours - Fiery Red, Polar White, Typhoon Silver, Titan Grey, Aqua Teal and Alpha Blue. Also, there are dual-tone options available as well but only with the Polar white and the Aqua Teal colours and both get a black roof. Hyundai Grand i10 Nios competes with the likes of Maruti Suzuki Swift, Tata Tiago and Ford Figo in the Indian market.

Safety features on the Hyundai Grand i10 Nios include ABS with EBD, Dual airbags, rear parking sensors, driver and passenger seatbelt reminder and pretensioners and speed alert system as standard on the car. In the top-end variants you get features like rear view camera, headlamp escort system, speed sensing door lock and impact sensing door unlock.

Renault Triber, the compact seven-seater multi-purpose vehicle, was launched in India on August 28. It is priced between Rs 4.95 lakh and Rs 6.49 lakh.

Powering the Triber is the 1.0-litre, three-cylinder engine that belts out 71 bhp and 96 Nm of peak torque. The engine is mated to a five-speed manual transmission as standard and tips the scale at 947 kg. On the competition front, Renault Triber is up against Maruti Suzuki Swift and the recently launched Hyundai Grand i10 Nios.

In terms of safety feature, the car has four airbags, three-point seatbelts for all three rows, the mandatory speed alert system, rear parking sensors and seatbelt reminder which helps it to comply with the new safety norms. The boot space is limited to 84 litres when all seats are in use while it can be expanded to 625 litres. 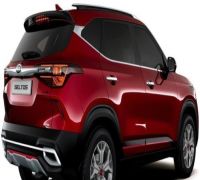 Kia Seltos receives over 23,000 bookings so far: Specs, features inside 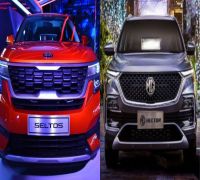 Kia Seltos vs MG Hector: Who Is The Winner In Terms Of Sales Numbers? 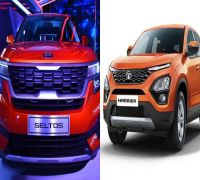