Kia Seltos vs MG Hector: Who Is The Winner In Terms Of Sales Numbers?

According to a report of India Today, MG Motor had sold 1,508 units of Hector in July this year. It further sold 2,018 units of Hector in August 2019. The total sale of MG Hector SUV stands at 3,526 units. On the other hand, Kia Motors has sold 6,200 units of Seltos in August 2019. Yes, you read it right. In merely 10 days of its launch, the sales figure of Seltos is way beyond the combined tally of Hector for July and August.

Kia Seltos is available in Tech Line and GT Line trims, each of which are offered in five variants - E, K, K+, X and X+. Kia Seltos is available in 16 variants. The Tech Line gets more premium appearance with a beige and black cabin with leather upholstery. On the other hand, the GT Line gives sportier look to the Seltos with an all-black cabin, black leather seats with red contrast stitching. The GT Line also gets sporty looking bumper.

Also, Kia Seltos comes with a 1.5-litre VGT diesel that belts out 113 bhp and 250 Nm of torque. It is paired to a 6-speed manual and a 6-speed torque converter automatic transmission. The compact SUV is available in normal, eco and sports drive modes. It also gets different traction modes like Snow and Mud.

The mid-size SUV have the iconic tiger-nose grille with full LED headlamps on the front and vertically housed LED fog lamps. On the rear, the car will be equipped with LED taillights and dual exhaust pipes.

The GTX Plus DCT is the most popular variant of Seltos at present. Recently, it was reported that Kia Seltos GT Line will soon have a diesel engine option.

In terms of the engine, MG Hector comes with the option of both petrol and diesel powertrains. There is a 1.5-litre turbocharged petrol engine good for 143 PS and 250 Nm of peak torque, with a standard 6-speed manual gearbox. You can have it with a 6-speed DCT (Double Clutch Transmission) also. Then there is a 2.0-litre turbocharged diesel motor producing 170 PS and 350 Nm of peak torque. It is mated with a 6-speed manual transmission.

Hector also gets a segment first 48V Hybrid System with the petrol trim. Boasting of better fuel efficiency and lower emissions, this variant also gets a 6-speed manual gearbox. 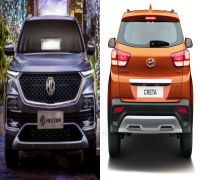 MG Hector vs Hyundai Creta: How THESE two SUVs fare against each other? 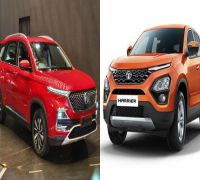 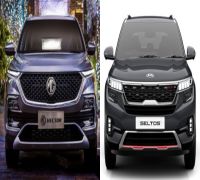