Delhi Fire: The house in the Filmistaan area was being used as a makeshift factory to manufacture school bags. 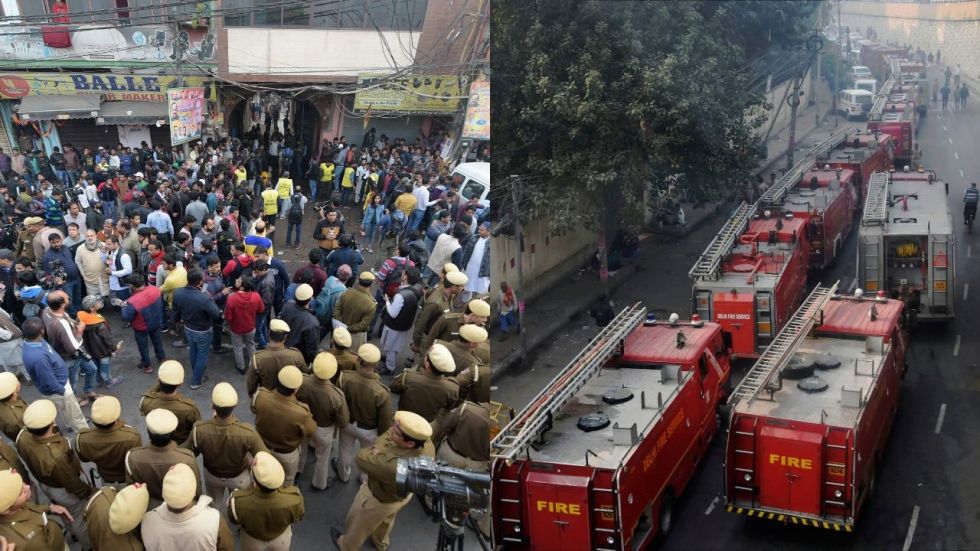 A call about the fire was received at 5:22 AM following which 30 fire tenders were rushed to the spot (Photo Credit : PTI )

Delhi Fire Updates: A massive fire swept through a factory in Anaj Mandi area of north Delhi on Sunday morning, leaving more than 40 people dead and many others injured, police said. The latest reports put the toll at 43. The death toll is likely to climb as many of the injured have suffered grievous injuries, according to fire and police officials. A total of 59 people were inside the factory operating from a residential area when the blaze broke out, reported PTI. The fire was reported at 5:22 AM following which 30 fire tenders were rushed to the spot. More than fifty people trapped inside were rescued and rushed to LNJP, RML and Bara Hindu Rao hospitals. The officer further said the fire was of "medium category" and had been completely doused.

The Delhi government ordered a probe into the fire incident in Anaj Mandi area and sought a detailed report within seven days. Revenue Minister Kailash Gahlot directed district magistrate (central) to conduct an inquiry and submit a report within seven days. During his visit to the site, Delhi Chief Minister Arvind Kejriwal said he has ordered a magisterial inquiry into the incident. Kejriwal also announced compensation of Rs 10 lakh each to be given to families of those dead and Rs 1 lakh each to those injured. The expense of medical treatment of those injured to be borne by the government.

The Prime Minister's Office also announced an ex-gratia of Rs 2 lakh each from Prime Minister's National Relief Fund (PMNRF) for next of kin of those who have lost their lives due to tragic fire in Delhi. PM Modi has also approved Rs 50,000 each for those seriously injured in the fire.

According to reports, the house in the Filmistaan area was being used as a makeshift factory to manufacture school bags. Delhi police is looking for the owner of the building Rehan while his brother has been taken into police custody. Rehan has been booked under section 304 of IPC.

Chaotic scenes were witnesed at the site of the fire incident with relatives and locals rushing to the area. According to a man whose three nephews were working at the factory, "At least 12-15 machines were installed in the unit. I have no idea about the factory owner."

"My nephews Mohammed Imran and Ikramuddin were inside the factory. I don't know their whereabouts," the distraught man said.

According to him, many units were operating from the premises which was located in a congested area. Many people trapped inside were rescued and rushed to RML Hospital, LNJP and Hindu Rao Hospital, fire officials said. 34 people were brought dead to LNJP hospital and smoke inhalation was the primary cause of the death. Some of the bodies were charred, Dr Kishore Singh, Medical Superintendent, LNJP, said. Out of the 15 injured brought to LNJP, nine people are under observation and others have partial injuries, he said.

Delhi CM Arvind Kejriwal reacted to the news of the incident calling it very very tragic. "Rescue operations going on. Firemen doing their best. Injured are being taken to hospitals," he tweeted.

Prime Minister Narendra Modi also reacted to the tragedy tweeting "The fire in Delhi’s Anaj Mandi on Rani Jhansi Road is extremely horrific. My thoughts are with those who lost their loved ones. Wishing the injured a quick recovery. Authorities are providing all possible assistance at the site of the tragedy."

Speaking to media, Deputy Fire Chief Officer Sunil Choudhary said, "A fire broke out in a 600 sq feet plot. It was very dark inside. It is a factory where school bags, bottles and other materials were kept." "We have so far sent 15 people to the LNJP hospital for medical aid. While some of them were injured, others had fainted. The owner said that around 20-25 labourers were sleeping inside when the incident happened," he added.