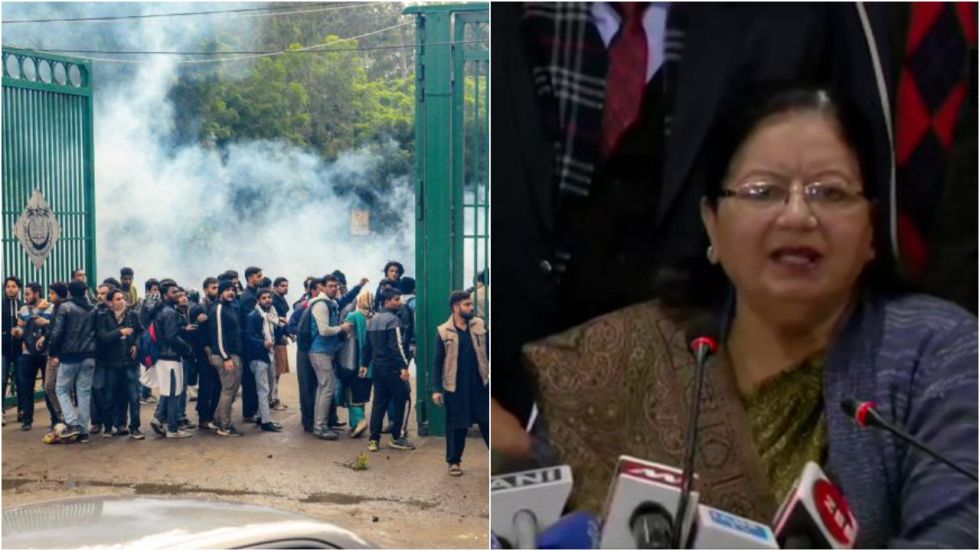 Day after brutal crackdown on students of the Jamia Millia Islamia University in south Delhi, the Vice-Chancellor on Monday addressed media to present the story from the prestigious institute’s point of view. Jamia Millia Islamia Vice-Chancellor Najma Akhtar said that the cops entered the university with the permission from the officials. She also said that the university will file an FIR against the cops for all the damages done inside the campus. Urging restrain and peace, Akhtar also said that the media must not defame Jamia Millia Islamia University. “Don’t target us, our students were not involved,” Akhtar said. “There has been a lot of property damage in the University, how will all this be compensated? There has been an emotional loss as well. Yesterday's incident was unfortunate. I also appeal to everyone to not believe in any kind of rumours,” Akhtar further said.

More importantly, Akhtar denied rumours of death of a Jamia student. “There has been a strong rumour that two students died, we deny this totally, none of our students died. About 200 people were injured of which many were our students,” the Vice-Chancellor said.

Talking about the Sunday drama, Akhtar further said that the rumours of police opening fire inside campus is untrue. “Police opened fire inside the campus: We talked to the Police Joint Commissioner and other senior officials on it, and they have strongly denied this rumour,” Akhtar said. AP Siddiqui, Registrar of Jamia Millia Islamia, on reports that the police entered the mosque at the campus and also sexually assaulted girl students - “Lot of rumours are being floated on social media. We can't confirm or deny all of them.”

A group of Jamia Millia students stood shirtless in the bone-chilling cold outside the university gates on Monday and formed a human chain to protest the police action against their colleagues a day earlier. Slogans of "Inquilab Zindabad" rent the air as the group of around 10 students, accompanied by their fellow colleagues, took out a small march, demanding a CBI inquiry into the "police brutality". Carrying a tricolour, students clapped and raised slogans against the central government and the Delhi Police. "This government is anti-minority, anti-students, anti-poor. We won't tolerate this. Won't keep mum," they said. A few also live streamed the protest on Twitter, Facebook and other social media platforms. A group of students claimed that the police on Sunday damaged two mosques on the university campus, beat up the Imam and also a blind student, Arsalan (27), who was in the library.