Kamlesh Tiwari's family had performed his last rites on Saturday after they were assured of a meeting with Yogi Adityanath. 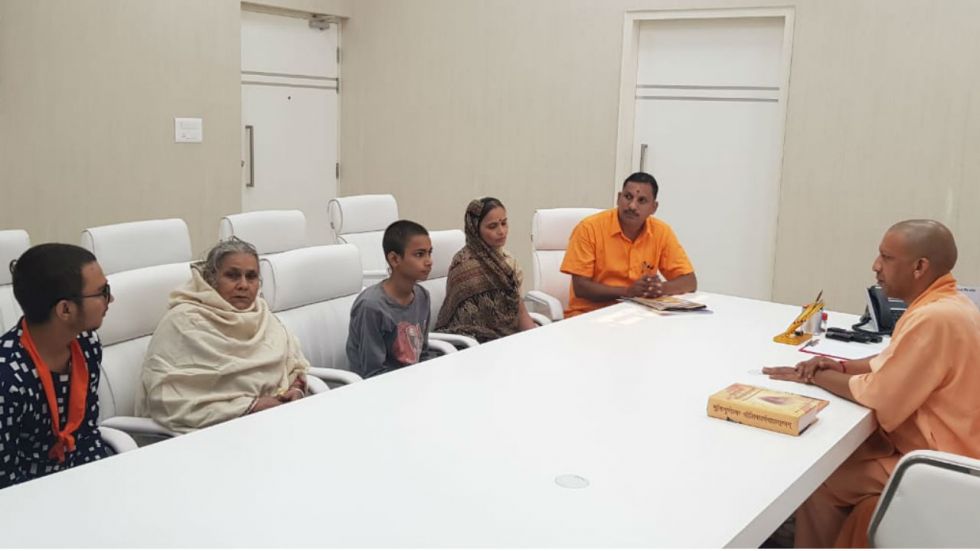 Kamlesh Tiwari was murdered at his home in Lucknow on Friday (Photo Credit : News Nation )

The family of Kamlesh Tiwari, the president of Hindu Samaj Party, who was murdered at his home in Lucknow on Friday, met Uttar Pradesh Chief Minister Yogi Adityanath on Sunday. They demanded justice and action against the culprits. UP CM Yogi Adityanath assured them that no one will be spared. The family also put several other demands in front of the chief minister including a statue of Kamlesh Tiwari. They also demanded that the name of Khusidbagh be changed to Kamleshbagh.

Earlier, terming the murder of Tiwari an act of mischief to create terror, Uttar Pradesh Chief Minister Yogi Adityanath on Saturday said such incidents will not be tolerated and those involved will not be spared.

"The elements who create an atmosphere of fear and terror in the state will be strongly dealt with, and their plans crushed. This type of incident will not be tolerated, and those involved will not be spared," Adityanath added.

Kamlesh Tiwari, who was earlier associated with a faction of the Hindu Mahasabha,  was murdered by two people at his Lucknow office in Khurshid Bagh area on Friday afternoon. The killers, wearing saffron kurtas, had come with a box of sweets where they had hidden a pistol and knife. The killers are still at large.

The killers were allowed to meet Tiwari by the security guard posted at his residence only after the leader of the lesser-known Hindu outfit gave him the nod.  The killers sat with Tiwari and had food and tea. Subsequently, the personal aide of Tiwari and his son were sent to the market to purchase something, and it was during this period that Tiwari was murdered, Adityanath said.

Tiwari's mother Kusuma alleged that he was killed by a "local BJP leader" due to a temple dispute in a village.

Meanwhile, six people have been arrested in connection with the murder.

Uttar Pradesh Police had said that five persons, including three from Gujarat's Surat, had been held in connection with the murder. Among the arrested were Bijnor residents Mohammed Mufti Naeem Kazmi and Imam Maulana Anwarul Haq, who were booked on murder charge on Friday after Tiwari's wife named them in her police complaint alleging that the duo had announced a bounty of Rs 1.5 crore on his head in 2016.  Three persons detained in Surat by Gujarat Anti-Terrorist Squad were identified as Faizan Yunus Bhai, Maulana Mohsin Sheikh and Rashid Ahmed Khursheed Ahmed Pathan.

The Anti-Terrorism Squad of Maharashtra police on Saturday arrested a man from Mominpura locality.  The ATS official said the arrest was made on the basis of leads provided by the the Uttar Pradesh Police. The arrested man was identified as Sayed Asim Ali (29), who runs a hardware business in the city. Ali had organised a protest against Tiwari in the past and also issued a 'warning' to him in a YouTube video, the police official said.