An official of the Gauhati Medical College and Hospital said that one person was "brought dead" and another succumbed to injuries while undergoing treatment. The official, however, could not give their names, saying that "they were brought unidentified". 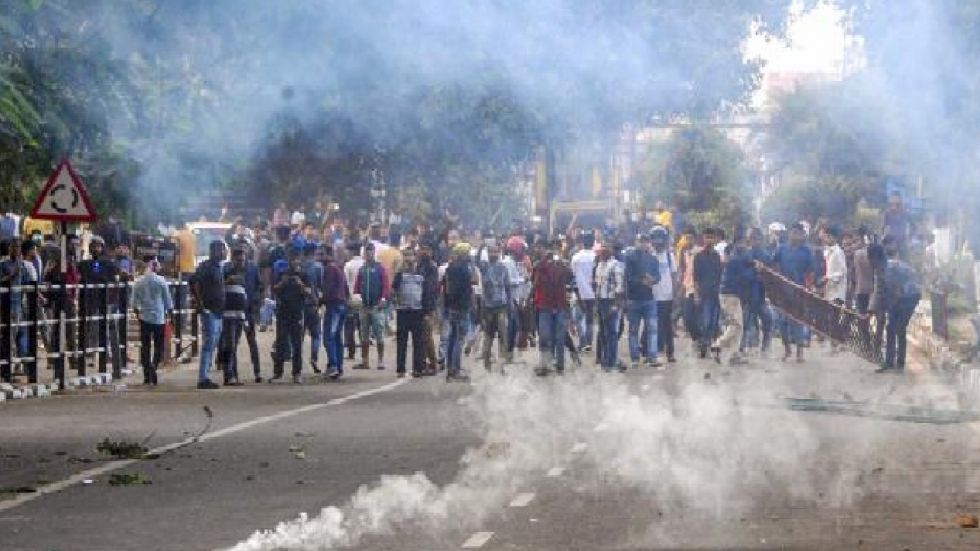 At least two persons died due to bullet injuries on Thursday after police opened fire on protesters in Assam's Guwahati, PTI reported quoting officials. This is the first report of any deaths in the ongoing protests against the Citizenship Amemndment Bill 2019 in Northeastern states including Assam and Tripura.

An official of the Gauhati Medical College and Hospital said that one person was "brought dead" and another succumbed to injuries while undergoing treatment. The official, however, could not give their names, saying that "they were brought unidentified".

The state has been on edge as thousands of angry protesters came out on streets defying curfew, thumbing their nose at Army contingents staging flag marches, and clashing with police across cities.

Earlier today, thousands of people defied curfew in Guwahati and took to the streets, prompting police to open fire, even as protests against the contentious Citizenship (Amendment) Bill intensified in Assam. Police said they had to open fire in Lalung Gaon area in Guwahati after stones were hurled by protestors. The agitators claimed that at least four persons were injured in the shooting.

Internet services were suspended at 7 pm on Wednesday amid the protests. To tackle the situations, the government also made a slew of changes in the state’s police ranks. Guwahati Police commissioner Deepak Kumar was removed and Munna Prasad Gupta was appointed in his place.

Additional director general of police (law and order) Mukesh Agarwal was transferred as ADGP (CID) and GP Singh was given his charge. Police had to fire in the air in several areas of the city, including the Guwahati-Shillong Road which turned into a war zone as protestors vandalised shops and buildings, burnt tyres and clashed with security forces.

Students’ body AASU called for a mega gathering at Latashil playground in the city, which was attended by hundreds of people. Notwithstanding the restrictions, several prominent personalities from the film and music industry, including icon Zueen Garg, joined the meet along with college and university students.

“Prime Minister Narendra Modi and Chief Minister Sarbananda Sonowal have betrayed the people of Assam by ensuring passage of the Bill,” AASU advisor Samujjal Bhattacharya said at the gathering, which was supported by the Shilpi Samaj.

Leaders of the AASU and the North East Students’ Organization (NESO) said they will observe December 12 as ‘Black Day’ every year in protest against the passage of the Bill in Parliament. In Dibrugarh’s Chabua, the hometown of Chief Minister Sarbananda Sonowal, local MLA Binod Hazarika’s residence was set on fire. Vehicles parked in the building that also houses his office were torched by the protestors as well, an official said.

The circle office in the town was also burned down by them, he said. Kamrup district witnessed an absolute shutdown with offices, schools and colleges closed for the day. Shops were also shut, with no transport plying as all major roads, including the NH 31, being blocked. Police said they had to fire three rounds in the air in Rangia town as protestors threw stones and burnt tyres.  Agitators were also baton-charged at several places in the town.

Curfew from 6 pm to 6 am was imposed in Jorhat district to prevent vandalism at night, deputy commissioner Roshni Korati said. Police also fired in the air in Golaghat district to disperse protesters who blocked the NH 39, officials said. Tea garden workers stopped work in Lakhimpur and Charaideo districts and also at Numaligarh in Golaghat district and some areas in Tinsukia district. All educational institutions across the state are closed.

Five columns of the Army have been deployed in different parts of the state and are conducting flag marches in Guwahati, Tinsukia, Jorhat and Dibrugarh, the officials said. Several flights and trains to and from Assam have also been cancelled.

Hundreds of passengers remained stranded at the Guwahati airport due to the curfew. From students to working professionals and old men to young women, people were seen squatting inside and outside the Lokpriya Gopinath Bordoloi International airport at Borjhar area, about 30 km from the main city.

The civil aviation ministry said movement of passengers at the Dibrugarh airport was also disrupted due to blockage of road transportation. The stranded passengers have been evacuated in a phased manner, the ministry said in a series of tweets. The Citizenship (Amendment) Bill seeks to provide Indian citizenship to non-Muslim refugees coming from Pakistan, Bangladesh and Afghanistan after facing religious persecution there.

The protestors said if the Bill becomes a law then it will endanger the indegenous population of the state as people crossing over from Bangladesh will get permanent Indian citizenship, leading to a change in the demography of the region.