Deepika Padukone Inconsolable At 'Chhapaak' Trailer Launch, Calls It Her Most Special Film

After the trailer launch, Deepika was called on stage but could not hold back her tears. 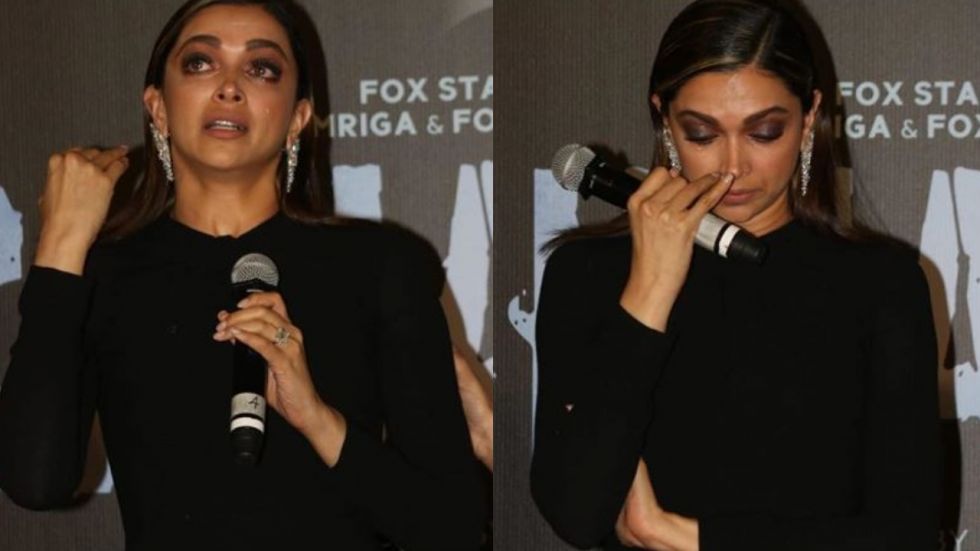 Actor Deepika Padukone broke down at the trailer launch of her upcoming film "Chhapaak" on Tuesday, saying she was at a loss for words about the movie where she plays an acid attack survivor.

The actor called the film, directed by Meghna Gulzar, her career's most special project. It is based on the real-life story of acid attack survivor Laxmi Agarwal.

After the trailer launch, Deepika was called on stage but could not hold back her tears.

"I had only thought that the trailer would be shown and we will come on the stage but I didn't think I would have to speak about it too once on the stage. Whenever I watch the trailer, I... Can we talk about this later? I am really sorry," Deepika said.

Meghna, who was standing next to Deepika, said the actor had not seen the complete trailer earlier, which is why she felt overwhelmed.

The director also requested the photographers to not click Deepika's pictures as she tried to compose herself.

The 33-year-old actor later said she instantly had an emotional connection with the story, which is rare to come across in an artiste's career.

"Usually, you have to sit through the entire process and have to decide whether you want to do a film or not, and it's not often where you know instantly in first minutes of meeting a director that this is what you want to commit your life to and 'Chhapaak' is that for me," Deepika said.

She thanked Meghna for trusting her with the role and hoped the film will have an impact on the audience.

"It's been an incredible journey, emotionally, putting it together and I feel like, irrespective of how it's received and how it does, it will be the most special film of my career and I truly hope all of you see...

#deepikapadukone gets emotional after watching the trailer launch #viralbhayani @viralbhayani

"The impact that the film is supposed to have on all of us and the reason why I have made this movie, I hope you see in it what we saw. We have made it with a lot of love, passion, enthusiasm and responsibility," Deepika added.

Gulzar, known for sensitive depiction of complex issues in films such as "Filhaal" and "Raazi", said her next was an urgent and relevant story in today's context.

"It is relevant in today's times given the situation of women in the country right now. I'm happy Deepika has given her face for Malti and completely let Malti take over."

Written by Atika Chohan, "Chhapaak" is scheduled to be released on January 10.