In Pics: Vicky Kaushal And Katrina Kaif Go For A Dinner Date At Mumbai Restaurant Amidst Dating Rumours

A new picture that was shared by the fan page of Katrina Kaif suggests the actress and Vicky Kaushal went for a dinner date at posh Mumbai restaurant together. 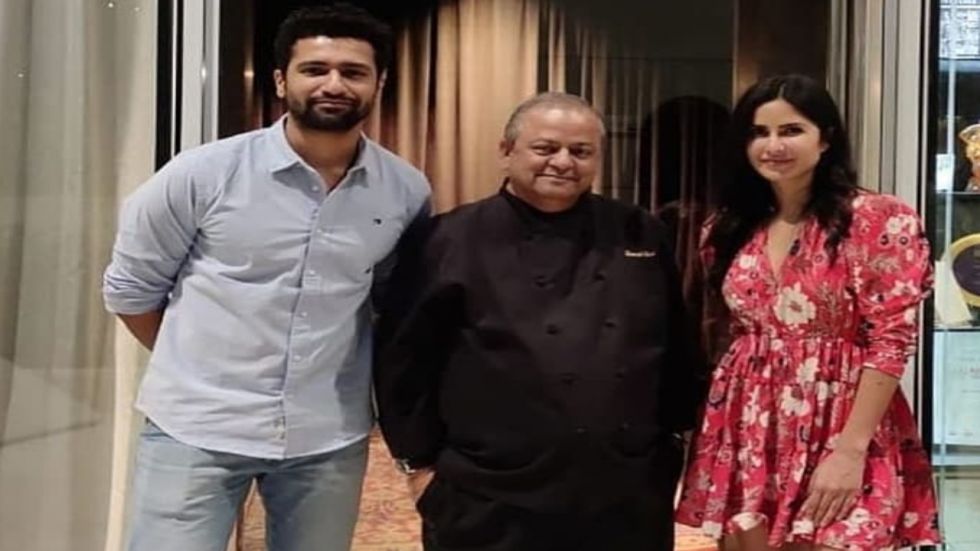 Vicky Kaushal and Katrina Kaif are the hottest gossip of the tinsel town. The actor duo recently went to a Diwali party together and since then has let the rumour mills buzzing that they are indeed dating each other. Now to add fuel to fire a new picture that was shared by the fan page of Katrina suggest they went for a dinner date at posh Mumbai restaurant together.

In the picture Katrina and Vicky are seen posing with the head chef Hemant Oberoi at his restaurant that goes by his name in BKC, in Mumbai. Katrina looks pretty as always in floral red dress while Vicky is sporting shirt in pastel colours and faded jeans.

Though the duo stood apart from one another with celebrity chef, Hemant Oberoi, in between the two, it definitely looks like the pair are spending time with each. Although the fan page has hinted at a movie of the two in the making but the fans hell bound to believe they are indeed seeing each other.

During the Filmfare awards in January, where the two stars the presented an award together Vicky had playfully asked Katrina, “Why don’t you find a nice boy like Vicky Kaushal and get married to him? The season of weddings is on, so I thought, you too would want to do the same and so I thought I ought to ask you.”

But lest we forget, behind a joke is also an ounce of truth and with both the stars being openly single, who knows if they could be the next ‘it’ couple? As of now, speculations just remains speculations and both the stars remain busier than ever. Apart from launching her own beauty line, Kaif will be next seen in Rohit Shetty’s Sooryavanshi opposite Akshay Kumar.

As for Vicky, he will be seen next in Sardar Udham Singh biopic and Karan Johar produced Bhoot: The Haunted Ship alongside Bhumi Pednekar.