Reasoning Why Rangoli Wants Narendra Modi To Let Any On Of Them Take Charge That Said, “These Women Have Gone Beyond Their Gender And Proved To The World That True Potential Of A Human Isn't Gendered Bound"

With the International Women's Day just around the corner and Prime Minister Narendra Modi gaving a shoutout to ‘inspiring women’ to take over his social media accounts, Rangoli Chandel, sister to Kangana Ranaut has nominated her sister and other filmmakers to do the task.

According to Kangana spokesperson and manager, Zoya Akhtar, Meghna Gulzar, Panga director Ashwiny Iyer Tiwari are worthy enough to handle the highest official of India’s Twitter, Instagram handles. She wrote, ''On a different note I want to nominate @ZoyaAkhtarOff @Ashwinyiyer @meghnagulzar and Kangana Ranaut for taking over @narendramodi ji’s handle on woman’s day, dear sir industry needs actresses but industry doesn’t need woman directors and writers (cont)''. In another tweet she even wants Kareena to take charge of the accounts

Reasoning why she wants Narendra Modi to let any on of them take charge, rangoli in a tweet said, “These women have gone beyond their gender and except for Kangana who is a budding filmmaker others have emerged as successful filmmakers, they proved to the world that true potential of a human isn’t gender bound ... they have incredible stories to share ( cont)''. 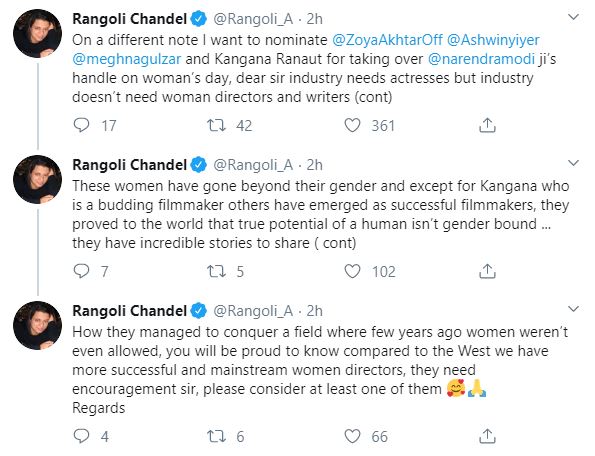 Asking for encouragement for women filmmakers in India, Rangoli further said that compared to the West India has more successful and mainstream women directors. “please consider at least one of them'' concludes hier string of tweets.

Kangana will be seen next in the Jaylalitha biopic ‘Thalaivi’. She is also set to star in films like ‘Dhaakad’ and ‘Tejas’ which are set to go on floors soon.