Sonali Bendre on shaving off her head: Being alive was more important

Bollywood’s beautiful actress Sonali Bendre was diagnosed with ‘high-grade cancer’ last year. During the treatment in US, Sonali had to go bald. Recently, she underwent a proper haircut and got her hair coloured too.

Bollywood’s beautiful actress Sonali Bendre was diagnosed with ‘high-grade cancer’ last year. Both Bollywood fraternity and her fans were stunned after learning about Sonali’s illness. However, the actress battled hard with the disease and emerged a winner. She has been an inspiration for all suffering from Cancer. Isn’t she? During the treatment in US, Sonali had to go bald. Well. She is now back in India and living her life to the fullest. Recently, she underwent a proper haircut and got her hair coloured too.

In an interview with Hindustan Times, the Sarfarosh actress said, “I’m so happy that my hair is grown back but more than anything else, all my life, I’ve had poker straight hair and now, there is some texture and some curl to it. I’m so excited about that. I’ve always wanted volume in my hair and now that it’s growing I’m liking it. It was a bit messy when it was growing out and it was time for a haircut. I got some bit of a colour as well because my hair is now grown slightly so we didn’t touch the colour to the scalp. We are being a bit careful with that and it just gave me so much joy. When you have long hair, you are really scared to cut it because you always want to hold onto it. But it was time to experiment. I’m going to make the most of it and try as many looks as I can. I’m going to have fun with my hair now.” 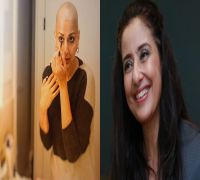 Sonali Bendre on fighting Cancer: Manisha Koirala has been a big help 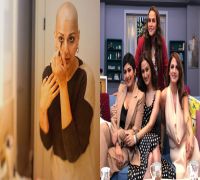 Sonali Bendre on going bald: My hair was very much part of my personality 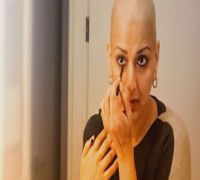 The actress further went on to talk about the day when she went bald. Sonali said, “When I was planning to cut my hair, I didn’t really have a choice. I remember going to the salon to get my last blow dry and my friend was shooting and my sister was with me so my hair dresser realised that this wasn’t usual. When I went back to him for the big day – the haircut, I was waiting for Ranveer, my son to join me in New York because I didn’t want it to be a big shock for him. I remember telling my hair dresser to just shave it all off but he insisted that we could go shorter and then finally, I went bald much later.”

It’s surreal how one can forge a bond when they least expect it. A chance encounter with @tomoarakawa at a salon in NYC, has led to this amazing friendship. Honestly, I’m in awe of the way he works his magic every time he picks a pair of scissors. I’m so glad he came down to India on his break and agreed to do my makeover right here at @kromakaysalon. Thanks to Tomo’s genius coupled with my friend @kantamotwani’s expertise, I enjoyed an afternoon of pampering and walked out with an amazing new hair cut😊😘

In the end, she said, “The first time when I cut my hair, I don’t think it was heartbreaking. By then, I had switched off. Being alive was more important. Suddenly my perspective on life had changed. I remember my friend telling me that we should collect the hair and make a wig out of it. But I didn’t want to keep it and I told her to let it go. I’m not saying I was joyful about it but I wasn’t sad either. I had accepted that this was something that had to be done.”