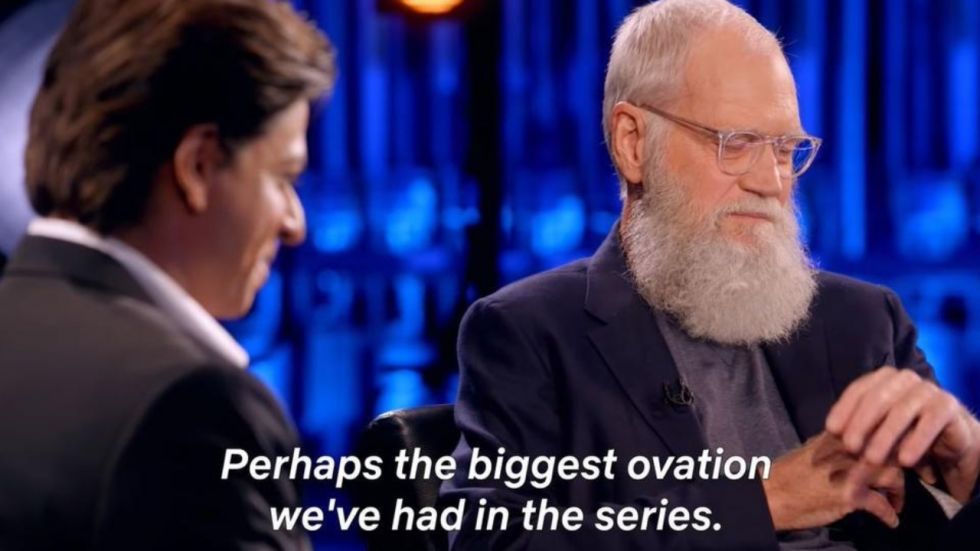 American television host and comedian, David Letterman’s candid chat with Shah Rukh will stream on Netflix on October 25. The trailer for the show was released by he online streaming just recently and the announcement for the episode was done the highly-

In the video, Shah Rukh received grand applause and a long welcome by his fans in the live audience. Letterman later revealed this it is perhaps the longest ovation a celebrity ever got on his show and he had to look at his watch to keep count of the time the audience would take to cheer for Shah Rukh. The actor also gestured at them to calm down.

In another bit, Shah Rukh is visited by Letterman at his Bandra residence on the occasion of Eid when he decides to cook Italian food for the host. While chopping veggies, Letterman pretends to have cut a finger, screaming loudly while clutching his hand. Shah Rukh staying calm all through like he always is chukles saying, “The scripting was very good. The performance fell short,”
Watch the trailer here:

Ahead of the conversation, Shah Rukh said, “I’ve watched David Letterman’s late-night talk show for years and I’m a huge fan of his style of interviewing. I’m thrilled, and honoured to share my story with him. That this is on Netflix is even more special – I’m working with the team on various projects and it’s always been exciting partnering with them.”

After interviewing Shah Rukh Khan in front of a live audience, Letterman said, “The best part of this job that Netflix has been happy to provide for me is to meet people. And after each one of these sessions I think to myself, it is a very smart, very lovely person from whom I have learned things. You would maybe be at the top of that list.”

The host, David Letterman is an American television host, comedian, writer, and producer who has hosted late night television talk shows for 33 years in his career.

The first season of the very successful show hosted by David Letterman saw him interviewing the leading names such as Barack Obama, George Clooney, Malala Yousafzai and Jerry Seinfeld, which will see the global icon, Shah Rukh Khan as a guest on the esteemed list.
With the fans going gaga and the social media giving us all the hints, if this turns out true then this feature of Shah Rukh with David Letterman will definitely be a promising entertainer and just like the fans, we are excited!