Over 200 people were killed and around 500 others injured in a series of blasts at several locations in the island nation.

Three Indians were among the 215 people killed in in the multiple blasts that struck churches and luxury hotels in Sri Lanka on Easter Sunday, External Affairs Minister Sushma Swaraj tweeted.

"Indian High Commission in Colombo has conveyed that National Hospital has informed them about the death of three Indian nationals. Their names are Lokashini, Narayan Chandrashekhar and Ramesh. We are ascertaining further details," she tweeted.

"I conveyed to the Foreign Minister of Sri Lanka that India is ready to provide all humanitarian assistance. In case required, we are ready to despatch our medical teams as well," Swaraj added. 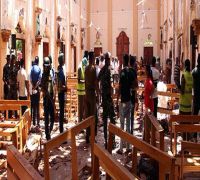 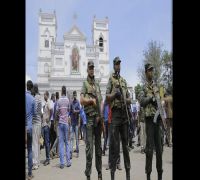 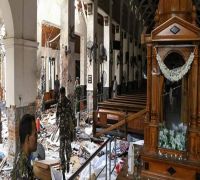 She later clarified in another tweet that one of the deceased was Lakshmi and not Lokashini.

Earlier, Kerala Chief Minister Pinarayi Vijayan confirmed the death of a Keralite woman in the deadly blasts. He said steps were taken to bring back the body of the deceased, P S Rasina (58), a resident of Kasargod, as soon as possible.

According to reports, Rasina was staying at Colombo's Shangri-La hotel and was killed in the blast there.

Over 200 people were killed and around 500 others injured in a series of blasts at several locations in the island nation.

Suicide bombers were involved in at least two of the eight attacks that struck three churches and luxury hotels frequented by foreigners on Easter Sunday.

The blasts - one of the deadliest attacks in the country's history - targeted St Anthony's Church in Colombo, St Sebastian's Church in the western coastal town of Negombo and Zion Church in the eastern town of Batticaloa around 8.45 a.M. (local time) as the Easter Sunday mass were in progress, police spokesman Ruwan Gunasekera said.

Explosions were reported from three five-star hotels - the Shangri-La, the Cinnamon Grand and the Kingsbury in Colombo.

Gunasekera confirmed 207 deaths. However, the News 1st channel said that 215 people have died in the blasts.

Director of the National Hospital Dr. Anil Jasinghe identified 11 of the 27 foreign nationals killed in the coordinated attacks believed to be carried out by a single group.