Protesters set fire to about five trains, three railway stations and tracks, and at least 25 buses on Saturday amid spiralling violence in West Bengal. 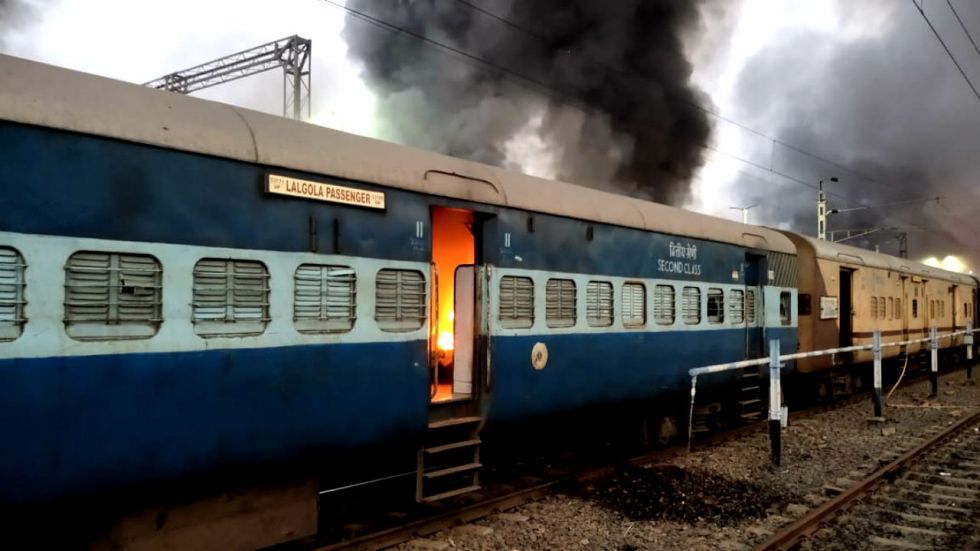 The death toll in the ongoing protests against the amended Citizenship Act rose to three in Assam after the driver of an oil tanker was killed when his vehicle was torched by a group of people in Sonitpur district on Friday night. Meanwhile, protesters set fire to about five trains, three railway stations and tracks, and at least 25 buses on Saturday amid spiralling violence in West Bengal. Suspension of Internet services across Assam was extended for 48 hours till December 16 though curfew was relaxed in Dibrugarh and Guwahati and also parts of Meghalaya, while a six-hour shutdown was observed in Nagaland. The UGC National Eligibility Test for candidates scheduled to appear in Assam and Meghalaya was postponed.

In West Bengal, protestors mostly targeted railway properties with Murshidabad, Malda and Howrah districts bearing the brunt of their ire. Official sources said public property worth crores of rupees have either been destroyed or looted.

The protests affected movement of trains in South Eastern Railways and in Howrah and Sealdah sections. According to a railway official, 78 trains, including 28 express trains, were cancelled by the South Eastern Railway, while around 39 trains were either rescheduled or diverted.

Train services came to a halt in the Howrah-Kharagpur section since 11 am as protesters sat on the tracks at Sankrail, Nalpur, Mourigram and Bakranawabaz stations.

At Krishnapur station in Murshidabad district, a number of empty trains were set on fire, while railway tracks at Lalgola station were damaged. The agitators set fire on railway tracks at Harishchandrapur in Malda district.

Sankrail railway station in Howrah district was ransacked while its ticket counter was torched and signalling system damaged. At Domjur and Bagnan in Howrah, protestors rampaged outside the stations, blocked roads and set fire to shops. The NH6 was blocked at Domjur by protesters who burnt tyres and ransacked several vehicles.

In some parts of Murshidabad and Malda, police stations were also attacked by mobs. Huge police contingents were rushed to the spot to control the situation. A toll plaza was set ablaze in Murshidabad and passengers were forcibly deboarded from a bus at Suti in the district. Tyres were burnt on the roads at Margram in Birbhum.

Protestors came out on the streets in Rajarhat, situated in the outskirts of Kolkata, and other parts of the North 24 Parganas district, burning tyres and ransacking vehicles.

Around 25 private and public buses were torched by protestors on the arterial Kona Expressway which provides connectivity to NH2 (Delhi Road) and NH6 (Mumbai Road) while a number of buses were set ablaze in Malda and Murshidabad districts, police said.

In some cases even fire engines and ambulances were not spared, they said.

West Bengal Chief Minister Mamata Banerjee, who has resolutely opposed the Citizenship Amendment Bill, appealed for peace, while the opposition BJP threatened to seek imposition of President's Rule if the "mayhem by Bangladeshi Muslim infiltrators continued."

"Do not take law into your hands. Do not put up road and rail blockades and create trouble for the common people," a Chief Minister's Office release said, quoting Banerjee.

Asking people to maintain calm and hold protest "democratically", she said violence will not be tolerated and stern action will be taken against miscreants.

West Bengal Governor Jagdeep Dhankhar, who is at loggerheads with Banerjee and the TMC government over various issues, tweeted, "Distressed and pained at events unfolding in the State. Chief Minister as per oath has to bear true faith and allegiance to the Constitution of India, and I as Governor will to the best of my ability to preserve, protect and defend the Constitution and the law."

The BJP and the CPI(M) blamed the TMC for doing nothing to control the situation and allowing the "state to burn". Intellectuals such as filmmaker Aparna Sen and actors Kaushik Sen and theatre actor-director Rudraprasad Sengupta urged the protestors to shun violence.

According to media reports, the empty oil tanker was set ablaze on its way from Sipajhar in Udalguri district. A media report quoting police officials said the driver of the tanker was taken to a private nursing home but he succumbed to severe burn injuries on Saturday morning.

This the third death in state since protests against the Citizenship Amendment Act began in Assam. Two people were killed after police resorted to firing in several places in the city on Wednesday night.

The deceased were identified as Dipanjal Das from Chaigaon, who died in police firing at Lachit Nagar in Ulubari area and 17-year-old San Stafford, who was shot dead by security forces at Hatigaon area of the city.

The All Assam Students Union (AASU), which is spearheading the agitation in the northeastern state, kept up its protest meetings along with Asom Jatiyatabadi Yuba Chatra Parishad (AJYCP) and 30 other indigenous organisations in the Brahmaputra Valley.

Train services between Guwahati and the rest of the country were disrupted in a rail blockade called by the AJYCP. A railway official said all trains to upper Assam districts have been terminated.

Assam Chief Minister Sarbananda Sonowal said the number of people to benefit by the amended Citizenship Act will be "very negligible". The exact number of those people will be disclosed at an appropriate time, he said and urged people to maintain calm.

Police chief Bhaskar Jyoti Mahanta said 85 people have so far been arrested for violence during protests. The situation is under control and police will take stern action against people indulging in violence, he said.

The Meghalaya government has decided to convene a special one-day session of the Assembly to bring in a resolution to implement the Inner Line Permit regime in the state.

In Nagaland schools and colleges were closed, markets were shut and vehicles plied in fewer numbers during the six-hour shutdown since 6 am by Naga Students' Federation against the amended Citizenship Act, officials said.