In West Bengal, agitators resorted to violence and arson at railway stations and thoroughfares across the state, seeking immediate revocation of the law. 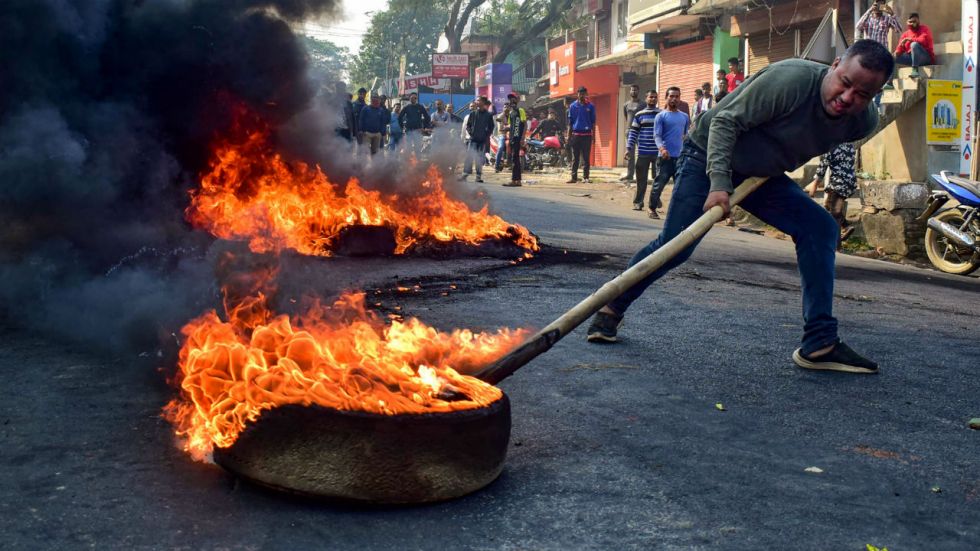 A demonstrator burns tyres on National Highway 17 during a protest rally against CAB, at Boko in Kamrup district of Assam (Photo Credit : PTI )

Protests over the Citizenship Act 2019 spilled over to West Bengal on Friday, while situation in Assam continued to remain tense for the third consecutive day as a total of eight columns of the Army and Assam Rifles were deployed in the state to keep situation under control. The curfew imposed in parts of Shillong following violent protests was relaxed on Friday for 12 hours, beginning 10 am, with no untoward incident being reported from the areas, officials said.

Meanwhile, protests against the amended Citizenship Act continued to rage across northeast, with students' unions in Arunachal Pradesh on Friday boycotting their examination to hit the streets across cities, seeking immediate revocation of the law. A rally demanding the Meghalaya governor's nod to a proposed ordinance seeking mandatory registration of outsiders entering the state turned ugly as the agitators clashed with the police in front of the Raj Bhavan which left 25 injured. The curfew imposed in parts of Shillong following violent protests was relaxed on Friday for 12 hours, beginning 10 am, with no untoward incident being reported from the areas, officials said.

A large number of protesters, including Jamiat Ulama-i-Hind leaders, protested at Delhi's Jantar Mantar on Friday against the amended citizenship law, which they described as "anti constitutional" and "divisive", and demanded its immediate withdrawal. Separately, Jamia Millia Islamia University students held a protest against the law at the university. A third protest was organised by the Delhi Congress in Seelampur area of East Delhi.

In West Bengal, agitators resorted to violence and arson at railway stations and thoroughfares across the state, seeking immediate revocation of the law. People in the minority-dominated districts of rural Howrah, Murshidabad, Birbhum, parts of Burdwan and North Bengal hit the streets in the morning, raising slogans against the Modi government, according to police sources. Some of them even attacked local BJP workers and leaders, prompting the saffron camp to allege that the attacks were masterminded by the ruling TMC.

West Bengal Chief Minister Mamata Banerjee urged people to maintain peace and warned protesters to refrain from taking law into their hands. Governor Jagdeep Dhankhar also made a similar plea. Banerjee, one of the foremost opposition voices against the Citizenship Act and the National Register of Citizens (NRC), declared the amended law will not be implemented in West Bengal. However, Dhankhar opposed her reluctance and said a person holding a constitutional post cannot oppose a law.

"Several parts of the station, RPF kiosks were set on fire and the tracks vandalised. Services have come to a halt here," a senior RPF official said.

In Raghunathganj area of the district, the agitators set vehicles on fire and tore copies of the amended Act. They blocked National Highway-34 and ransacked vehicles and shops.

Several people were injured when their vehicles were pelted with stones.

A huge police contingent was rushed to Beldanga and Raghunathganj to control the situation. The police had to resort to lathicharge in Beldanga to disperse the mob.

The demonstrators, numbering around 250, obstructed the Up and Down lines at Uluberia station and hurled stones at the stranded trains, injuring a driver, South Eastern Railway spokesman Sanjoy Ghosh said.

The railways has sought adequate forces from the state government to protect the station premises in violence-hit areas of the state.

The anti-Citizenship Act demonstrators also blocked NH-6 and burned tyres and tubes at Uluberia. With national flags in hands, they gathered at the Uluberia check-post around 2.30 pm and blocked the highway, one of the arterial roads that connect Kolkata with the rest of the country.

Idris Ali, TMC MLA from Uluberia, said he was visiting Kolkata for medical reasons and would take stock of the situation on his return.

"We do not want India to be divided; we want to protect the Constitution. We are in favour of a secular West Bengal and against the amended Citizenship Act and NRC," said Maulana Ghulam Mustafa of the local Boro Masjid, who was leading the agitation in the area.

In Kolkata, hundreds of protesters gathered at the Park Circus seven-point crossing, seeking the revocation of the law. They shouted slogans against the BJP-led government and burnt tyres on the thoroughfare, leading to traffic congestions in the southern and the central parts of the city.

In Kharagpur section, too, railway tracks were blocked, affecting long-distance train services.  Protesters poured out on the streets in Birbhum and East Midnapore, and shouted slogans against the BJP, demanding that the amended Act be immediately scrapped.

In Hoogly's Arambagh area, protesters came down to the streets and ransacked a police vehicle and thrashed a police officer.

West Bengal BJP general secretary Sayantan Basu's car was attacked by the trouble-mongers in Kanthi area of East Midnapore district. According to local sources, Basu, somehow, managed to drive past the area.

A total of 25 express and EMU trains were detained at various stations due to the ongoing violence in the South Eastern section. Around 26 local trains on Howrah-Kharagpur section have also been cancelled. But around 10 PM, train services resumed on Howrah-Kharagpur route.

At Uluberia station, which bore the brunt of the protest, train services resumed but it would take some time to normalize services, railway officials said.

Later, railway officials and police personnel rescued passengers from some of the stranded trains.

Several noted intellectuals of West Bengal Friday appealed to maintain peace and urged people not to take law into their own hands. The Trinamool Congress leadership blamed the central government's "draconian" Citizenship Act as the main reason behind the violence.

The BJP termed the allegations "baseless" and blamed Banerjee for "fuelling protests" in Bengal. It said the CM was trying to instigate people by spreading misinformation.

West Bengal CPI(M) state secretary Surya Kanta Mishra said the violence is being deliberately instigated by both TMC and BJP to communally polarize the politics of Bengal.

The situation in Assam continued to remain tense for the third consecutive day  against the controversial Citizenship Act.  Eight columns of the Army and Assam Rifles have been deployed in Assam, including capital Guwahati to control the ongoing violent protests.

Defence Public Relation Officer Lt Col P Khongsai said the Army and Assam Rifles were requisitioned by the civil administration in Morigaon, Sonitpur and Dibrugarh districts besides Guwahati to arrest the deteriorating law and order situation. The Army was called out on Wednesday as the protestors turned violent over the Bill.

"Till now, a total of eight columns have been requisitioned which include one in Bongaigaon, one in Morigaon, four columns in Guwahati and two in Sonitpur," he said.

All Army and Assam Rifles columns have managed to restore normalcy in the areas they were deployed and have been continuously working to aid the civil administration, Khongsai added.

Assam is witnessing one of the most violent protests by the people in its history with three railway stations, post office, bank, bus terminus and many other public properties being set ablaze or totally damaged.

Several towns and cities were placed under indefinite curfew, including Guwahati, the epicentre of protests, besides Dibrugarh, Tezpur and Dhekiajuli. Night curfew was imposed in Jorhat, Golaghat, Tinsukia and Charaideo districts.

The Assam government has transferred 10 officials in the rank of superintendent of police in the wake of the violent protest across the state over the amended Citizenship Act, an official order said.

SP (SB) Aparna N was posted as SP Majuli district in place of Hitesh Ch Ray, who is shifted as Commandant 9th APBn Barhampur, Nagaon. The Commandant of 9th APBn Barhampur Rajmohan Ray has been shifted to Guwahati Police as the DCP (Operations). Mugdhajyoti Dev Mahanta, the SP of Cachar district, will be the new SP of Sonitpur, the order said. Sonitpur's SP Kumar Sanjit Krishna is posted as SP of Karimganj in place of Manabendra Dev Ray, who will be the new SP of Cachar.

Rajveer of the Railway Police's SP has become the SP of Lakhimpur, while Harekrishna Nath will move from Lakhimpur to 2nd APBn Makum as its Commandant.

The Commandant of the 2nd APBn Makum Singharam Mili is transferred to Bongaigaon as the new SP, while Subodh Kumar Sonowal will move as SP of Railway Police from SP Bongaigaon. Three Additional Director General of Police and several Superintendents of Police were transferred on Thursday.

President Ram Nath Kovind had on Thursday given his assent to the bill, turning it into an Act. According to the amended Act, non-Muslim refugees, who escaped religious persecution in Pakistan, Bangladesh and Afghanistan and moved to India before Dec 31, 2014, will be granted Indian citizenship.