Dialogue with Pakistan will start the day it stops promoting terrorism: Sushma Swaraj

India will start a dialogue with Pakistan the day it “stops promoting terrorism” against this country, External Affairs Minister Sushma Swaraj said in Parliament on Thursday, saying “terror and talks” cannot go together. 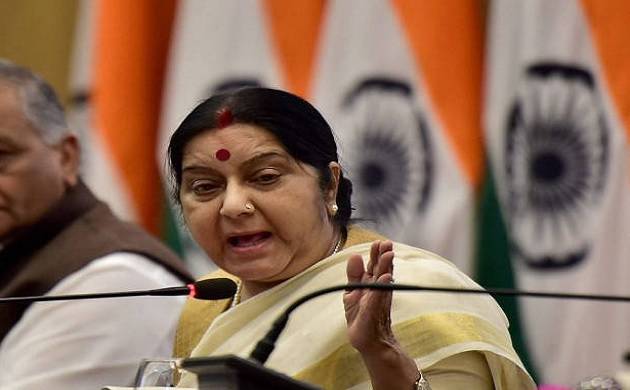 Dialogue with Pakistan will start the day it stops promoting terrorism: Sushma Swaraj

India will start a dialogue with Pakistan the day it “stops promoting terrorism” against this country, External Affairs Minister Sushma Swaraj said in Parliament on Thursday, saying “terror and talks” cannot go together.

A combative Swaraj rejected the Opposition contention that the Modi government has no policy with regard to Pakistan, asserting that it had laid the “roadmap” envisioning peace and normalcy even before it took over.

“But it can’t be one-sided... Terror and talks cannot go together. The day they stop promoting terror, we will start the talks,” she said replying to a discussion on “India s foreign policy and engagement with strategic partners”.

“You are asking what is our Pakistan roadmap? We had declared it even before the swearing-in. We had invited prime ministers of all the neighbouring countries and all came...

Bilateral meetings were also held and I was present,” Swaraj said.

She recalled that the then Prime Minister of Pakistan Nawaz Sharif along with leaders of all other neighbouring countries had been invited to the swearing-in ceremony of the Modi government in May 2014.

Since then, the relations with Pakistan have been witnessing ups and downs, she said.

The external affairs minister said when she visited Pakistan for the ‘Heart of Asia Conference’ on December 9,2015, Sharif had said the dialogue should be started in a new format and it was given the name of Comprehensive Bilateral Dialogue.

Afterwards, Modi went to Lahore as part of that initiative, taking an ‘out-of-box’ decision, she said.

The relations with Pakistan were at such height that on December 25, 2015, when Modi wished Sharif on his birthday, the Pakistani leader asked him to greet him personally. Modi then visited Lahore to so, putting protocol aside.

She said even after the attack on Pathankot Airbase on January 1, 2016, Pakistan, shedding its past practice of being in denial, set up an investigating team to probe it.

“The story changed after (the killing of Hizbul Mujahideen commander) Burhan Wani (in an encounter) when they (Pakistan) declared him as a martyr,” Swaraj said.

She also slammed the Congress for questioning the Modi government’s foreign policy, telling the Opposition party that all the concerns that it was talking about now were born during the previous UPA rule.

“You are the ones who gave birth to the concerns raised now,” she said.

However, while Nehru enhanced his personal image, the present prime minister is enhancing the country’s image through his efforts across the world.