‘Order, order, order’: Bee-line at fuel stations, the saga of Kashmir since FRIDAY

The Same Afternoon, Indian Army Addressed A Presser Revealing That They Have Confirmed Intelligence Reports That Terrorists Backed By The Pakistan Army Are Trying To Disrupt The Amarnath Yatra

It was Friday, the Indian Air Force was put on high operational alert and people were asked not to pay heed to speculations. Omar Abdullah taking lead began questioning the move: “What ongoing situation in Kashmir would require the Army AND the Air Force to be on alert? This isn’t about 35A or delimitation. This sort of alert, if issued, would be about something very different (sic).”

The same afternoon, Indian Army addressed a presser revealing that they have confirm intelligence reports that terrorists backed by the Pakistan Army are trying to disrupt the Amarnath Yatra. Addressing a joint conference with CRPF and Jammu and Kashmir Police, the Army said that they have recovered an IED and a sniper rifle with Pakistan ordnance factory markings enroute the pilgrimage. "An M-24 American sniper rifle with a telescope was also recovered from a terror cache along Shri Amarnath ji route," Chinar Corps Commander Lt General KJS Dhillon said.

Adding to the speculations came a series of orders.

An advisory was issued asking tourists and Amarnath Yatris to "immediately" curtail their stay in the Valley and return to their homes "as soon as possible". The advisory by Principal Secretary to Government Shaleen Kabra, read, "given the prevailing situation in Kashmir, it will be in the interest of safety and security of the tourists and Amarnath Yatris to leave the Valley." 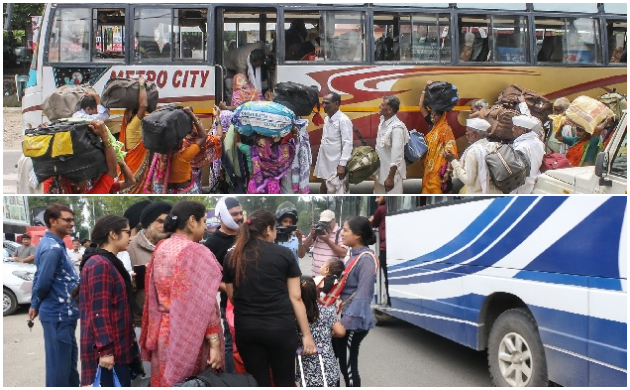 This order pressed the panic button in Valley. Locals sense scrapping special status of the state could be a part of Centre's plan. People began lining up to buy essentials, with long queues reported at fuel stations, grocery stores, pharmacies and ATMs. Owners of petrol pumps in Srinagar asked the government to provide security cover as locals were seen engaging in verbal spat with fuel station staffers. 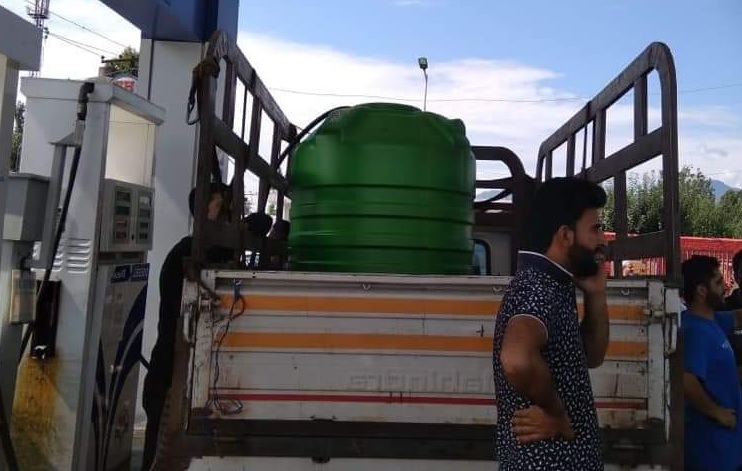 Earliest to respond was Mehbooba Mufti: "This is some sort of a psychological war. There are reports of tinkering with special status of Jammu and Kashmir. With folded hands, I am appealing to the people of India and the PM that this should not happen. J&K had decided to go with India on these constitutional guarantees and today, it seems these guarantees are being trampled upon."

By midnight, the same day, the high profile pollitical meet played out in Srinagar’s posh Gupkar as PDP chief Mehbooba Mufti taking lead met her political rivals NC chief Farooq Abdullah, Sajad Lone and Shah Faesal. The delegation then left for Raj Bhawan to meet Governor Satya Pal Malik, urging him that New Delhi shouldn’t tinker with Jammu and Kashmir’s special identity. Lone, who has advocated for the Bharatiya Janata Party (BJP) in the state said, "I will unconditionally support collective efforts for protecting the special status of J-K. I am ready to go to anyone and anywhere for supporting the collective efforts.”

A day after an unprecedented "Leave Valley" advisory to tourists and Amarnath pilgrims, a fresh notice was issued to students of the National Institute of Technology (NIT) asking them to evacuate campus in Srinagar. "The above notice stands issued in accordance with instructions received from the district administration, Srinagar," the notice read.

All the non-local students carrying their luggage were seen waiting for buses to ferry them outside the Valley on Saturday morning. An official at the NIT said that the administration has been asked to send students home in the view of this prevailing condition in the state. 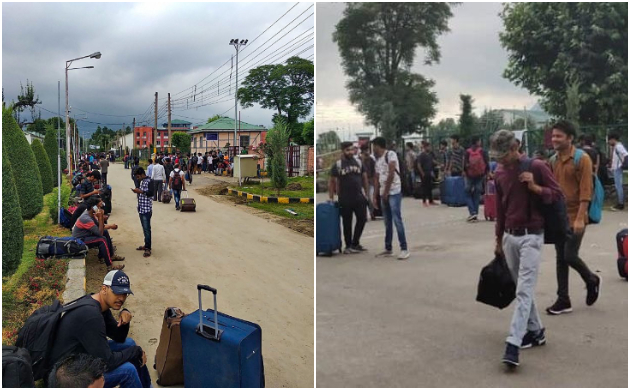 The order came amidst Indian Army foiled an infiltration bid by Pakistan Army's BAT on forward post in Keran sector on Saturday evening, killing at least five to seven soldiers or terrorists. The BAT generally comprises special forces personnel of the Pakistani Army and terrorists. The order took social media by storm yet again.

Kashmir is already one of the world’s highly militarised zone. It all started with the two-day Kashmir visit of National Security Advisor Ajit Doval last month. Soon after Doval returned to Delhi, the Centre decided to move 10,000 troops of the paramilitary forces to Jammu and Kashmir.