"Some people in the Rajya Sabha are calling Jharkhand a hub of lynching. Is this fair? Why are they insulting a state? None of us have the right to insult the state of Jharkhand," the prime minister said

Prime  Minister Narendra Modi on Wednesday addressed the Rajya Sabha in his reply to Motion of Thanks on President's address in the upper house of Parliament. During his address PM said that the death of a 24-year-old man who was thrashed by a mob in Jharkhand last week has "pained" him, but it is unfair to insult the state by calling it a "hub of lynching".

"Some people in the Rajya Sabha are calling Jharkhand a hub of lynching. Is this fair? Why are they insulting a state? None of us have the right to insult the state of Jharkhand," the prime minister said. Congress president Rahul Gandhi had earlier took to Twitter and said he is shocked by the "silence of the powerful voices in the BJP-ruled central and state governments".

"The brutal lynching of this young man by a mob in Jharkhand is a blot on humanity. The cruelty of the police who held this dying boy in custody for 4 days is shocking as is the silence of powerful voices in the BJP ruled Central & State Govts. (sic)" Rahul Gandhi had tweeted on Tuesday evening.

Prime Minister Narendra Modi also launched a scathing attack on the Congress in the Rajya Sabha, saying it insulted voters of the country by questioning veracity of EVMs and the massive victory of the BJP in Lok Sabha polls.

Replying to the debate on the Motion of Thanks to the President's address, Modi said there was a limit to the arrogance of the opposition party as it has put voters in the dock by questioning their verdict. He said there is a problem with the Congress as it does not accept defeat and cannot digest victory.

The prime minister said that by using such language the Congress has hurt voters of the country. "I was saddened when some leaders said - the BJP and allies won the elections but the nation lost, democracy lost. I want to clearly say that such statements are unfortunate. Why question the wisdom of voters," he asked.

Going by the Congress party's arguments, he wondered whether victory of the Congress in Wayanad and Rae Bareli seats too were "defeat of the country".

"Due to narrow-mindedness and perversity of thoughts, if some people do not accept mandate of the people by saying that 'you may have won the election but the country has lost', there can be nothing more insulting for our democracy than this," he said.

The prime minister also hit out the Congress for questioning EVMs, which have been lauded globally. The prime minister said the world must know more about "our electoral processes as the scale is immense. Some people kept talking about the EVM issue in this House," he said.

"I want to tell them- there was a time when we were 2 MPs in Parliament. People mocked us. But, we worked harder and won the trust of people. We did not make excuses and blame the polling booth. Let us appreciate how our electoral processes have improved," he said.

"In the 1950s the polling process took so much time and violence and booth capturing were common in some places. Now, the news is about rising turnout. This is a healthy sign," he noted.

The prime minister said there have been so many polls with EVMs and parties that are represented in the Rajya Sabha have got opportunities to govern in some state or the other after elections conducted through EVMs. "Then, why question EVMs today," he asked.

The prime minister said, "We are seeing this same attitude when it comes to discussing 'One Nation, One Election'." "Yes, people may not like the idea or have inputs on this. But, it is important to present these ideas and have discussions on the subject," he said.

PM Modi wondered why opposition parties were opposing the idea of 'New India', asking them not to thrust the people of the country towards negativity by opposing it, as this was a sin. "Do we need that Old India where Cabinet proposals were torn in press conferences or where there are scams all over and support is extended to 'tukde tukde' gang. Do we need that old India where there was corruption," he said, adding people of the country were not ready to take India behind.

He urged opposition members to take the country forward and expected them to contribute in doing so. PM Modi said those opposing EVMs are not only opposed to EVMs, they have problems with technology, digital transactions, Aadhaar, GST, Bhim App.

"Why such negativity? This negativity was one of the chief reasons why some parties have not been able to win people's trust," he said. The prime minister also said that he was saddened by the lynching incident in Jharkhand.

"The lynching in Jharkhand has pained me. It has saddened others too. But, some people in the Rajya Sabha are calling Jharkhand a hub of lynching. Is this fair? Why are they insulting a state. None of us have the right to insult the state of Jharkhand," he said.

PM Modi noted that whether it is Jharkhand, or West Bengal or Kerala, incidents of violence should be treated in the same manner and perpetrators of violence get a lesson that the entire country is one on this issue. 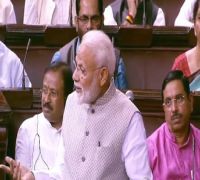 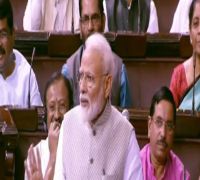 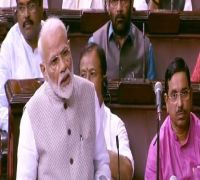