Pakistan is expected to present a dossier on Kashmir at the United Nations Human Rights Council in Geneva.

Rahul Gandhi and Omar Abdullah had made these statements in the aftermath of abrogation of Article 370 provisions in Jammu and Kashmir (Image: File)
HIGHLIGHTS

Pakistan is likely to quote Rahul Gandhi and Omar Abdullah in their dossier on the Kashmir issue at United Nations Human Rights Council, according to sources. It has been reported that Pakistan will present a 115-page dossier on Kashmir at the UNHRC. An alleged leaked picture of the dossier has been circulating in Pakistani media circles. The opening page of the document shows quotes by former Congress president Rahul Gandhi and former Jammu and Kashmir chief minister Omar Abdullah.

A leaked document, reportedly the Pakistani dossier to be presented by them at UNHRC today, circulating in Pak media circles. The opening page of the document shows quotes by Congress leader @RahulGandhi & National Conference's @OmarAbdullah, reports ANI.https://t.co/zKZjg3wWwA pic.twitter.com/fzufc2UVFt

This is not the first time Pakistan had tried to use statements by Rahul Gandhi to raise the issue of Kashmir at international forums. Earlier, in its letter to the United Nations over the alleged human rights violations in Jammu and Kashmir, Pakistan has mentioned the names of Gandhi and Haryana chief minister Manohar Lal Khattar.

The Indian delegation is expected to make make its statement some hours later and will have the “right of reply”.

Earlier, Pakistan’s foreign minister Shah Mehmood Qureshi left for Switzerland on Monday to represent his country at the 42nd session of the UNHRC. He tweeted that Pakistan will “speak definitively” at the session on alleged “atrocities in Kashmir”. Qureshi will make a country statement at noon Geneva time.

Pakistan may call for urgent debate on Kashmir or move a resolution citing alleged human rights violations in Kashmir. Either of these will need to be put to a simple majority vote with absentees or abstentions not being counted.

The Indian side will be led by a secretary from the external affairs ministry and will include Ajay Bisaria, till recently the high commissioner in Islamabad.

ALSO READ: India Hits Back At China-Pakistan For Mentioning Kashmir In Joint Statement

Pak Has Nothing To Do With Whatever Happens In India: Congress

Amid reports of Pakistan's plans to raise the Kashmir issue at the UN Human Rights Council, the Congress has said with what face will that country talk about Kashmir after releasing JeM chief Masood Azhar, who is issuing threats to Indian security forces.

The Congress's attack on Pakistan came after reports that Islamabad has released Jaish-e-Mohammed chief Azhar to carry out terror attacks in India.

Asserting that Pakistan has "no locus standi" on Kashmir, senior Congress leader Shashi Tharoor said that after what Pakistan has done by changing the status of Gilgit-Baltistan and Pakistan-occupied Kashmir (PoK), how can it raise a finger at India.

"Pakistan has nothing to do with whatever happens within India. Whatever happens in India is our issue. We are in the Opposition, so we can criticise the government, but we are united outside the country and will never yield even an inch to Pakistan," he said on the sidelines of a party event here.

Asked about Pakistan Foreign Minister Shah Mahmood Qureshi's plans to raise rights issues in Jammu and Kashmir following abrogation of its special status, Congress spokesperson Pawan Khera said, "As we speak, Maulana Masood Azhar is issuing threats to the Indian forces and openly advising security forces to attack our security forces. With what face will the Pakistani foreign minister speak to the UNHRC about anything on Kashmir." 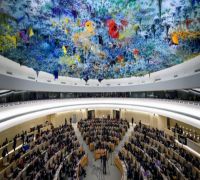 UNHRC Meet: India Ready With Rebuttal As Pakistan May Present Dossier On Kashmir 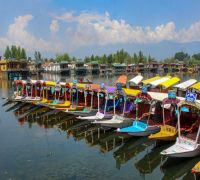 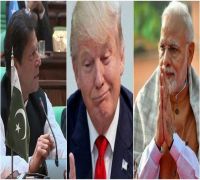