In an interaction with a 17-member delegation of Kashmiri Pandits, PM Modi assured them of “building a new Kashmir” which would belong to everyone.

The delegation presented a memorandum to PM Modi. (File Photo)

A delegation of Kashmiri Pandits met Prime Minister Narendra Modi in Houston on Sunday and thanked him for his government’s decision to revoke Article 370 that granted special status to the state of Jammu and Kashmir.  In an interaction with a 17-member delegation of Kashmiri Pandits, PM Modi assured them of “building a new Kashmir” which would belong to everyone. Thanking PM Modi for the revocation of Article 370, the delegation said that their 700,000 community members were “indebted” to his government.

I had a special interaction with Kashmiri Pandits in Houston. pic.twitter.com/07coxdg0oS

The delegation presented a memorandum to PM Modi and requested him to set up a task force under the Ministry of Home Affairs to bring the community together, develop the region and repatriate Kashmiri Pandits, reports PTI.
Rajiv Pandit, who was part of the delegation, recited 'Namaste Sharade Devi' shloka for Modi and the Indian leader joined him by reciting its last line.

PM Modi thanked the community for their patience for over 30 years and later tweeted, “I had a special interaction with Kashmiri Pandits in Houston.”

“The Prime Minister told us you have suffered a lot and together we have to build a new Kashmir.” PTI quoted Surinder Kaul, who led the delegation, as saying.

Another Kashmiri Pandit delegate from New Jersey, Rakesh Kaul said that meeting Modi during was important to give him (Modi) unequivocal support at the global level for revoking Article 370 and request him to initiate steps which will address the ethnic cleansing of Kashmiri Pandits.

On August 5, the Indian government revoked the special status given to Jammu and Kashmir and bifurcated it into two union territories. 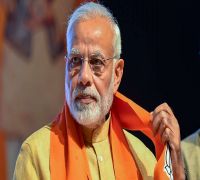 ‘Help Sindh Get Freedom Like Bangladesh Was Liberated in 1971’: Activist Urges PM Modi 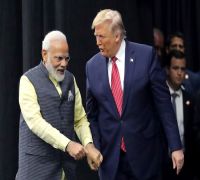 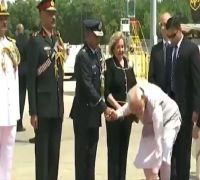