Jaitley died at the All India Institute of Medical Sciences (AIIMS) in New Delhi on Saturday afternoon after battling multiple health issues for the last several months.

Earlier, PM Modi spoke to family members of Jaitley who had requested him not to cut short his oversee tour due demise of the veteran BJP leader. It is well known that PM Modi shared a very strong bond with the late Union minister.

Jaitley died at the All India Institute of Medical Sciences (AIIMS) in New Delhi on Saturday afternoon after battling multiple health issues for the last several months. He was 66. He was admitted to the hospital on August 9.

"My friend Arun Jaitley loved India, loved his party and loved being among people. It is upsetting and unbelievable that a person I have known since our youth is no longer in our midst," Prime Minister Modi had tweeted.

"I cannot imagine that I am here in Bahrain while my dear friend Arun Jaitley is no more," PM Modi had said while addressing a huge gathering of 15,000 members from the Indian community at the Bahrain National Stadium on Saturday.

Describing Jaitley as a ‘valued friend’, the prime minister said his insights and nuanced understanding of matters had ‘very few parallels’.

"At a time at a time when people are celebrating Janmashtami, I am mourning the death of my friend Arun," he said.

Earlier in his tweets, Modi said Jaitley was admired by people across all sections of society, adding that he was multi-faceted, had impeccable knowledge about India’s Constitution, history, public policy, governance and administration.

“With the demise of Arun Jaitley Ji, I have lost a valued friend, whom I have had the honour of knowing for decades. His insight on issues and nuanced understanding of matters had very few parallels. He lived well, leaving us all with innumerable happy memories. We will miss him!” he said.Modi also recalled Jaitley’s contribution to the BJP.

“BJP and Arun Jaitley Ji had an unbreakable bond. As a fiery student leader, he was at forefront of protecting our democracy during the Emergency. He became a much liked face of our Party, who could articulate the Party programmes and ideology to a wide spectrum of society,” he said. 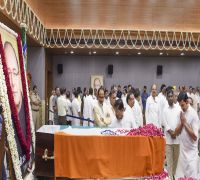 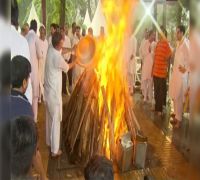