The gun weighs 50 tonnes and can fire 47kg bombs at 43-kilometre distant targets. It can also turn around at zero radius. 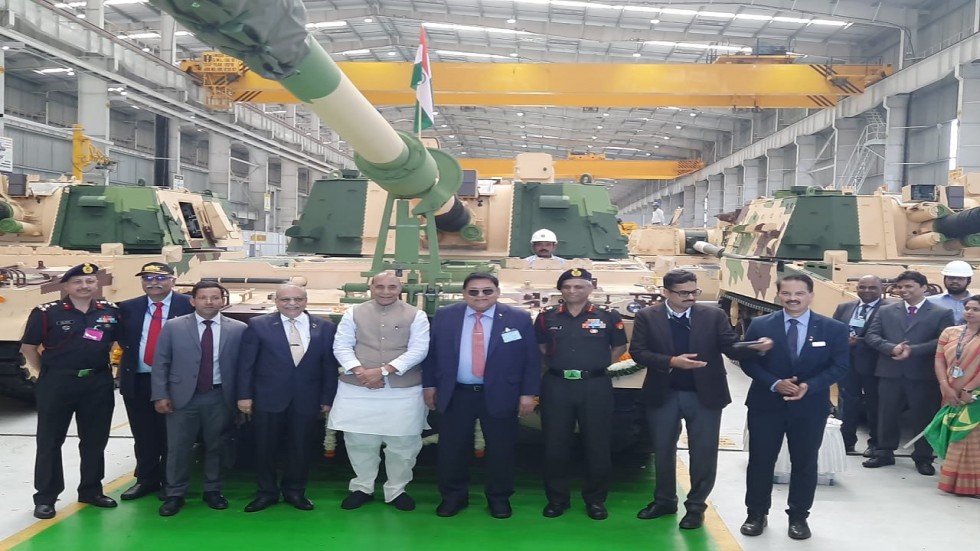 Defence Minister Rajnath Singh on Thursday flagged off the 51st K-9 Vajra-T gun at the Larsen and Toubro Armoured Systems Complex at Hazira, Surat. Singh sat in the vehicle on which the gun was mounted and was driven around the Hazira complex. The gun weighs 50 tonnes and can fire 47kg bombs at 43-kilometre distant targets. It can also turn around at zero radius.

L&T had in 2017 won the Rs 4,500-crore contract from the Ministry of Defence to supply 100 units of K9 Vajra-T 155 mm/52 calibre tracked self-propelled gun systems to the Indian Army under the Centre’s ‘Make in India’ initiative.

The K9 Vajra contract involves delivery of 100 such systems in 42 months, which is the largest contract awarded to a private company by the Ministry of Defence.

Rajnath Singh also put ‘tilak’ and drew the auspicious ‘swastik’ symbol with kumkum on the new artillery. During the puja, he also offered flowers to the gun and broke a coconut.

Last year, Prime Minister Narendra Modi shared a brief video of himself standing in a tank on his Twitter handle. "Checking out the tanks at L&T's Armoured Systems Complex in Hazira," Modi said in the tweet.

“I congratulate the entire team of Larsen & Toubro for building the state-of-the-art K-9 Vajra Self Propelled Howitzer. This is a significant contribution towards India’s defence sector and protecting the country… Boosting ‘Make in India’ in the defence sector is our endeavour. I am glad that the private sector too is supporting this pursuit and making a valuable contribution,” the Prime Minister tweeted after the inauguration. He, however, did not address people at the inauguration.

Defence Minister Nirmala Sitharaman and A M Naik, Minister of Defence Acquisition of the Republic of Korea Wang Jung Hong and L&T Group Chairman A M Naik were present on the occasion.