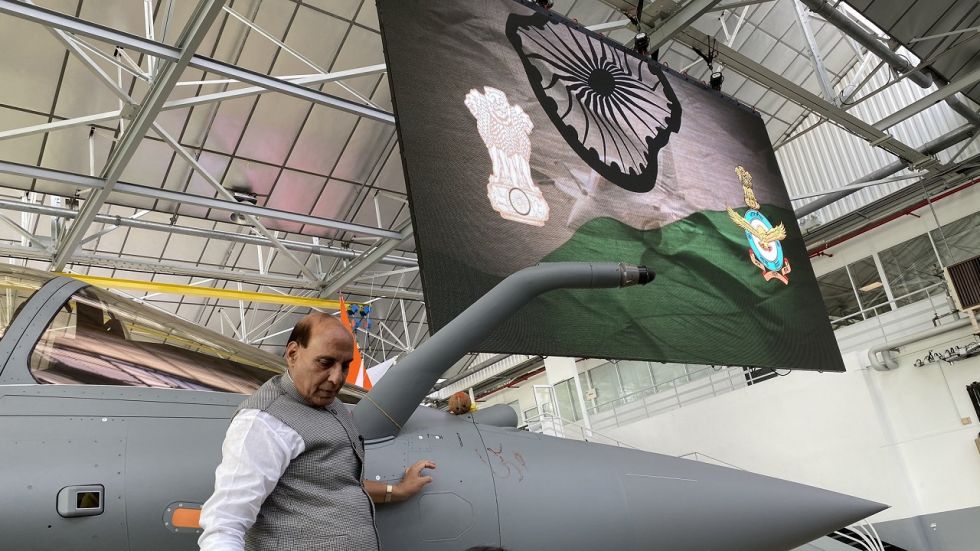 Rajnath Singh emblazoned the aircraft with an 'Om' tilak and laid flowers and a coconut on Rafale jet. (Photo Credit : @rajnathsingh )

Defence Minister Rajnath Singh on Tuesday officially received the first Indian Rafale jet from France. This is one from a series of 36 such aircraft purchased for the Indian Air Force (IAF) from France. Before taking off for a sortie in the first sophisticated and state of the art fighter jet, the Defence Minister performed 'Shastra Puja', a ritual involving the worship of weapons, on the auspicious occasion of Vijayadashami.

During the brief ‘Shastra Puja’ Rajnath emblazoned the aircraft with an 'Om' tilak and laid flowers and a coconut on the jet. “Performed Shastra Puja on the auspicious occasion of Vijayadashami. Worshipping weapons on Vijayadashami has been our Tradition,” he tweeted.

“Our Air Force is the fourth-largest in the world and I believe that the Rafale Medium Multi-Role Combat Aircraft will make us even stronger and will give a boost to India’s air dominance exponentially to ensure peace and security in the region,” Singh said, addressing the gathering in Hindi.

“I have been told that the French word Rafale means ‘andhi’ in Hindi or gust of wind. I am sure that the aircraft will live up to its name,” he said.

This range of Rafale fighter jets have been specially designed to meet the needs of the IAF, which its manufacturer described as a new step in the company’s long-standing relationship with India.

India had ordered 36 Rafale fighter jets from France in a deal worth Rs 59,000 crore in September 2016. While the formal handover ceremony takes place this week, the first batch of four Rafale jets will fly to their home base in India by May 2020. All 36 jets are expected to arrive in India by September 2022, for which the IAF has been reportedly undertaking preparations, including readying required infrastructure and training of pilots.

The Rafale is a twin-jet fighter aircraft able to operate from both an aircraft carrier and a shore base. The manufacturers describe it as a fully versatile aircraft which can carry out all combat aviation missions to achieve air superiority and air defence, close air support, in-depth strikes, reconnaissance, anti-ship strikes and nuclear deterrence.