The students claim that the policemen offered the tea but didn’t allow the agitators to meet the DCP of Vasant Kunj zone. 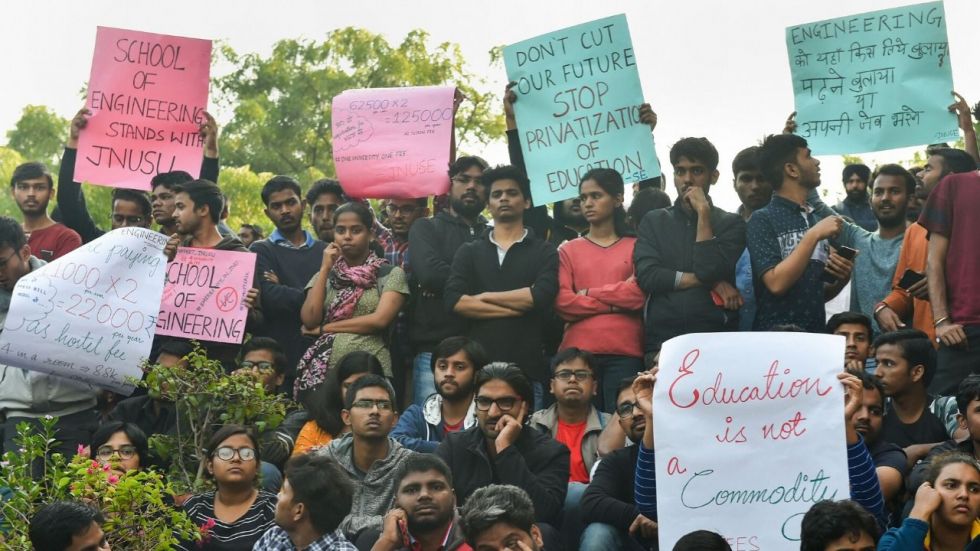 JNU Visually Challenged Students’ Forum has called for a demonstration against the "Brutal Lathi charge of Delhi Police" and demand for justice for persons with disabilities. (Photo Credit : PTI Photo )

The controversy surrounding the alleged brutality by the Delhi Police personnel against the protesting JNU students refuses to go. On Wednesday, the ‘Divyang’ students of the Jawaharlal Nehru University said that top police officials refused to meet them despite repeated assurances. Members of the JNU Visually Challenged Students Forum said that first they were escorted to new police headquarters. However, later their bus was stopped and taken to Vasant Kunj police station. The students claim that the policemen offered the tea but didn’t allow the agitators to meet the DCP of Vasant Kunj zone.

The Divyangs have said that the policemen thrashed them during the Monday lathicharge, an allegation vociferously denied by the Delhi Police. However, a video that surfaced online that clearly showed the policemen dragging the Divyang students away from the site.

Shashi Bhushan Pandey, a visually challenged student who is also a JNUSU SSS councillor, claimed that police beat him up even when he told them he is "differently-abled", while JNU Students' Union president Aishe Ghosh alleged that women students were "manhandled and groped" by male policemen.

In a video circulating on social media, Pandey can be seen being pushed by policemen during the protests. On camera, he was seen removing his glasses and telling police he is blind. However, despite that, he was manhandled by the police.

Meanwhile, the JNU Visually Challenged Students’ Forum has called for a demonstration against the "Brutal Lathi charge of Delhi Police" and demand for justice for persons with disabilities.

On Tuesday, the Delhi Police registered three FIRs in connection with the JNU protest march. The case were registered against students for violating the prohibitory orders. The police said that the students climbed the barricades twice despite warning them about the prohibitory orders. Two FIRs, one in South district and another in South-West district, have been registered under appropriate sections of the Indian Penal Code. Around 30 police personnel and 15 students were injured during a march to Parliament protest led by JNUSU against a hostel fee hike in New Delhi on Monday, said the Delhi Police. The Delhi Police registered a case under section 186/353 of the IPC at Kishan Garh Police station . Case was registered from the police side.