In a special show "Sab Dikhta Hai", News Nation joins hands with the visually impaired "Divyang" brothers and sisters to help them reach their life goals. 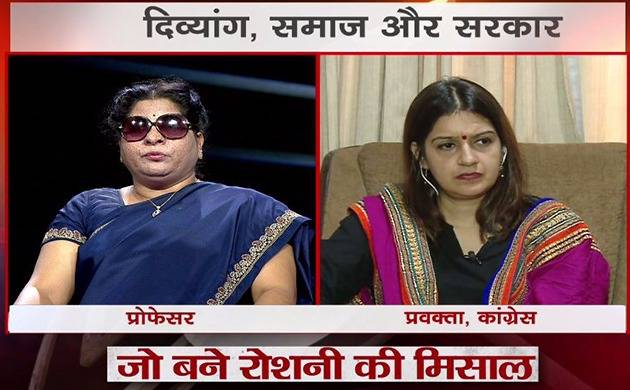 "Blindness is not a barrier to success" and Jacob Bolotin is the biggest example of this. Jacob, a born blind went on to become world's first blind doctor, a feat that most like him could not even dream. There are many more success stories like Jacob's when people with no vision became one of the greatest visionaries.

News Nation has decided to become the voice of such people who want to achieve their goals but lack support from the government as well as the society.

We will try to understand their everyday struggle and raise their issues with governments. We will also compare what if their condition has improved or not in the last 70 years of Independence.

In a special show "Sab Dikhta Hai" on Thursday at 6 PM, News Nation will join hands with our visually impaired "Divyang" brothers and sisters to help them reach their life goals. Congress spokesperson Priyanka Chaturvedi and BJP's Shaina NC along with special Divyangs will be our guests.

Here are the highlights of the Show:

# A lot of job opportunities can be exercised by the visually impaired citizens via government's Skill India program: Shaina NC, BJP

# All issues pertaining to the blind citizen come under the Ministry of Social welfare which has always been short on funds, says SK Rungta.

# Priyanka Chaturvedi says, she herself will take up the issue with President and Vice President. She also assures her party will raise the issue in Parliament.

# Professor Kusum Lata asks Priyanka Chaturvedi whether Congress will nominate a Rajya Sabha member from the blind section of the society.

# Every class of the society should get a chance, says Priyanka Chaturvedi on SK Rungta's suggestion.

# Peenaj asks Shaina, Should there be reservation for visually impaired in the Parliament.

# It's unfortunate that government is not paying any attention towards visually impaired sportsperson: Inder Kumar, Former Cricketer

# Approximately, 50 Lakh people in the country are visually impaired, most of these people reside in the rural parts of India.

# Peenaj is joined by eminent visually impaired personalities who have accomplished a lot in their respective fields.