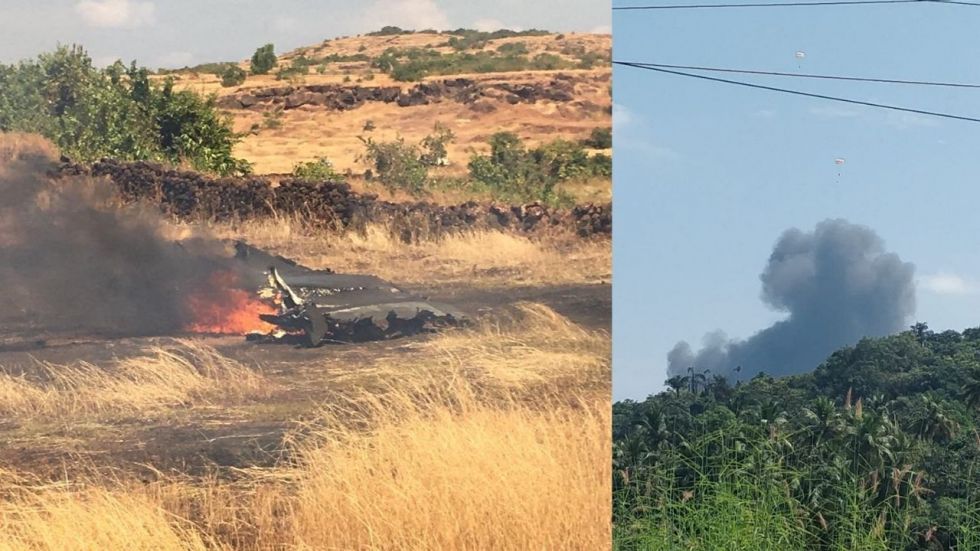 A MiG-29K fighter aircraft crashed in Goa soon after it took off for a training mission, according to Indian Navy sources. They said both pilots have managed to eject safely. The aircraft involved in the crash was a trainer version of the fighter jet.

"At about noon on 16 Nov 2019, a MiG-29K twin seater aircraft, on a routine training sortie, encountered a flock of birds after take off from INS Hansa Air Base at Dabolim Goa. The pilot observed the left engine had flamed out and the right engine had caught fire. Attempts to recover the aircraft were unsuccessful due to damage and low height. The pilot, showing presence of mind, pointed the aircraft away from populated areas and both pilots ejected safely. An enquiry has been instituted by the Navy. The pilots Capt M Sheokhand and Lt Cdr Deepak Yadav are safe and have been recovered. There has been no loss of life or damage to property on ground," Indian Navy informed.

A #MiG29K fighter aircraft crashed in Goa soon after it took off for a training mission, earlier today. Both the pilots managed to eject safely. The aircraft involved in the crash was a trainer version of the fighter jet, reports ANI.

Indian Navy Flag Officer, Goa, Rear Admiral Philipose George Pynumootil said the aircraft was on a regular training sortie when the incident happened. The aircraft is attached to INS Hansa located near Dabolim in Goa.

Defence Minister Rajnath Singh also talked to Captain M Sheokhand and Lt Commander Deepak Yadav. "It is a matter of great satisfaction that they managed to eject in time and both of them are safe. I pray for their good health and well-being," he said.