Tamil Resonating Across United States After My UNGA Speech: PM Modi In Chennai 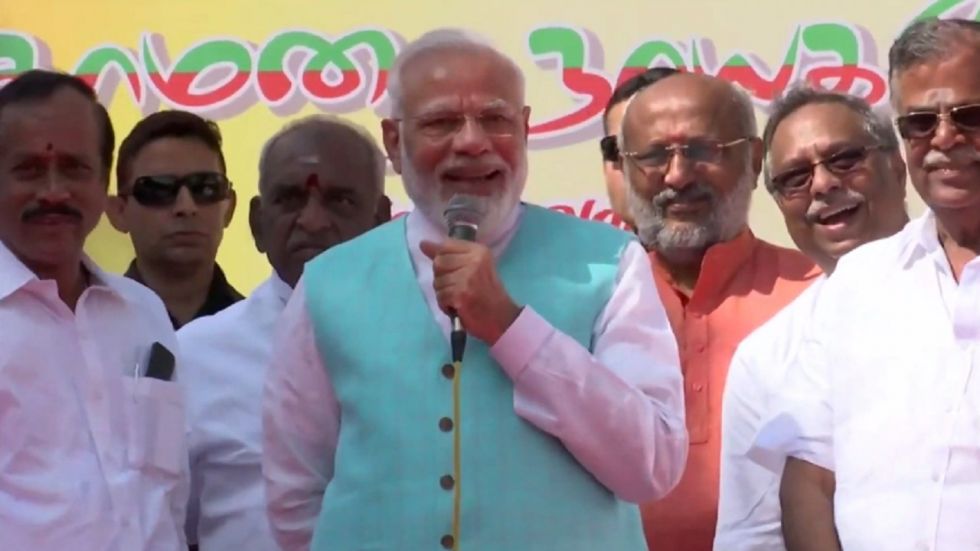 Tamil, the ancient Dravidian language is now echoing across the United States following his speech at United Nations General Assembly (UNGA) session last week, said Prime Minister Narendra Modi, who is on a day-long visit to Chennai on Monday. "During my visit to the United States, when I spoke in Tamil and told the world about the world's oldest languages, it was received well and is now being resonated across the north-American country," Modi told the BJP cadres at Chennai airport this morning.

Addressing the 74th session of UN General Assembly on September 27, the prime minister invoked famous Tamil poet Kaniyan Pungundranar, seeking collective efforts to address serious global challenges. "3000 years ago, a great poet of India, Kaniyan Pungundranar, wrote in Tamil 'Yaadhum Oore Yaavarum', which means 'We belong to all places, and to everyone'," Modi was quoted as saying at UN.

The prime minister, who arrived in his maiden visit to Tamil Nadu after retaining power in 2019 Lok Sabha elections, said he was supposed to deliver a speech at IIT-M today but after seeing the cadres in large numbers he has decided to address them at the airport itself. "I am extremely happy and grateful for the welcome that I have received today," he said wishing the party workers with traditional greeting Vanakkam.

Rousing welcome of PM Shri @narendramodi on his arrival at Chennai Airport. https://t.co/N9Io4xiK62

Modi also asserted that the world has "great expectations" from India and the government will lead the country to a path of 'greatness' where it will be beneficial to the entire globe. The prime minister, however, added that making the country great was not just the job of the Central government, but also its 130 crore citizens.

READ | Can You Do Something For Me? PM Modi Has THIS Message For Indians In US

Reiterating his campaign against single-use plastic, Modi said, "With this year marking 150 years of Mahatma Gandhi's birth anniversary, we will be undertaking a pad yatra where we will be visiting people in cities and villages and educate them about the ban on single-use plastic".

Modi was in the city to participate in Singapore-India Hackathon 2019 being held at the Indian Institute of Technology (IIT)-Madras. Besides, Modi also attended the 56th convocation of IIT-Madras and is scheduled to take part in an exhibition at the IIT premises.