Rhea Kapoor who is with Sonam on her Cannes journey at the French Riviera this year and has always been her stylist decoded her looks and revealed interesting details about them all.

Sonam Kapoor is back to her best creating ripples at the red carpet with her sartorial fashion choices that she carries off with elan and looks drop dead gorgeous.

The actress has so far pulled out five looks starting with a valentino red gown with extended ruffled sleeves and then sporting multiple attires like a purple Elie Saab gown with an extravagant bow and cape, modern-maharani couture in gold, white tuxedo with a long trail and a princessy lemon yellow dress. All of Sonam's looks created were game changers and send out quite a fashion statement strong enough to take Cannes by storm.

Rhea Kapoor who is with Sonam on her Cannes journey at the French Riviera this year and has always been her stylist decoded her looks and revealed interesting details about them all.

For her modern-maharani couture look witha golden veil, Rhea shared, "And the other look was inspired by an old Hollywood actress that kind of took inspiration from a Maharani. So it was a mix of old Hollywood and Indian Royalty, and I tried to put both the elements in her red carpet looks."

Sonam combined modernity and traditions in her white tuxedo look by Ralph and Russo with a striking trail and emerald jewellery. Rhea revealed that the theme of the look was India and royalty. "One of Sonam's looks was inspired by the Raja of Patiala which was her red carpet look and it was the modern rendition of that time of tux and emeralds." she said.

Her lemon yellow gown that she sported for press interaction from earlier today, complemented the serene surroundings. Her dress painted a romantic picture with roses placed in symmetry in the background. About which, Rhea explained, "It was inspired by classic romance. It was an idea about timeless love and romanticism because that's the place Sonam is in her life and that's what is inspiring me right now. Because I feel we need to go back to something which is pure and beautiful." The look mentioned that tt promotes sustainable luxury and is made of precious materials from nature.

I had the incredible honour of Launching the incredible collection Garden Of Kings from @chopard It promotes sustainable luxury and is made of precious materials from nature. What a moving story behind everyone of the #chopardparfums from this collection. ☀️ custom @ashistudio

Revealing further about their mutual trust in choosing looks , Rhea said ""Sonam completely trusts me with the looks that I put together. I run them by her on and off when I'm in the process, but she pretty much gives me 100% freedom, said Rhea. "

She further added, "Then we do the fittings and whatever she feels comfortable in and makes her look the best is what we go with. But we've been working together for so many years now that we kind of understand each other." 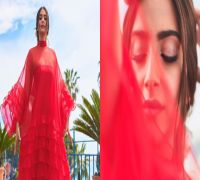 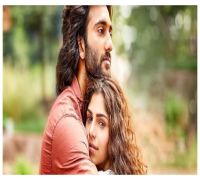 Sanjay Leela Bhansali gets 'emotional' as he launches niece Sharmin 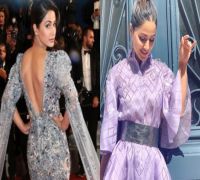 Hina Khan unveils poster of 1st feature film Lines at Cannes; here's everything about her character and story