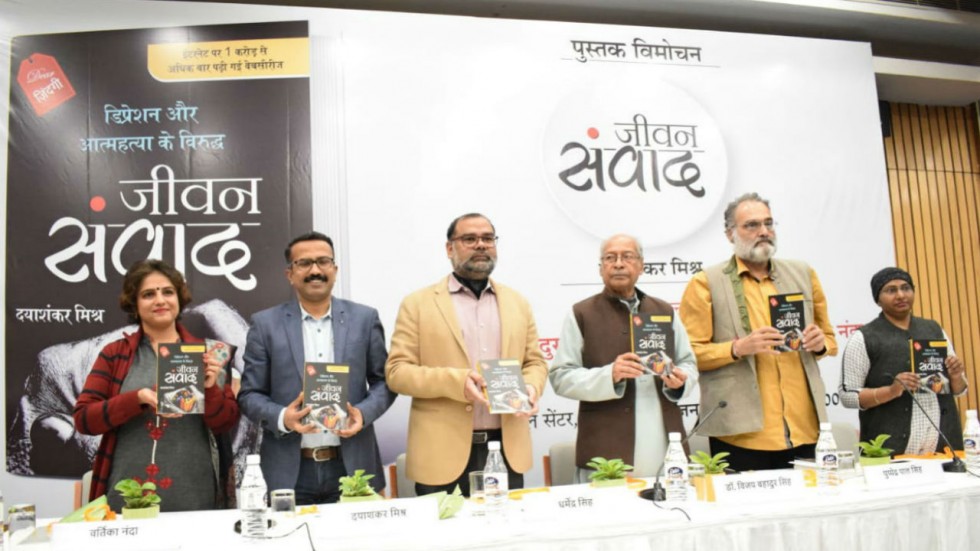 Senior journalist Dayashankar Mishra's web series 'Dear Zindagi' gained quite a loyal fanbase and millions of views online. The series is now come out in the form of the book, 'Dear Zindagi-Jeevan Samvad'.

Dr. Vijay Bahadur Singh praised the author saying such easy-to-read and interesting writing was a unique trait of his writing. He added that such content on depression was not available to Hindi readers so far. He pointed out that while much has been written and said about suicide and depression with a western viewpoint, Dayashankar's book deals with these issues combining both an Indian traditional viewpoint and the modern aspect.

Talking about the book, the author Dayashankar Mishra said that it features 64 out of his 650 web articles on these topics. Recalling his experience, he revealed how his articles helped many people deal with depression and suicidal tendencies. He said that the book aimed to make people understand depression better and prevent suicides.

Pushpendra Pal Singh said that this book was useful for young people as well as children. He highlighted how young people are feeling tremendous pressure in both professional and personal life. Most of these young people are unable to talk about their situation with anyone and that puts them into fatal danger. He hoped that when such youngsters will read this book, they will feel as if they are talking to a friend about their problems.

Sheel Saini, a cancer survivor, said that the articles gave her ‘Jeevan Sanjeevani’ while she was struggling between life and death in the hospital. Saini said that this book is not just to fight depression but will also help anyone who is unable to see lies ahead in their life. This book is like a friend who is extending a helping hand to those who are in grief and suffering.

Dharmendra Singh said that we need to adapt our lifestyle according to the needs of the times. He talked about how people in India are not very conscious about mental health. He pointed out how it was considered a shame to tell others about depression in our society. He hoped that the book will help end such misconceptions and help people dealing with these issues.