Netizens, Who Are Praising Aparna For Her Out-of-the-box Act Also Include Bollywood Actress Anushka Sharma, Who On Friday Shared An Instagram Story To Appalud The Gesture.

They say, "Beauty is not in the face, but is a light in the heart". Aparna Lavakumar, a 46-year-old Kerala policewoman, has proved every word of this English proverb right with her heartening move yet again on Tuesday. Lavakumar, the senior civic police officer in Kerala's Thrissur district, did not think for a second and went bald after she met a little cancer patient in recent past. She shaved her head off and donated the hair to an NGO that makes wigs for those battling the deadly disease.

While this mindboggling gesture of Aparna is winning millions of thumbs up online, this was not a big deal for her. Speaking to media she said her act does not need to be glorified as she did nothing in comparison to those who donate organs to save lives. Earlier too, she threw a challenge to the so-called beauty standard of our conventional society and chopped her hair to help those in need.

READ | Sonali Bendre on going bald: My hair was very much part of my personality

"I used to contribute my hair regularly. But this time I thought of tonsuring completely after I came across a bald young boy, a cancer survivor. I found the boy was literally struggling to cope with his new appearance," she told Hindustan Times.

Netizens, who are praising Aparna for her "out-of-the-box" act also include Bollywood actress Anushka Sharma, who on Friday shared an Instagram story to appalud the gesture. For her fellow colleagues Aparna is a role model who did more such works in past on humanitarian ground. 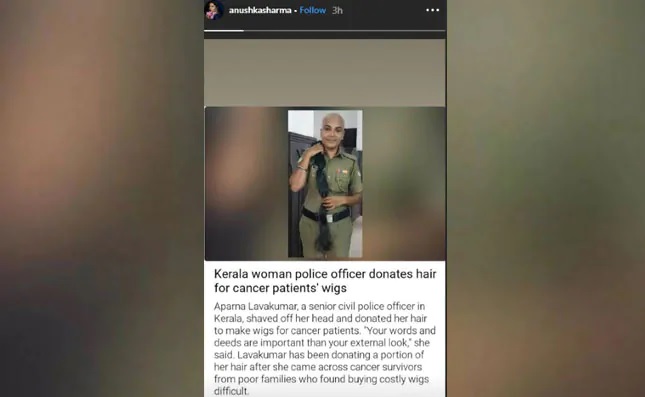 "Children suffering from cancer lose their hair and face psychological distress, I did this in order to help them. I have done it earlier too," ANI quoted the awe-inspiring lady as saying. Lavakumr added, tonsuring her head also gave her an opportunity to share their pain.

Kerala: Aparna, a policewomen in Irinjalakuda, Thrissur shaved her head to donate hair for cancer patients’ wigs. She says, "Children suffering from cancer lose their hair and face psychological distress, I did this in order to help them. I have done it earlier too" (28.09.19) pic.twitter.com/8T1hmJdzkl

Not only her gorgeous locks, but she also sacrificed her three gold bangles to stand beside a family which was struggling to pay a bill of Rs 60,000 to release the body of their kin from a hospital.

Aparna, for whom life is another name of giving and sharing, brought up her two girl children on her own after losing her husband at a young age. While the elder daughter is a post-graduate, the second one is a class 10 student.