Let us remind you of the best moments of the internet via top ten viral videos of the year. 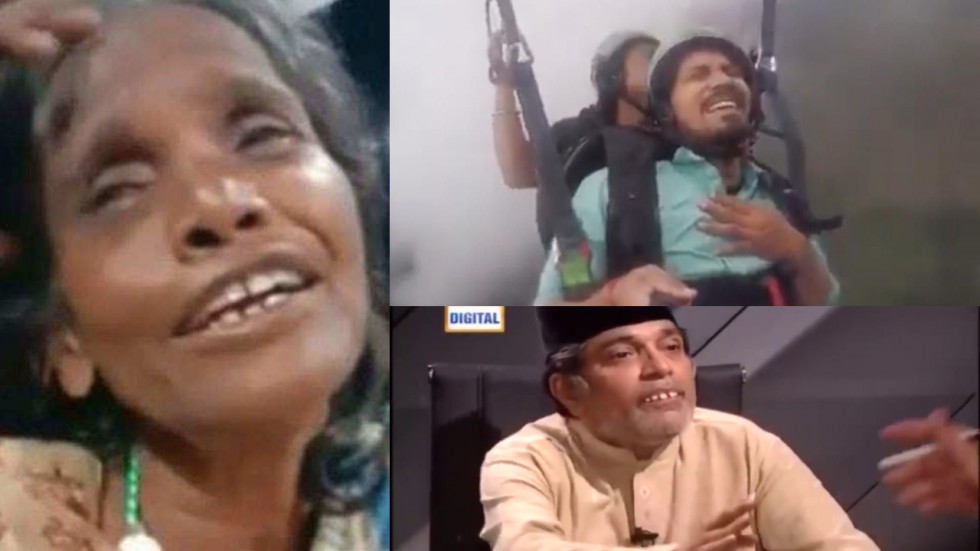 A look at the top ten viral videos of the year 2019 (Photo Credit : Composite Image )

'Tis the Season! It is the time to look back at the year that was 2019. This year saw many propelled to internet fame via viral videos. These videos made us laught, cry and even cringe. As we get ready to say goodbye to 2019, let us remind you of the best moments of internet via the top ten viral videos of the year.

Ranu Mondal became the viral sensation of 2019. Mondal was making a living by singing at Ranaghat station in West Bengal before she became an internet sensation in August 2019. A video of her singing 'Ek Pyar Ka Nagma Hai' went viral on social media. The video and subsequent story captured the entire nation's attention and imagination. Mondal got the chance to sing with Himesh Reshammiya with the video of their song also acquiring viral status.

Vipin Sahu was looking to have the time of his life when he went para-gliding in Manali. However, little did he know that the video of his para-gliding experience will make him a viral sensation. His scared expressions, cursing and repeated pleas of 'land kara de Bhai (just make me land)' left viewers in splits. It went on to inspire hundreds of GIFs and memes. While the original NSFW video amassed more than 8 million views, here's one which is safe for work.

This is one video we all can sympathize with. A young Gujarati girl went viral for expressing her frustrations about studying and demanding "chutkara (freedom)" from her school. The video was, shared by police officer Arun Bothra on Twitter, soon made everyone go 'LOL' on several social media platforms.

In the video, the girl complains how she has to wake up early, get ready and go to school every day. When asked what would she do if she meets the person who started schools, she says, "Main usse dhoke na, puri paani dal ke, istri kar dalungi puri! (I'll wash that person, drench him/her in water, and iron 'em out!)". She then goes on to even complain about PM Narendra Modi and how he needs to be defeated.

2019 saw many elections in the country and some memorable election campaign speeches. However, BJP leader Vineet Agarwal Sharda went viral for over-enthusiastic call for votes. While urging people to support BJP during the run-up to the 2019 Lok Sabha elections, Sharda went overboard saying 'Kamal' several times. He said, "Aapko sochna hoga ki Kamal chahiye ya kya chahiye, (You will have to think whether you want Lotus or something else) and went on to say 'Kamal, Kamal, Kamal, Kamal, Kamal, Kamal,' multiple times.

There are several videos on social media telling you how to look good and improve your look. In 2019, however, a video of a young boy explaining how to look attractive in college caught the internet's attention. The video became so popular that even seasoned YouTubers like Carry Minati reacted to it. The video shows a boy explaining how a "mature bag" can help one look more "attractive". The video became viral and catapulted the boy to internet fame as 'Mature Bag Wala Ladka'.

While massive protests took place in Lebanon, a video emerged that won the internet's heart. In the heartwarming video, protesters on the streets of Lebanon were seen singing 'Baby Shark' to a boy who was stuck in the traffic due to protests. According to reports,  Eliane Jabbour was driving with her 15-month-old-son, Robin Hadad in Baabda District, south of Beirut when her car was surrounded by a group of protesters. Jabbour told them not to be loud as she had a baby on board. The protesters then broke out in the famous toddler song, 'Baby Shark.'

It's Just A Banana

An art installation featuring a banana taped to a wall with duct tape and was sold for $120,000 (over Rs 85 lakh). While many found the artwork absurd and the price tag even more absurd, it was actions of one man that went viral. David Datuna, a Georgian-born American artist, walked into the gallery, pulled the banana off the wall and ate it in full public view.

The installation by artist Maurizio Cattelan titled ‘Comedian’ was on display at Miami’s Art Basel. The video of the incident went viral. Datuna termed the eating of the banana as a performance artwork titled ‘Hungry artist’.

Tesla and its founder Elon Musk are constantly in news- however, not always for the best of reasons. A video of Tesla's Cybertruck launch went viral this year. Elon Musk, the CEO of Tesla Inc, unveiled the company’s new truck called Cybertruck at a grand event in Los Angeles, California. He invited people to test out the truck's armoured glass windows. However, it did not go to plan as two of the truck's armoured glass windows cracked during a demonstration.

YOO Elon Musk was talking about how durable the new Tesla truck is and they decided to do a test pic.twitter.com/TjYJXsJfqE

In another heartwarming video that made the internet go 'awwwwwww' this year, a couple's attempt to gift their toddler the "worst Christmas gift ever" backfired in the most beautiful way. Twitter user and vlogger, LGND shared a snippet of the video where they surprised little Aria with a present ahead of Christmas. When the two-year-old girl realises it was a banana, she is overjoyed, screaming "Bananaaaa!!!"

I Tried Giving My Daughter The Worst Xmas Gift Ever & I Didn’t Expect This Reaction  pic.twitter.com/44cJytI83m