Scientists at NASA have detected water vapour for the first time above the surface of Europa, a finding that supports the idea of a liquid water ocean sloshing beneath the miles-thick ice shell of the Jupiter’s moon. 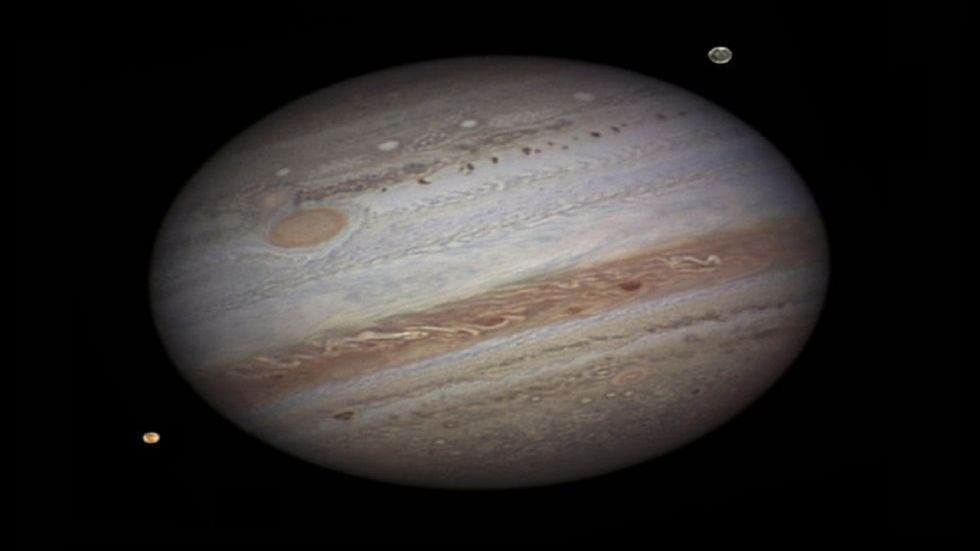 Scientists at NASA have detected water vapour for the first time above the surface of Europa, a finding that supports the idea of a liquid water ocean sloshing beneath the miles-thick ice shell of the Jupiter’s moon.

The study, published in the journal Nature Astronomy, measured the vapour by peering at Europa through W. M. Keck Observatory in Hawaii, US.

Missions to the outer solar system have amassed enough information about Europa to make it a high-priority target of investigation in NASA’s search for life. What makes this moon so alluring is the possibility that it may possess all of the ingredients necessary for life, said researchers from NASA’s Goddard Space Flight Center in the US.

Scientists have evidence that one of these ingredients, liquid water, is present under the icy surface and may sometimes erupt into space in huge geysers.

However, no one has been able to confirm the presence of water in these plumes by directly measuring the water molecule itself, NASA said in a statement. Confirming that water vapour is present above Europa helps scientists better understand the inner workings of the moon, the US space agency said.

For example, it helps support an idea—of which scientists are confident—that there’s a liquid water ocean, possibly twice as big as Earth’s, sloshing beneath this moon’s miles-thick ice shell, NASA said. Another source of water for the plumes, some scientists suspect, could be shallow reservoirs of melted water-ice not far below Europa’s surface.

It’s also possible that Jupiter’s strong radiation field is stripping water particles from Europa’s ice shell, though the recent investigation argued against this mechanism as the source of the observed water.

“Essential chemical elements (carbon, hydrogen, oxygen, nitrogen, phosphorus, and sulphur) and sources of energy, two of three requirements for life, are found all over the solar system. But the third—liquid water—is somewhat hard to find beyond Earth,” said Lucas Paganini, a NASA planetary scientist who led the water detection investigation.

“While scientists have not yet detected liquid water directly, we’ve found the next best thing: water in vapour form,” Paganin said. The researchers said that they detected enough water releasing from Europa (2,360 kilogrammes per second) to fill an Olympic-size swimming pool within minutes.

The scientists also found that the water appears infrequently, at least in amounts large enough to detect from Earth. “For me, the interesting thing about this work is not only the first direct detection of water above Europa, but also the lack thereof within the limits of our detection method,” said Paganini.

The team detected the faint yet distinct signal of water vapour just once throughout 17 nights of observations between 2016 and 2017. Looking at the moon from Keck Observatory, the scientists saw water molecules at Europa’s leading