Vikram Lander was sent with just 14 days of battery life. The lander needs more power in order to contact either the orbiter or any Earth station directly.

Chandrayaan-2 was the most complex mission ever attempted by the India's space agency. (File Photo)

Chandryaan-2’s Vikram Lander, lying on the surface of Moon after the hard-landing on September 7, may never be able to contact Earth. Ever. In all likelihood, the Vikram Lander is lost, forever. Though, there has been no official announcement by the ISRO so far, experts say that the -180 degrees C lunar night that began between Friday and Saturday according to Earth hours will leave the lander useless. It is because, the equipment fitted in lander is not meant to withstand such frigid temperatures. Nights on Moon are equivalent to 14 Earth days. Vikram Lander was sent with just 14 days of battery life. The lander needs more power in order to contact either the orbiter or any Earth station directly.

Previously, even National Aeronautics and Space Administration or NASA's Lunar Reconnaissance Orbiter (LRO)  also failed to capture Indian Moon mission Chandrayaan-2's Vikram Lander due to 'long shadows' over the landing site. The cameras of NASA's Lunar Reconnaissance Orbiter sent back the pictures of Chandrayaan-2's intended Moon landing site but could not spot the Vikram lander.

On September 7, ISRO’s ambitions to touch down the south pole of the Moon faced a snag after the space agency lost contact from Chnadrayaan-2's Vikram lander moments before landing on lunar surface. As soon as the fine braking phase started, the Vikram lander suddenly deviated from its path and stopped sending data back to the ground control.

Launched on July 22, Chandrayaan-2 entered the Moon's orbit on 20 August, a month after take-off. The touchdown of Vikram lander was scheduled between 1:30 am and 2:30 am, followed by the rollout of its rover named ‘Pragyaan’ between 5:30 am and 6.30 am on September 7.

Chandrayaan-2 was the most complex mission ever attempted by the India's space agency. Had the landing gone as planned, India would have become the first country to the land a mission on the south pole of the Moon and fourth after US, Russia and China to touchdown the lunar surface.

The NASA's Jet Propulsion Laboratory was also helping ISRO in connecting with Vikram as per the prior contract between two space agencies. “DSN 24 beams 12KW of RF at the #Moon in hopes of stimulating #Chandrayaan2's lander #VikramLander into communicating with home. Here's a eerie recording of the searcher's signal reflected off the Moon and back to Earth via EME (Earth Moon Earth) on 2103.7MHz,” tweeted astronomer Scott Tilley conforming the news. “#DSN 24 at Goldstone starts early just after local Moonrise signally for #VikramLander,” Tilley tweeted on Thursday. The NASA has three deep space networks located in South California’s Goldstone, Spain’s Madrid, Australia’s Canberra. 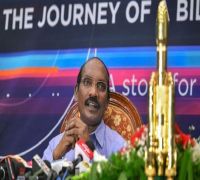 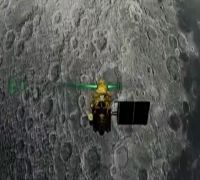 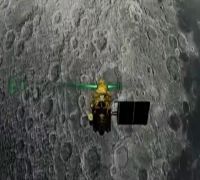