England will be favorites to finally break their ICC Cricket World Cup jinx ahead of the final against New Zealand in Lord’s, with recent ICC clashes suggesting Eoin Morgan’s side have a big edge.

England will be determined to erase years of pain in ICC event finals when they take on New Zealand in the World Cup final on Sunday. (Image credit: Getty Images)
HIGHLIGHTS

England and New Zealand will be gunning for glory in the ICC Cricket World Cup 2019 final at Lord’s on July 14. Eoin Morgan’s side has been on the receiving end of three losses in the ICC Cricket World Cup in 1979, 1987 and 1992. New Zealand has also tasted heartbreak in the final, having lost in the 2015 World Cup to Australia. Apart from World Cups, England has also tasted defeat in the 2013 Champions Trophy final to India as well as the 2016 World T20 in which they lost to West Indies at the Eden Gardens thanks to four consecutive sixes by Carlos Brathwaite. New Zealand has also lost in the 2009 ICC Champions Trophy to Australia.

With so much hurt and pain in previous ICC events, New Zealand and England will be determined to etch their name in glory on Sunday. England has been deemed the favourites as the tournament is being played in their conditions. They started off in fine form in the tournament before losing to Sri Lanka and Australia in the league stages. However, they bounced back against India and defeated New Zealand in the league game before decimating Australia in the semi-final. New Zealand, on the other hand, were undefeated in five out of six games but lost three consecutive matches before beating India in the semi-final.

However, England is also favourites heading into the clash against New Zealand due to their recent record in ICC events. Following their humiliating eight-wicket loss in the 2015 league game at Wellington thanks to Tim Southee’s 7/33, England has the edge over New Zealand in ICC events, be it the World T20 or the Champions Trophy.

Following the 2015 World Cup, England and New Zealand squared off in the 2016 World T20 semi-final. In the clash at the Feroz Shah Kotla, England chose to bowl and they were restricted to 153/8 thanks to Ben Stokes’ 3/26. In response, Jason Roy blasted 78 and Jos Buttler’s 32 off 20 balls gave England a thumping seven-wicket win.

After the World T20, New Zealand and England squared off in the 2017 Champions Trophy in Cardiff. This was a repeat of their 2013 encounter in the Champions Trophy which England won by 10 runs. Fifties from Alex Hales, Joe Root and Jos Buttler helped England reach 310 after batting first. In response, Liam Plunkett took 4/55 and Jake Ball finished with figures of 2/31 as Kane Williamson’s knock of 87 went in vain and New Zealand lost by 87 runs.

In the league game clash between the two sides in Durham, Jonny Bairstow blasted 106 and a superb spell of 3/34 from Mark Wood helped England thrash New Zealand by 119 runs. With three consecutive wins and with series wins of 3-2 in 2015 and 2018, England holds the edge over New Zealand heading into the clash at Lord’s and will be determined to erase years of pain. 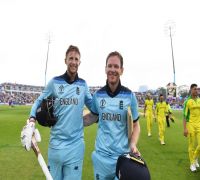 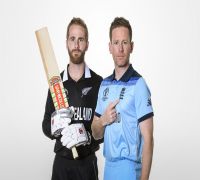 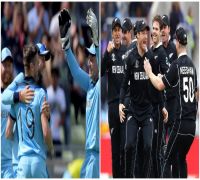