Jason Roy’s 85 was powering England towards victory but a controversial decision by umpire Kumar Dharmasena became the major talking point during the semi-final clash against Australia in Birmingham.

Jason Roy was given out in controversial circumstances for 85 as England cruised against Australia in the ICC Cricket World Cup semi-final in Edgbaston. (Image credit: Getty Images)
HIGHLIGHTS

Jason Roy and Jonny Bairstow had given England a flying start in their chase of 224 against Australia in the second semi-final of the ICC Cricket World Cup 2019 clash in Edgbaston. After Australia was restricted to 223, Roy and Bairstow blazed away in a rapid century partnership. Both batsmen regularly found the boundary and Roy showed his class by smashing his 18th fifty. In one over bowled by Steve Smith, Roy blasted a hat-trick of sixes as 21 runs came off the over. With both batsmen tearing the Australian bowling apart, it looked like the hosts were on their way of inflicting a humiliating defeat on the five-time champions. Australia found some redemption when Mitchell Starc trapped Bairstow LBW for 34 and the decision could not be overturned even on review.

The wicket by Starc took his tally of wickets to 27, the most by any bowler in one edition of the World Cup and it broke Glenn McGrath’s tally of 26 during the 2007 World Cup. Roy continued on his merry ways but there was a massive moment of controversy during the 20th over bowled by Pat Cummins. The bowler bowled a short ball down the leg side and Roy went for the pull, he missed and Alex Carey dived to his left and appealed for a catch. Umpire Kumar Dharmasena was initially hesitant to raise the finger but he did and that resulted in a shocking reaction from Roy.

Roy was flabbergasted and he decided to hang on, furious and muttering to himself. He clearly said that why it is not wide. Umpire Marais Erasmus from square leg urged Roy to go as England had lost the review. The confusion was compounded when umpire Dharmasena gave an indication to the third umpire of a review when he had given him out. However, England had no reviews and it only increased his anger. Roy walked off for 85 and there were massive boos heard around the stadium.

England has not beaten Australia for 27 years in the World Cup but they are on course to break the jinx and seal their spot in the ICC Cricket World Cup final against New Zealand at Lord’s on July 14. 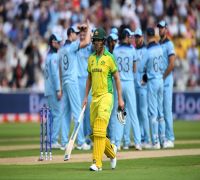 Australia vs England Semifinal: England beat Australia by 8 wickets, through to final 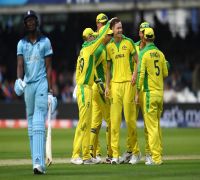 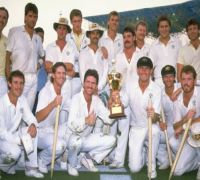