Rohit Sharma has created history by becoming the first player in history to score five centuries in one edition while Virat Kohli has scored five consecutive fifty-plus scores in ICC Cricket World Cup 2019.

Rohit Sharma has created history in the ICC Cricket World Cup 2019, with the right-hander becoming the first player in history to score five centuries in a single edition of the World Cup and in the process breaking Kumar Sangakkara’s tally of four consecutive tons in the 2015 World Cup. Rohit’s consistency has seen him become only the fourth person after Sachin Tendulkar, Mathew Hayden and Shakib Al Hasan to smash 600 runs in a single edition, with Rohit only 27 behind Tendulkar’s record tally of 673 which he achieved in the 2003 World Cup. At the other hand, Virat Kohli is a supreme run-making machine who has smashed five consecutive fifty-plus scores but not converted one into a century.

The interaction between two of the greatest batsmen in the modern era is fascinating and the official Twitter handle of the BCCI has carried a video of their interaction. In this video, Kohli is interviewing Rohit and has asked him the secret behind his consistency, saying he has never seen anything like it before. “It is, as we all know, is an important tournament for us. We had some really good form coming into the tournament. As a batting unit and a top-order batsman, I would not say it was my job, it was just that I wanted to carry on the form which I had it in the past and then come into a tournament like World Cup and try and see what we can do. And the first game when we started off well against South Africa it was really good. And then I had that confidence that we can continue to do that,” Rohit said.

MUST WATCH: @imVkohli & @ImRo45 in conversation - Does it get any better than this? 😎😎 You cannot miss this one - by @RajalArora

Nothing can beat this, when your loved ones are up there in the stands rooting for you with fingers crossed 🤞 pic.twitter.com/xPZSvlDba5

Earlier, Rohit uploaded a very emotional post on his Twitter handle in which he thanked his wife Ritika Sajdeh and young daughter Samaira’s presence in the ICC Cricket World Cup 2019 for his current run of good form. He wrote, “Nothing can beat this, when your loved ones are up there in the stands rooting for you with fingers crossed.”

India will be determined to repeat their World Cup glory of 1983 and 2011 as they prepare to face New Zealand in the semi-final in Old Trafford. 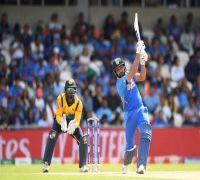 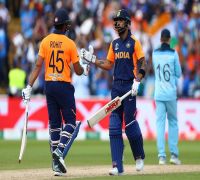