India will square off against New Zealand in the first semi-final on July 9 in Manchester and it will the first encounter between Virat Kohli and Kane Williamson in a knock-out clash since the 2008 Under-19 World Cup.

Virat Kohli and Kane Williamson were stars in the Under-19 World Cup in 2008 and both are currently considered as modern-day greats. (Image credit: Twitter)
HIGHLIGHTS

After 45 matches, the league stages of the ICC Cricket World Cup 2019 has ended. India, Australia, England and New Zealand are the four semi-finalists. India will take on New Zealand in Manchester on July 9 while Australia will once again square off against England on July 11 in Edgbaston. The road to the semi-final for both India and New Zealand has been a study of contrasting fortunes. New Zealand started the tournament with a bang with four wins out of five but suffered three consecutive defeats to lose momentum before the knockouts. India, on the other hand, has been clinical with both bat and ball and have suffered just one loss in the tournament which was to England.

Heading into the semi-final, Virat Kohli’s Indian cricket team are favourites to beat Kane Williamson’s New Zealand team. India’s batting and bowling have depth and form while the Kiwis have suffered in their batting which is overly reliant on Kane Williamson and Ross Taylor. This will be the first time India and New Zealand are squaring off in the semi-final of a 50-over World Cup and it will be a tough contest.

However, the match will also see Kohli and Williamson square off in a knock-out for the first time since the two clashed in the 2008 Under-19 World Cup encounter in Malaysia. 11 years ago, Kohli and Williamson were big names in the junior circuit and it was a tense clash at the Kinrara Academy Oval in Kuala Lumpur. New Zealand elected to bat and they looked in good touch.

After losing George Worker and Michael Guptill-Bunce cheaply, Williamson, in what would later become his trademark style, helped New Zealand stage a recovery. However, that was when Kohli decided to strike, not with the bat but with the ball. Kohli darted a quick ball wide outside off and Williamson was stumped for 37 by Shreevats Goswami. Kohli took his second wicket of Fraser Colson and had figures of 7-1-27-2. Corey Anderson blasted 70 off 76 balls which included six fours and four sixes and New Zealand ended on 205/8.

During the India innings, rain intervened and the target for India was 191 in 43 overs. This time, it was Williamson’s turn to inflict damage on Kohli. Goswami and the Indian skipper had strung a solid 84-run stand, with Goswami hammering a fifty and Kohli looking good on 43. However, Kohli drove a full ball from Worker to short cover where Williamson took a brilliant catch to his right and New Zealand was in the hunt again. Tim Southee took four wickets but India held their nerve to win by three wickets and enter the final. Kohli’s men would script history by winning the 2008 Under-19 title by beating South Africa in a rain-affected match.

11 years later, Kohli and Williamson are the modern-day greats of the game and are part of the fab-four in batting, along with Steve Smith and Joe Root. Both nations have a good record in the World Cup and they will be determined to enhance it in the semi-final. Will Williamson get the better of Kohli or will the Indian skipper inflict pain on the Kiwis as he did in 2008? The answer will be known on July 9. 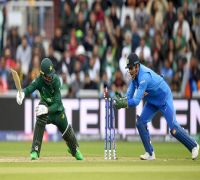 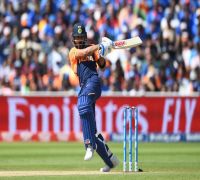 There is huge gap between Kohli and rest of world: Brian Lara 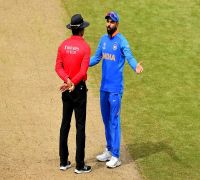 Virat Kohli argues with umpires over controversial DRS, this time vs Bangladesh in 2019 World Cup