The 11th round of the Tata Steel Chess tournament in Lieden saw plenty of action and plenty of movement in the points table. Anish Giri of Holland joined Magnus Carlsen on top while Viswanathan Anand maintained his fifth position. However, there was a major surge for another Indian Grandmaster Vidit Gujrathi as he defeated Shakhriyar Mamedyarov to move to six points and stay 1.5 point adrift of the lead. Gujrathi’s win over Mamedyarov was his second big scalp in the tournament, having won his previous encounter against former world champion Vladimir Kramnik. With just two rounds to go, Anand has an outside chance of winning the title while Gujrathi will be hoping to create an impression.

The win for Giri over Samuel Shankland who now joins Carlsen on top of the table, came in 45 moves but it came in bizarre circumstances after Shankland resigned from a position which was deemed as a draw by many experts. “It is quite funny because the only way to lose is to resign, because if he wouldn't have resigned I wouldn't have been able to break through,” Giri remarked in an interview after the match was over. In another game, Anand was held to a draw by Polish Grandmaster Duda in just 31 moves as he moved to 6.5 points, one point behind Carlsen and Giri. 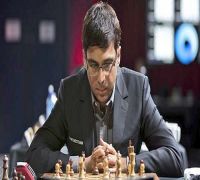 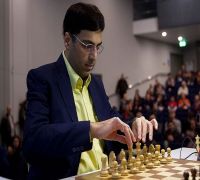 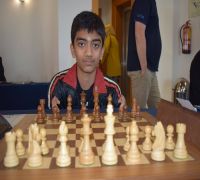 However, the third contender who has moved into the fray is Russian Grandmaster Ian Nepomniachtchi who defeated Vladimir Fedoseev in 50 moves to move to seven points, just half a point behind Giri and Carlsen. For Gujrathi, his win over Mamedyarov comes at a time when he had struggled against the Azerbaijan Grandmaster in previous encounters. After the match, Gujrathi said he was helped in some positional tactics before the game by some Skype friends, including Grandmaster Peter Svidler.

With just two rounds remaining, Anand is one point behind Giri and Carlsen and will next play China’s Ding Liren and Gujrathi in the remaining rounds. Anand has to win both his games and hope Carlsen and Giri lose their next game and that the final game, which will be between Carlsen and the Dutch Grandmaster, ends in a draw. Anand will also be hoping that Nepomniachtchi does not win any of his games against Shankland or Teimour Radjabov.