South Africa registered a win in the final over against England in the ICC Women's World T20 clash at the WACA in Perth. (Photo Credit: Getty Images)

South Africa had done all the hard work in restricting England to 123/8 with Ayabonga Khaka taking three wickets and with good support from Marizanne Kapp (2/19) and Dane van Niekerk (2/20). England fought all the way and the equation boiled down to seven runs off four balls. Mignon du Preez, playing in her 100th Twenty20 International, then smoked a six off Katherine Brunt and finished the match with a boundary as South Africa broke years of heartbreak to finally win against England in the ICC Women's World T20 for the first time in a tense encounter at the WACA in Perth.

South Africa chose to bowl in their opening game in the ICC Women's World T20 but Amy Jones signalled England's intentions early witn two boundaries in the first over bowled by Nonkululeko Mlaba. Jones continued to find the boundary but her aggressive innings ended when Marizanne Kapp mishit the shot to mid-off. Ayabonga Khaka then struck as Danielle Wyatt hit a low full toss to point. Natalie Sciver held the key but England kept losing wickets with Dane van Niekerk getting rid of Heather Knight cheaply.

Sciver and Fran Wilson stitched a solid stand and things looked good for England. However, van Niekerk got rid of Wilson for 14 but Sciver smashed a four and a six off Mlaba and neared her fifty with a four off Khaka. Shabnim Ismail sent back Katherine Brunt but Sciver reached her fifty with a four. However, Khaka delivered a big blow when Sciver was undone by the change of pace. Tammy Beaumont smashed a four in the final over bowled by Kapp as England ended on 123/8. 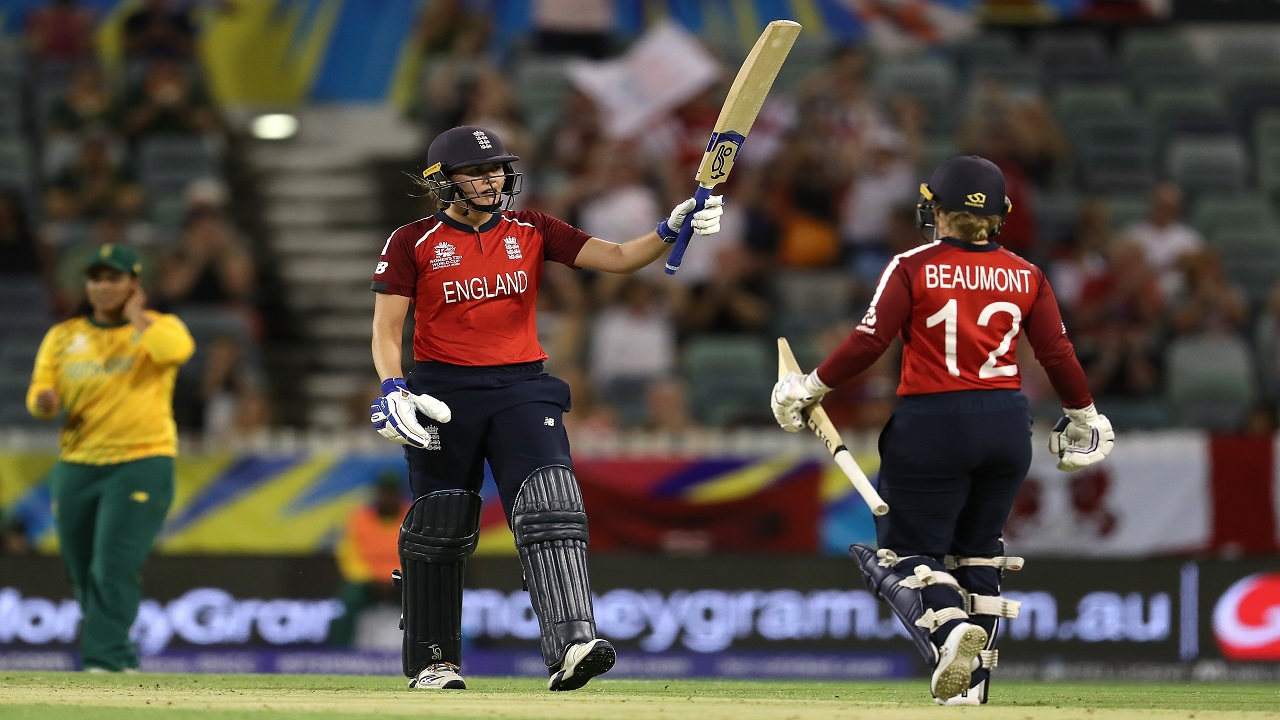 England staged a fightback as Sarah Glenn sent back Kapp for 38 and Ecclestone dismissed van Niekerk for 46. Chloe Tyron hit a streaky boundary but South Africa needed 19 of 12 balls. England wasted a review as Tyron smashed a six off Ecclestone to get the equation down comfortably but on the final ball, she missed a slog across the line and was bowled. With nine runs needed off the last over, South Africa were in danger of going into the 'choke' zone. There was a moment in the final over that could have tilted the balance of the game. Katherine Brunt came on to bowl the third ball of the final over.

However, she stopped and gave a warning to Sune Luus as she was backing up too far. According to the new Mankading rule, a bowler is not obliged to warn the batter for backing up too far but Brunt chose not to Mankad Luus as a new debate came up on the Spirit Of Cricket. Du Preez smashed a six and a four to ensure South Africa won for the first time against England and that too on du Preez's 100th T20I.

Speaking after scoring the winning runs, du Preez said this win was the first step in something special. "I had it in me and to do it today was truly special. This was an opportunity for me to step being a senior player. I have been part of seven world cups and we have never come this close (against England). We spoke about doing something really special this time around and I think this is the start of something really special. We want to take the trophy home," du Preez said.