KL Rahul And Shikhar Dhawan Slammed Fifties And A Disciplined Bowling Performance From The Indian Bowlers Helped Virat Kohli's Side Win The Pune Twenty20 International By 78 Runs To Clinch The Series 2-0.

Shikhar Dhawan notched up his 10th fifty but it was his first half-century after nearly 15 innings. (Photo Credit: BCCI Twitter)

Shikhar Dhawan roared back to form with his 10th fifty, but his first in 15 innings. KL Rahul continued his purple patch with his ninth fifty. A blitz from Shardul Thakur and a solid knock from Manish Pandey helped India deflate Sri Lanka. Jasprit Bumrah, Thakur and Navdeep Saini broke the spine of the Sri Lanka batting and despite Dhananjaya de Silva's aggressive fifty, Sri Lanka fell short by 78 runs at the MCA stadium in Pune as India clinically ticked all the boxes to clinch the three-match series 2-0 on Friday. There was a hint of happiness at the very beginning for Virat Kohli when Lasith Malinga won the toss and inserted India in. Kohli admitted that India wanted to do something different. Many would have felt that his toss talk was similar to the Chennai ODI against West Indies when he wanted to bat first and the bowlers let him down. However, the confidence and tone was different.

There were big changes in both sides. Angelo Mathews got his first game after two years for Sri Lanka while India's bench strenght was finally tested with Sanju Samson and Manish Pandey replacing Rishabh Pant and Shivam Dube in the side. Yuzvendra Chahal replaced his spin twin Kuldeep Yadav.

KL Rahul started off in fine fashion with three boundaries in two overs while Dhawan looked to be aggressive against Malinga. The left-hander benefited from a dropped catch by Dasun Shanaka off Mathews. Both openers found the boundary on a regular basis with Dhawan getting the better of Malinga with two boundaries in the fifth over. India ended the powerplay in grand style when Dhawan hit two boundaries off Lahiru Kumara.

Dhawan neared his fifty with a slog swept six off Wanindu Hasaranga and the jubilation was evident on his face as questions were raised about his ability in the top order in Twenty20s. However, Lakshan Sandakan struck when Dhawan slog swept a flighted ball but holed out to deep midwicket. Sanju Samson, who had hit a 100 in an IPL game in Pune, ended five years of wait with a huge six off Sandakan but was undone by a googly from Hasaranga as his comeback ended in disappointment. Rahul blasted a flighted ball from Sandakan to reach his ninth fifty but just like Dhawan, he fell after reaching a milestone by getting stumped fo 54.

From that point, Sri Lanka enjoyed a purple patch as the bowler dismissed Shreyas Iyer for 4 after the batsman got off the mark with a boundary. Virat Kohli, batting at No.6 after a long time, smashed a six and a four off Angelo Mathews but in the quest of taking a non-existent second run, he was comfortably run out. Washington Sundar followed him back next ball with an upper-cut off Kumara that was taken at third man. Thakur signalled his intentions with a lofted six off Malinga over long on and he showed his class with a boundary and six off Kumara in the final over as India reached 201/6. Manish Pandey, at the other end, held his nerve and showed his mettle as India ended on a good note.

In response, Sri Lanka could not handle the pace of the Indian bowlers. Jasprit Bumrah struck in his first over by removing Danushka Gunathilaka while Thakur, after being hit for a six by Avishka Fernando, got his revenge the next ball when he sliced an outswinger to point. When Oshada Fernando was run-out and Navdeep Saini cleaned up Kusal Perera with a pacy yorker, the game was all but up. Dhananjaya de Silva and Angelo Mathews kept the fight going and they had a couple of good overs. 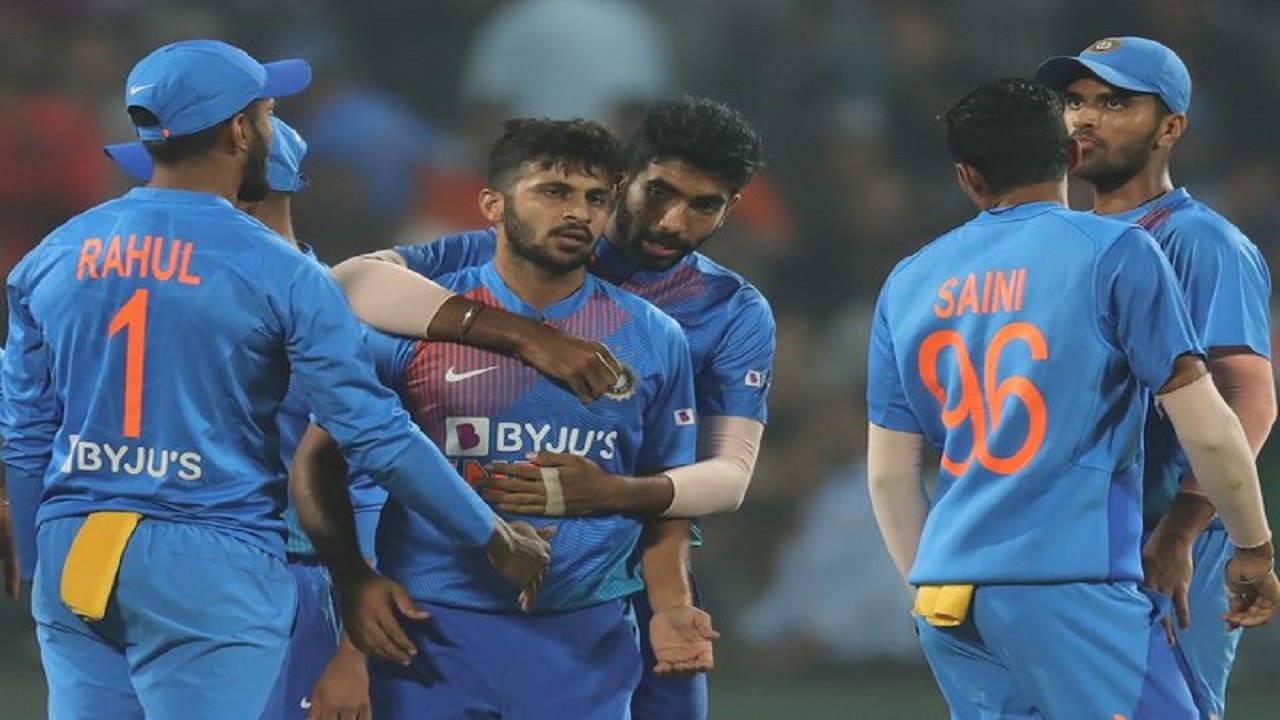 Mathews blasted two sixes off Sundar and de Silva smashed Yuzvendra Chahal for a six and responded with two fours off Saini. Mathews blasted a flat six off Sundar but the 68-run stand ended when Mathews mistimed a lofted shot to long on and Pandey took a tumbling catch. With Mathews' dismissal, it was only a matter of time. De Silva hit his second fifty and Dasun Shanaka, after hitting a six off Chahal, was caught and bowled by Thakur. When Hasaranga was run-out thanks to a direct hit from Chahal off balanced at mid off, India wrapped things up quickly.

Sundar had Sandakan stumped and Saini ended de Silva's vigil when he upper-cut a short ball to third man to fall for 57. The end happened next ball when Malinga holed out to a short ball to be caught at mid off. The victory margin summed up India's dominance in what continues to be their ideal build-up to the World T20.