IND VS WI Hyderabad T20I Live Cricket Score: Get all the live updates from the Rajiv Gandhi International Cricket Stadium in Hyderabad. 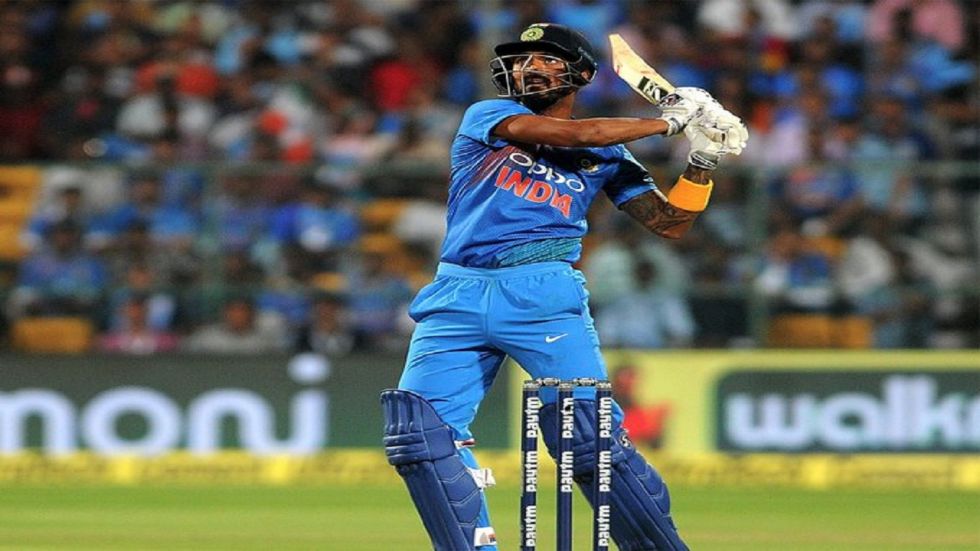 KL Rahul hit his 7th fifty and Virat Kohli smashed his 23rd half century as India won by six wickets in their chase of 207 against West Indies. (Photo Credit : PTI )

11 Twenty20 Internationals. This is the number of games that will remain for India before their World T20 clash against South Africa at the New Perth Stadium in OCtober 2020. After the three matches against the West Indies, they will play three more games against Sri Lanka before culminating in a massive five-match Twenty20 International series in New Zealand. These 11 games, in addition to the IPL that will be played till May, gives the Indian cricket team the opportunity to fine tune some of the loopholes in the side. For the West Indies, they will be desperate to snap their losing run against India, having lost six consecutive games ever since the World T20 clash in 2016.

22:30 hrs IST: Sealed with a six! Virat Kohli's brilliant 94* gives India a record-breaking win vs West Indies in Twenty20 Internationals.What a freak of a player.

22:13 hrs IST: WICKET! Some respite for the West Indies. Cottrell bowls a slow and short ball outside off, Pant miscues the lofted shot and holes out to long off. India need 30 off 22.

22:08 hrs IST: Kohli blasts a six and then sledges Kesrick Williams in style. He then gets thrashed by Rishabh Pant. The match is slipping away from the West Indies. India need 31 off 24 balls.

21:52 hrs IST: WICKET! Big wicket for West Indies. The partnership reaches 100 with a big six by Rahul which measures 101 meters. However, next ball, he holes out to long off as Pierre takes his second wicket. India are 130/2 in the 14th over.

21:49 hrs IST: Kesrick Williams continues to concede extras and KL Rahul notches up his seventh fifty. Kohli is also nearing his fifty. India are 123/1 after 13 overs, needing 85 off 42 balls.

21:41 hrs IST: Kohli blasts a six and a four off Jason Holder. The four he hit was off a waist-high full toss and Kohli is fuming at the square leg umpire, stating that it should have been a no-ball for height. However, replays show it is not. After 12 overs, India are 110/1, needing 98 off 48 balls.

21:35 hrs IST: Kohli gets an inside edge that just goes past the stumps as India make good progress. Rahul is nearing a fifty and India are 96/1 after 11 overs.

21:26 hrs IST: KL Rahul and Virat Kohli are making excellent progress. West Indies are not helping themselves with extras. After nine overs, India are 81/1.

21:16 hrs IST: SIX! by Lokesh Rahul on the last ball of the 5th over to Cottrell

21:04 hrs IST: WICKET! Massive moment for Windies. Kharry Pierre floats a flatter delivery on leg stump and Rohit thumps the ball to deep midwicket where Shimron Hetmyer takes the catch. India are 30/1 in the fourth over.

20:58 hrs IST: Three consecutive fours by KL Rahul off Jason Holder while Cottrell is getting good swing. Rohit steers the bowler for a boundary and the bouncer goes over Ramdin's head. India are 28/0 after three overs.

20:51 hrs IST: Good over from Sheldon Cottrell as he concedes just four runs in the first over. Good swing generated by Cottrell.

20:35 hrs IST: Holder blasts a six and West Indies have ended on 207/5 after 20 overs. Massive task ahead for Rohit Sharma, Virat Kohli.

20:23 hrs IST: WICKET! That is a massive wicket. Chahal bowls a quicker one and it zips through, Pollard goes for the slog down the ground but misses it and the ball hits leg stump. West Indies are 173/5 in the 18th over.

20:20 hrs IST: WICKET! Fourth time lucky for Rohit Sharma. Hetmyer thumps the sweep off Chahal to long leg where Rohit takes the catch. The ball is following Rohit everywhere in Uppal. West Indies are 172/4 in the 18th over.

20:18 hrs IST: Rohit Sharma saves two brilliant shots and prevents two sixes with some superb dives. However, he is not third time lucky as the catch at long on bursts through his fingers. Two sixes by Kieron Pollard and West Indies are 172/3 after 17 overs.

20:13 hrs IST: Missed catch! What was Washington Sundar doing there? Hetmyer top-edges the sweep but Sundar loses the ball in the lights and does not go for the catch. Hetmyer notches up his maiden fifty with a six down the ground and West Indies are 155/3 after 16 overs.

20:08 hrs IST: Superb over from Bhuvneshwar Kumar as he concedes just three runs in the over. West Indies are 144/3 after 15 overs.

20:03 hrs IST: Kieron Pollard blasts a six off Yuzvendra Chahal as West Indies continue to deal only in sixes. West Indies are 141/3 in 14 overs.

19:59 hrs IST: Brilliant from Hetmyer! He pounds a massive six off Jadeja to the deep square leg and then a misfield from Kohli at extra cover gives him a boundary. Hetmyer nears his fifty as West Indies reach 132/3 after 13 overs.

19:48 hrs IST: WICKET! Just when he was looking good. Brandon King dances down the track but Jadeja spots it and he fires a flat and wide delivery outside off, King misses the slog and is stumped by a long way. West Indies are 101/3 in the 11th over.

19:39 hrs IST: Missed chance! Brandon King pulls a short ball from Sundar to wide long on but Rahul dives forward and the ball lands in front. He thumps another boundary and West Indies are 82/2 in eight overs.

19:36 hrs IST: Only four runs conceded by Ravindra Jadeja in his first over. India would be hoping for some tight overs. After seven overs, West Indies are 70/2.

19:31 hrs IST: WICKET! Finally, something going India's way. Full and flat delivery from Washington Sundar on middle and off stump, it spins away as Lewis misses the sweep, the umpire raises the finger immeidately. Oh dear, Lewis should have reviewed that as the ball might have not been hitting off stump and there was questions on the impact. West Indies are 64/2 in 5.4 overs.

19:27 hrs IST: West Indies have gotten off to a fine start. Lewis is dealing primarily in boundaries. He blasts Bhuvneshwar for a six over deep point and then short-arm pulls a short ball to fine leg. West Indies are 57/1 after five overs.

19:22 hrs IST: Expensive over from Deepak Chahar. Evin Lewis blasts a six and a four and then Brandon King also responds with a pulled six to deep midwicket. West Indies are 46/1 after four overs. 19 runs in the over.

19:17 hrs IST: Bhuvneshwar Kumar comes into the attack as Virat Kohli continues to rotate his bowlers. Only six runs in the third over as West Indies reach 27/1 after three overs.

19:12 hrs IST: Brandon King gets going with a superb boundary over deep extra cover and West Indies are 21/1 after two overs.

19:07 hrs IST: WICKET! Deepak Chahar has started from where he left off in the series against Bangladesh. Full ball and moving away outside off stump, Simmons does not move his feet and he edges to Rohit Sharma at slip. West Indies are 13/1 after 1.2 overs.

19:04 hrs IST: Poor start for Washington Sundar as Evin Lewis thumps a four and six over long leg and deep backward square leg. West Indies are 13/0 after the first over.

18:39 hrs IST: Here are the playing XIs of both the sides

18:34 hrs IST: India have won the toss and will bowl against the West Indies. Bhuvneshwar Kumar is in the side. No Sanju Samson and Manish Pandey. Keemo Paul and Fabian Allen miss out.

18:18 hrs IST: From the looks of the pitch, it looks like the spinners might have a field day in Hyderabad. However, there is more good news for Hyderabad fans as a stand will be named after Mohammad Azharuddin.

17:54 hrs IST: For the West Indies, they have endured a nightmare against India for the last three years in this format. They have lost six consecutive T20Is against India while their last win came during the 2016 World T20 semi-final in Mumbai.

17:39 hrs IST: A warm welcome to the first match between India and West Indies from Hyderabad. This is the last Twenty20 International series of 2019 before we enter the year 2020, where the two World T20s will be played in Australia.