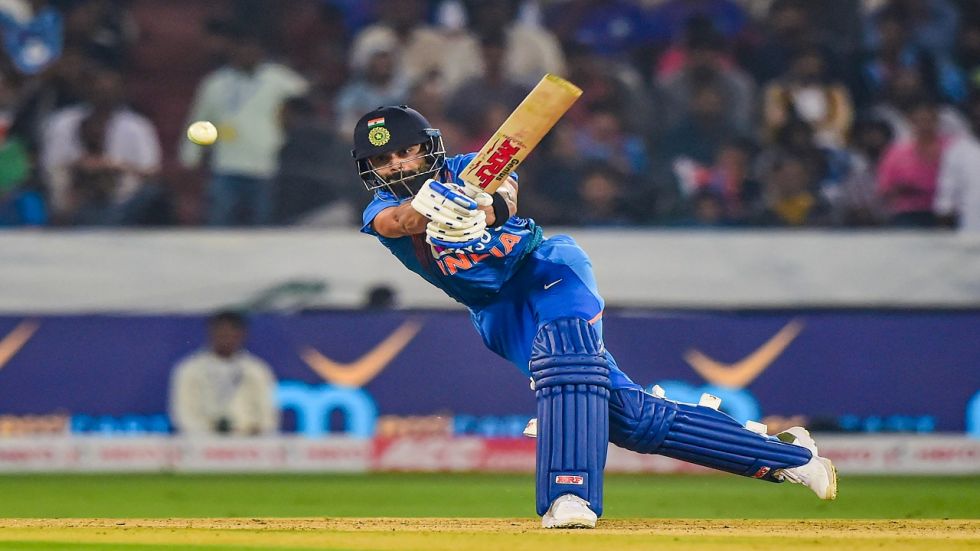 West Indies won the match by eight wickets against India in Thiruvananthapuram to level the three-match series 1-1. (Photo Credit : PTI )

How does one stop Virat Kohli? Even better, how does one stop Kohli from making anything in excess of fifty? Firstly, West Indies might do better to not make him angry. Kesrick Williams committed the mistake and he was repaid by his own karma by the notebook signature sledge. Rather than trying to put Kohli off his mark with some banter, it might be wiser for West Indies to bowl disciplined line and lengths to Kohli. Kieron Pollard, the West Indies skipper, did not mince words when he said that the batsmen executed their plans well but the bowlers let them down.

22:28 hrs IST: Simmons and Pooran end the game in style as West Indies win by eight wickets and snap their seven-game losing streak. Decider will be played in Mumbai on December 11.

22:20 hrs IST: Simmons murders the last ball over long off for a flat six and West Indies need 17 runs off 18 balls. What an effort this is from Simmons.

22:14 hrs IST: Simmons and Pooran are taking the attack to the Indian bowlers. Pooran slams two fours off Bhuvneshwar and Simmons ends the over in style as 15 runs are conceded. After 16 overs, West Indies are 142/2, needing 29 off 24 balls.

22:04 hrs IST: WICKET! After hitting two back-to-back sixes, Hetmyer thumps a flatter ball to long on but Kohli runs to his right and dives to take a stunning catch. He is just inside the ropes and ensures his leg and hands are not in contact. Brilliant stuff from Kohli. West Indies are 112/2 in the 14th over.

21:55 hrs IST: Shimron Hetmyer clobbers a six off Ravindra Jadeja as Windies make good progress. After 12 overs, they are 91/1.

21:51 hrs IST: Lendl Simmons thumps a boundary off Shivam Dube as the bowler oversteps and concedes a free-hit. West Indies are 83/1 after 11 overs.

21:44 hrs IST: WICKET! Finally, India have the breakthrough. Lewis falls in the 40s again. Flighted delivery and it spins away, Lewis eyes a big shot but misses and Pant effects an easy stumping. West Indies 73/1 in the 10th over.

21:40 hrs IST: Simmons benefits from a misfield from Ravindra Jadeja as he gets a boundary to deep backward point but he makes Yuzvendra Chahal pay with a six over deep midwicket. West Indies are 71/0 after nine overs.

21:36 hrs IST: Simmons pummells a six off Sundar but India lose the review as Lewis misses a pull and is hit on the back leg but the impact is outside off. West Indies are 59/0 after eight overs.

21:31 hrs IST: Lewis slog sweeps a six off Yuzvendra Chahal to long leg and the fifty-run opening stand is up. West Indies are 51/0 after seven overs.

21:26 hrs IST: Two big sixes by Evin Lewis off Washington Sundar. That should ease the pressure as West Indies end the powerplay in style, smashing 41/0 after six overs.

21:21 hrs IST: CATCH DROPPED! Unbelievable. Second dropped catch in three balls. The knuckle ball from Bhuvneshwar, Lewis makes room and cuts it but the edge flies to Pant who dives to his left. However, he fails to latch on and West Indies are 26/0 after five overs.

21:19 hrs IST: CATCH DROPPED! Repeat of Hyderabad here. Simmons skies a length ball from Bhuvneshwar Kumar high to mid off but Washington Sundar drops the catch. Cannot blame the floodlights in this case. West Indies are 24/0 in the fifth over.

21:17 hrs IST: Superb over from Washington Sundar as he concedes just one run. West Indies are 23/0 after four overs.

21:12 hrs IST: Two consecutive fours by Evin Lewis off Deepak Chahar. This is a positive start for them as they reach 22/0 after three overs.

21:07 hrs IST: Good over from Bhuvneshwar as he concedes just four runs in the second over. West Indies are 9/0 after two overs.

21:03 hrs IST: Evin Lewis gets a streaky boundary as Deepak Chahar starts well. West Indies are 5/0 after the first over.

20:47 hrs IST: West Indies fight in the death overs with some superb bowling as India end on 170/7 after 20 overs vs West Indies. Seems a decent total on a sluggish wicket. Windies need to bat better.

20:39 hrs IST: WICKET! Superb ball from Kesrick Williams. Full ball and bowled with a cross-seam, it grips the wicket and Jadeja looks for a slog but misses it and the off stump is detonated out of the ground. India are 164/6 after 19 overs. Can Pant get India to 180?

20:35 hrs IST: Sheldon Cottrell bowls a good over and India are 156/5 after 18 overs. West Indies are not helping themselves with too many wides.

20:26 hrs IST: WICKET! Hayden Walsh continues his impressive show. The googly and floated full outside off, Iyer toe-ends the lofted shot and is caught by Brandon King running back from mid off. India are 144/5 after 16.2 overs.

20:18 hrs IST: Superb over from Hayden Walsh Jr and Shreyas Iyer as well as Rishabh Pant are struggling for timing. India are 132/4 after 15 overs.

20:10 hrs IST: WICKET! Thiruvananthapuram has been silenced. Kesrick Williams gets Virat Kohli. He does not open the notebook but instead opts to put his finger on his mouth and be silent. Kohli dances down the track but Williams drags the length back and gets the ball to rise up, Kohli is cramped for room and he upper-cuts it to Lendl Simmons at third man. India are 120/4 in the 14th over.

20:05 hrs IST: Kohli hits a boundary off the last ball off Jason Holder as he continues to make good porress. India are 112/3 after 12 overs.

19:53 hrs IST: Maiden fifty for Shivam Dube! Brilliant stuff from the youngster after getting promoted up the batting. Just off 27 balls. India 93/2 after 10 overs.

19:45 hrs IST: Three sixes in the over from Dube and he absolutely takes Pollard to the cleaners. He is nearing a fifty as 26 runs come off the ninth over. India are 84/2 after nine overs.

19:38 hrs IST: WICKET! Poor shot from Rohit Sharma. He was just struggling out there. Full ball outside off, Rohit shuffles to the off side and looks to paddle scoop it to fine leg but he misses it and the ball hits the stumps. India are 56/2 after 7.4 overs. Dube looking positive with a four and a six.

19:35 hrs IST: Shivam Dube is struggling to make contact and Kieron Pollard concedes just three runs in his first over. India are 45/1 after seven overs.

19:31 hrs IST: Kesrick Williams gets off to a solid start this time. Concedes just five runs as both Rohit and Dube struggle for timing. After the end of the powerplay, India are 42/1 after six overs.

19:25 hrs IST: Shivam Dube gets a top edge and gets a boundary to third man while Rohit Sharma pulls Jason Holder to the long leg fence. India are 37/1 after five overs, Holder conceding nine runs in his first over.

19:17 hrs IST: WICKET! Rahul falls cheaply. Floated up on middle and leg stump line by Kharry Pierre, Rahul looks to muscle the slog sweep but toe-ends it and Shimron Hetmyer at deep midwicket takes the catch. However, Shivam Dube comes in place of Virat Kohli. India are 24/1 after 3.1 overs.

19:16 hrs IST: Much better over from Cottrell. Only five runs in the over and India are 24/0 after three overs.

19:10 hrs IST: Rahul also begins well as he cracks a boundary past cover point off Kharry Pierre and India are 19/0 after two overs.

19:06 hrs IST: Poor start for West Indies. Sheldon Cottrell gets swing but he drifts most of the balls down the leg side. Five wides and a boundary for Rohit Sharma and India are 12/0 in the first over.

18:58 hrs IST: Denesh Ramdin might not be playing today in Thiruvananthapuram, but he is already a hero for many cricket fans here due to THIS sweet gesture. Hats off!

18:38 hrs IST: India are unchanged while Nicholas Pooran, whose four-match ban ends after the ball-tampering scandal, is back in the side and he replaces Dinesh Ramdin. Here are the playing XIs of both the sides

18:33 hrs IST: West Indies have chosen to bowl against India in Thiruvananthapuram.

18:19 hrs IST: The pitch, according to the experts, is as flat as Hyderabad. The spinners will have a say. Nicholas Pooran is available for selection for the West Indies while India will be without Kuldeep Yadav. Will India make any changes? Will Sanju Samson get to play in front of his home fans? Toss in 10 minutes time.

18:11 hrs IST: The only match that has been played at the Greenfields International stadium was a rain-curtailed game against New Zealand in 2017. In an eight-over game, India held their nerve to win the match by six runs and clinch the series 2-1.

17:45 hrs IST: A warm welcome to the second and potentially series deciding Twenty20 International at Greenfields International Stadium in Thiruvanathapuram. Virat Kohli will be once again the force that West Indies will be aiming to stop but they face a uphill task.