February 13, 1980 Witnessed A Classic Clash Between West Indies And New Zealand In Carisbrook, Dunedin As New Zealand Stunned The Mighty Windies By One Wicket But The Game Would Be Remembered By Poor Behavior From The West Indies Over The Umpiring.

Michael Holding was incensed by the umpiring and he kicked the stumps in anger in what became an infamous photo during West Indies' tour of New Zealand in 1980. (Photo Credit: Twitter)

The West Indies cricket team of the late 70s and the 80s were a dominant force, on par with the Australian team of the 90s and the new millennium. They had world class batsmen, intimidating and daunting bowlers and they steamrolled oppositions wherever they went. In the 1979/80 tour to Australia, the West Indies dominated in the ODIs as they won the tri-series contest by beating England 2-0 in the best of three finals. In the three-Test series, West Indies drew the first Test in Brisbane while they registered a 10-wicket in Melbourne and the third Test in Adelaide by 408 runs. Clive Lloyd's team, thus, became the first West Indies team to win a series in Australia and it was a perfect revenge for their hammering in 1975 when they lost 5-1 to Australia.

With the high of Australia, West Indies headed to New Zealand, a side against which they had massive success. Armed with bowlers like Andy Roberts, Joel Garner, Michael Holding and Colin Croft as well as batsmen of the class like Lloyd, Sir Viv Richards, Gordon Greenidge, Desmond Haynes, Alvin Kallicharan and wicketkeeper Deryck Murray, the Windies juggernaut was all set to decimate New Zealand.

New Zealand had followed how West Indies' tactics of intimidation and bullying had blown their Trans-Tasman rivals away. Heading into the first Test at Carisbrook, Dunedin, aptly named the 'Theatre of Pain', New Zealand decided to usher in a bit of psychological warfare on the West Indies. During the Test match in Dunedin, the Public Annoucement played songs which made the West Indies team homesick, having been away from their country for close to four months.

In a report on stuff.co.nz, New Zealand keeper Warren Lees had said the climate in Carisbrook, apart from West Indies' general feeling that they were wasting their time playing the Kiwis over five days played into their hands. It did not help that Richards, their best batsmen, was out of the tour due to an injury. West Indies chose to bat and they were blown away for 140 with Sir Richard Hadlee taking 5/34. New Zealand managed to take a 109-run lead with Bruce Edgar smashing 65 and Hadlee chipping in with a vital 51 which included an eighth-wicket stand of 64 with Lance Cairns. 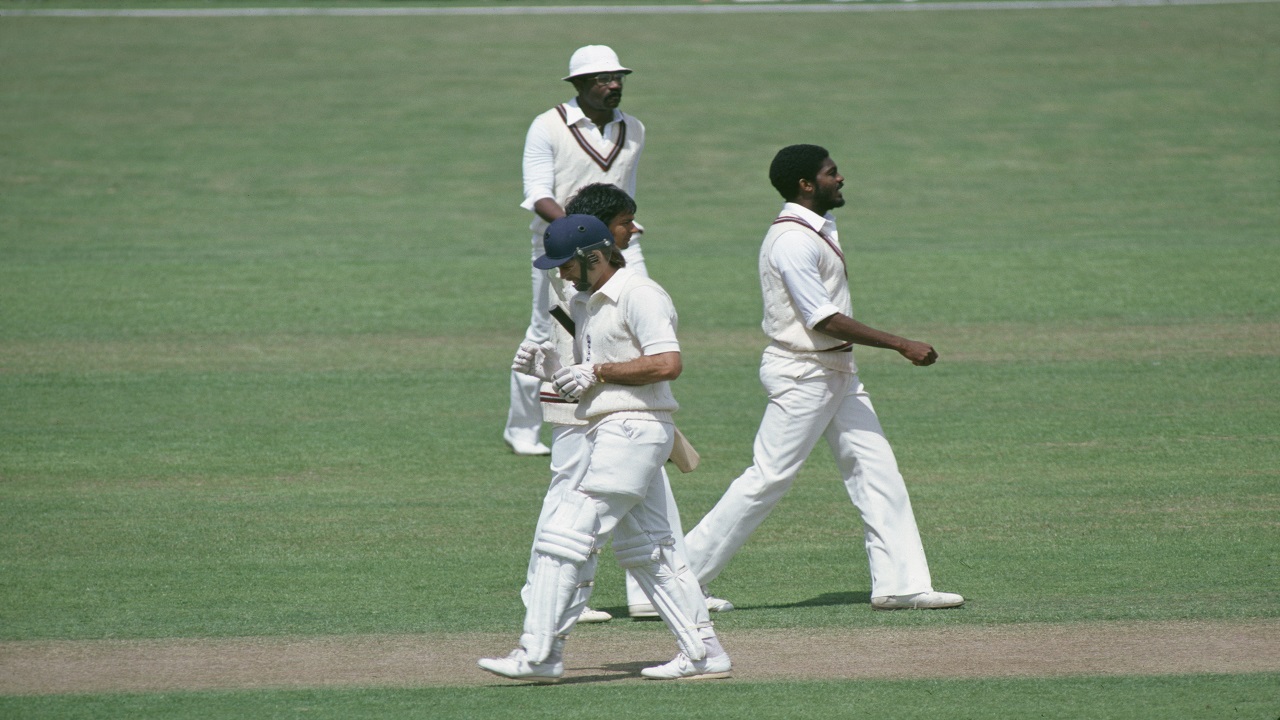 New Zealand defeated West Indies by one wicket in Dunedin and won the series 1-0 in 1980. (Image credit: Getty Images)

New Zealand reduced West Indies to 29/4 but Haynes held firm. In the backdrop, West Indies were incensed by the umpiring, especially of Fred Goodall and they made their displeasure obvious during the course of the game. Hadlee had seven LBWs which was a new Test record while the Test witnessed a total of 12 LBWs. On the rest day, New Zealand's radio stations 'accused' the Windies of being 'sore losers'. On the resumption of the rest day, Haynes shared a 88-run stand with Collis King and 63 runs with Murray as West Indies were right back on track. But, Hadlee took 6/68 and he followed the mantra of bowling straight and at the stumps. West Indies were 212 all out, giving New Zealand 104 for a win.

Garner, Holding and Croft decimated the New Zealand top-order and they were reeling at 73/8. However, during that moment, there was a moment which would go down infamously in sports. Earlier, Holding had clipped Lance Cairns' off stump without the bails being dislodged. A caught-behind appeal of John Parker was turned down by umpire John Hastie. The batsman non-chalantly removed his gloves and put them back on as he stood his ground. Holding was fuming and he kicked the stumps down at the striker's end.

Years later, he would regret the incident. Lance Cairns and Gary Troup stitched a 27-run stand but when Cairns fell for 19, New Zealand were still four runs away. Stephen Boock and Troup held their own and the final runs came by leg byes as New Zealand won by one wicket.

The umpiring continued to dominate in the remainder of the Tests in Christchurch and Auckland. Goodall continued to anger the Windies. The Windies appealed for a catch against skipper Geoff Howarth but the umpire was unmoved. Incensed, West Indies threatened to not resume and they suggested boycotting the entire tour. After persuasion, they resumed but there ws one more unsavoury event when Colin Croft barged 'deliberately' into Goodall when coming into bowl. Clive Lloyd, the skipper, did nothing to stop it and he told the umpire to approach him at slip.

In the third Test at Eden Park, Auckland, West Indies continued to be on the receiving end of umpiring mistakes and four players made the decision to fly out and not participate. However, the match petered out to a draw as New Zealand won the series 1-0. This series loss would be the only loss for West Indies in the next 15 years as they scorched a path of domination. But, the Windies performance and body language in the entire tour, which included not taking catches or going for runs or fielding lackadaisically, was shoddy. It was not the way how champions performed. But, for New Zealand, it was the coming of age.