Ross Taylor Blasted His 21st Century And Assisted By Fifties From Henry Nicholls And Tom Latham, New Zealand Chased Down 348 To Win By Four Wickets And Take A 1-0 Lead In The Series As Shreyas Iyer's Maiden Ton Went In Vain.

Ross Taylor's magnificent 21st century and his blazing partnership of 138 with skipper Tom Latham put New Zealand on course to ending their jinx against India. However, as it happened in the Twenty20 Internationals, when New Zealand neared the target, they short-circuited and lost three wickets for 21 runs. Memories of their chokes in the T20I, which took place in Seddon Park two weeks ago and at Wellington were once again doing the rounds. But, Taylor ensured he did not throw it away. Mitchell Santner eased plenty of nerves in the New Zealand with a six and a four off Shardul Thakur as the scores were level in the 48th over. Taylor swung Mohammed Shami for a single and New Zealand, after all the heartbreak of the 0-5 T20I whitewash, finally got New Zealand over the line with a four-wicket win to take a 1-0 lead in the series. The exploits of Taylor helped New Zealand achieve their highest successful run-chase against India and also at Seddon Park.

Taylor, who had played his 100th Twenty20 International recently, won the Man of the Match award for his brilliance but credit also should be given to Tom Latham and Henry Nicholls for their aggressive knocks as they were not overwhelmed by Jasprit Bumrah, Mohammed Shami, Shardul Thakur, Kuldeep Yadav and Ravindra Jadeja. In a way, Hamish Bennett's last over, which went for just seven runs and ensured India did not go past 350, gave New Zealand the confidence and Taylor was quick to point that out.

"Restricting them under 350 gave us a chance. We were fortunate with the left-right hand combination and we were able to target the short leg-side boundary," Taylor said on winning the Man of the Match award. Knowing the dimensions of the ground, especially the short boundary on the leg side helped Taylor immensely. He has an average of 62 with four centuries at Seddon Park and he knew that the total of 347/4 posed by India, on the back of Shreyas Iyer's maiden ton and KL Rahul's tour-de-force of 88 could be chased down. India, on the other hand, were paid to pay for their shoddy work in the field and for their lack of control in their bowling which saw them concede 25 wides, including 13 by Bumrah alone.

India conceded way too many extras in the powerplay and it allowed New Zealand to build momentum in their chase. Nicholls was the prime aggressor and he capitalised on the Indian bowling after he had an LBW decision overturned when the ball was bouncing over the stumps. Nicholls slammed two boundaries off Shami and kept the scoreboard ticking. The partnership between Guptill and Nicholls crossed fifty but India suffered a moment of indecision when they did not appeal for a sweep of Nicholls that brushed the glove. Thakur broke the stand when Guptill upper-cut Kedar Jadhav to deep backward point for 32.

Nicholls, though, reached his fifty but Kuldeep Yadav got the wicket of Tom Blundell as he was stumped for nine. That brought Taylor to the crease. Taylor benefited from a dropped catch as he miscued the slog sweep off Jadeja but Kuldeep dropped it at deep backward square leg. The right-hander then hit Kuldeep for a boundary while Nicholls continued on his merry ways with two fours off the Chinaman. Nicholls neared his century with two fours off Shami while Taylor built momentum with a six off Bumrah but India found the opening when some brilliant fielding from Kohli and a swoop to score a direct hit caught Nicholls short of the crease for 78. Latham, the skipper, joined Taylor and both changed the course of the match totally. 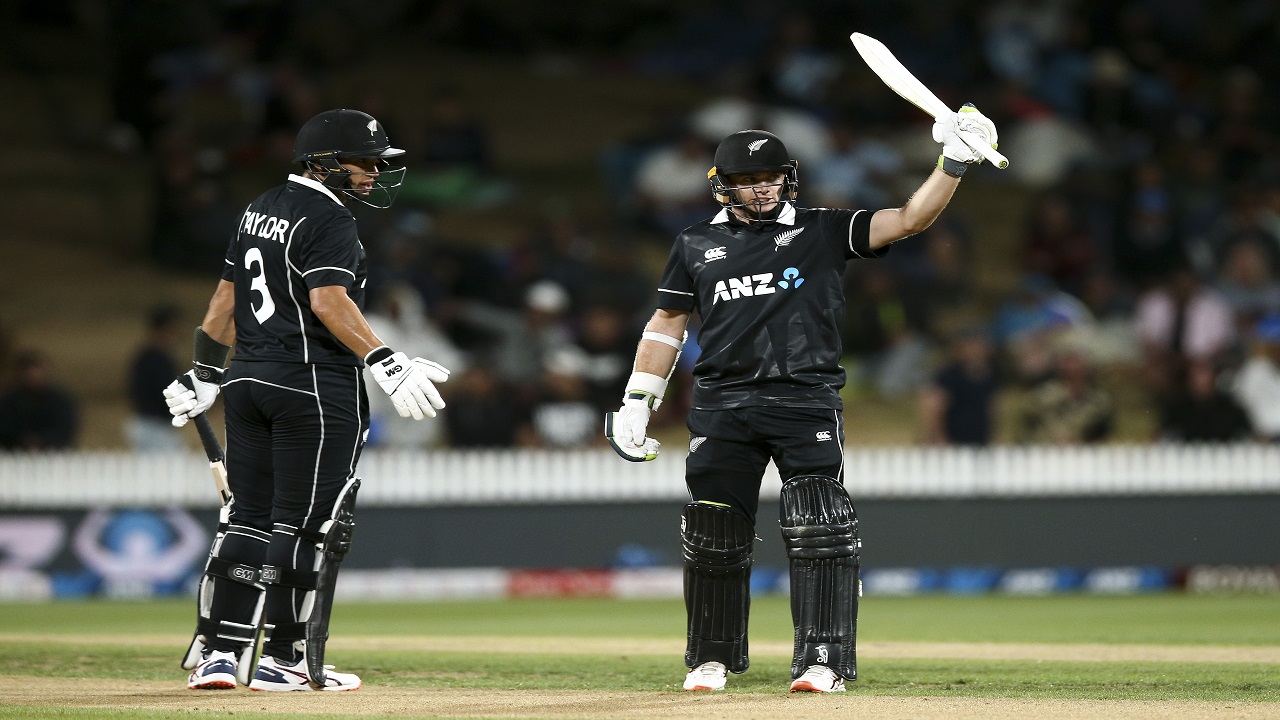 After a slow start, Latham opened up with two boundaries off Kuldeep and Taylor eased the pressure with another six off Thakur. The next eight overs yielded absolute carnage as 111 runs came and no Indian bowler was spared. Latham hit a six and four off Kuldeep and followed it up with two fours off Thakur. Taylor hit two boundaries off Shami and crunched a six and a four off Jadeja. Taylor found the boundary off Thakur and Latham notched up his 16th fifty by steering a pacy delivery from Bumrah to the deep backward point fence. Latham hit a six off Thakur and then Taylor hammered a six off a free-hit and two boundaries as 22 runs came in the over. The partnership ensured that despite the late wobbles, New Zealand could finally scrape through and end their death overs jinx which started at this very venue in the T20Is.

India though would be unlucky that they could not defend a total of 347 but their indiscipline is to blame. Kohli was quick to point out that Latham's knock was actually the game-changer. "I think Tom's innings took the game away from us. We were decent in the field, we dropped one chance. We need to improve though. I got to say that the opposition played better than us today," Kohli said after the match.

Prithvi Shaw was handed a debut along with Mayank Agarwal as New Zealand chose to bowl. Both batsmen started slowly but once they got their eye in, they scored freely. Following the quick dismissals of debutants Prithvi Shaw and Mayank Agarwal, Iyer got his eye in and proceeded to pound the New Zealand attack into submission. After a subdued start, Iyer got going with a one-handed four off Colin de Grandhomme while Kohli continued to find the boundaries. Iyer received his first life on 8 as he drove at a full and wide ball from James Neesham only for Ross Taylor to drop the catch at gully. 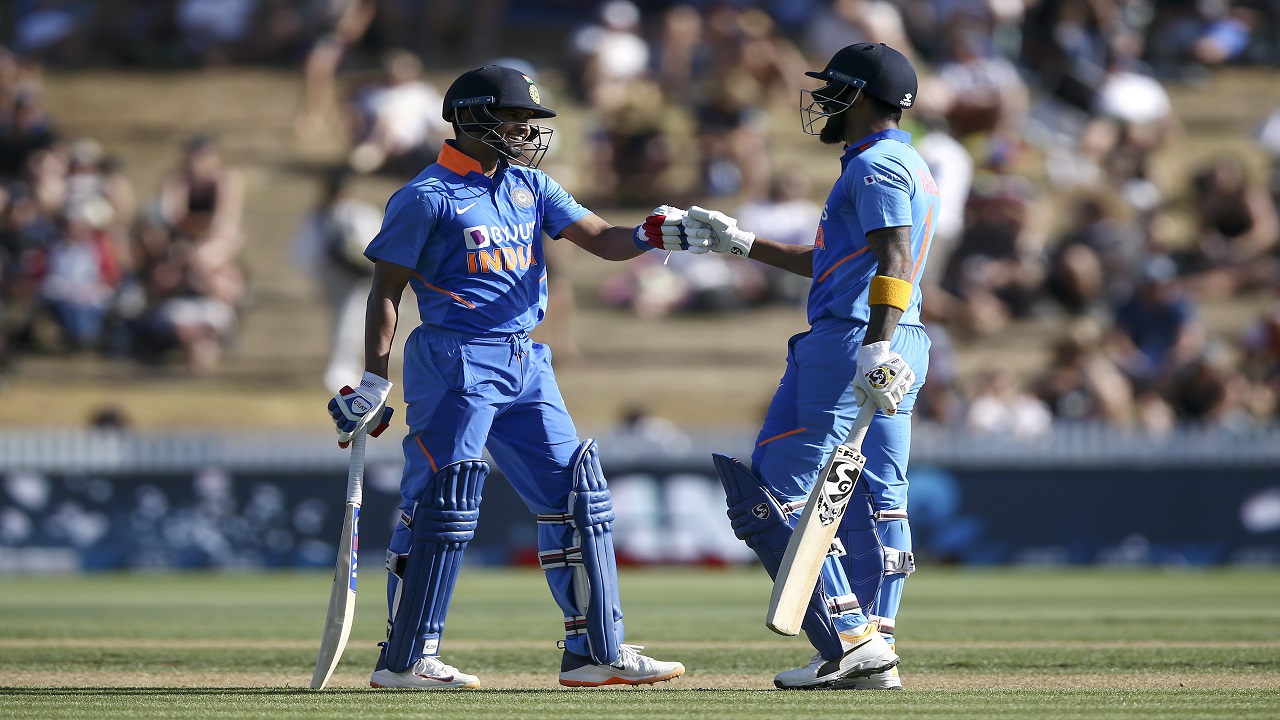 Iyer and Kohli smashed fours off Hamish Bennett and the Indian skipper notched up his 58th fifty. However, the Indian skipper fell to Ish Sodhi's googly for 51. Iyer found a great ally in KL Rahul as the Karnataka batsman launched two sixes off Sodhi. Iyer matched him for aggression as he launched Bennett over wide long on for a big six. New Zealand leaked runs and they did themselves no favours as Rahul launched two massive sixes off Southee. Iyer was facing some discomfort with his shoulder which required treatment but that did not stop him from smashing three boundaries in one over off Southee. On 84, Iyer got his second life as he launched Santner to long off but de Grandhomme dropped the catch.

Iyer fell for 103 but Rahul as well as Kedar Jadhav turned up the pressure. Jadhav, in particular, was harsh on Tim Southee as he hammered three fours and a six to further add credence that Southee's days as a death bowler in limited overs cricket is numbered. Rahul looked for a century when he reverse scooped James Neesham but Bennett's last over, which resulted in some wides but some wide yorkers as well, ensured India fell short of 350.

However, it was the stand between Latham and Taylor that gave New Zealand the belief and Latham credited Taylor's knock for it. "We saw how hard it was to defend with the left-right combination. It's nice to make winning contributions. The way Ross played was fantastic. We weren't quite where we wanted to be with the ball," Taylor said. New Zealand will be hoping that they can deliver a knock-out blow to India heading into the second match at Eden Park, Auckland.