Yashasvi Jaiswal's Magnificent Century, Combined With Divyansh Saxena's Unbeaten Fifty And Disciplined Performance From The Bowlers Helped India Thrash Pakistan By 10 Wickets And Qualify For The Final Of The 2020 ICC Under-19 Cricket World Cup

Yashasvi Jaiswal's ton made him the leading run-getter for India in the 2020 edition of the Under-19 World Cup. (Photo Credit: Getty Images)

In the build-up to the ICC Under-19 World Cup semi-final clash between India and Pakistan, there was massive hype as this would be THE game of the tournament. However, if one looked deeply at the recent Under-19 clashes between India and Pakistan in the World Cup, it has been slightly one-sided. In the 2018 World Cup in New Zealand, India thrashed Pakistan by 203 runs. In 2020 at Senwes Park in Potchefstroom on Tuesday, Yashasvi Jaiswal blasted his century and he was well-assisted by Divyansh Saxena's unbeaten 59* as India thrashed Pakistan by 10 wickets to comprehensively sail into the final of the 2020 ICC Under-19 World Cup where they will meet the winner of the second semi-final between New Zealand and Bangladesh.

Jaiswal's century and brilliant bowling performances from Sushant Mishra and Ravi Bishnoi helped India restrict Pakistan to an under-par score and their 10-wicket win helped India even their head-to-head record against Pakistan in ICC Under-19 World Cups to 5-5 while also improving their knock-out record to 3-2.

Nothing went right for Pakistan after they won the toss and chose. Mohammad Huraira was sent back Sushant Mishra with a pacy short ball while Fahad Munir struggled to lay bat on ball. Haider Ali, who has been Pakistan's most impressive batsman along with skipper Rohail Nazir, got going with two fours off Kartik Tyagi. Fahad's 16-ball struggle ended when legspinner Ravi Bishnoi sent him packing. However, Pakistan received a calming hand when skipper Nazir and Haider stitched a solid partnership. Both batsmen found the early going tough, with Kartik Tyagi and Atharva Ankolekar, along with Ravi Bishnoi not giving Pakistan any loose balls to capitalise on. Although both batsmen struck some boundaries, the pressure was being maintained by the Indian bowlers.

Both batsmen got their eye in and took the partnership past fifty but Jaiswal hurt Pakistan with the ball. Bowling a short ball, Haider cut the wide delivery straight to point and the 61-run stand was broken. Nazir held firm for Pakistan but he did not help to the team cause when Qasim Akram was run-out in a total breakdown of communication with both batsmen stranded at one end. Mohammad Haris looked threatening when he launched Bishnoi for a six after getting off the mark with a four. Having the best strike-rate among all Pakistan batsmen, Haris had the potential to take the game away from India. 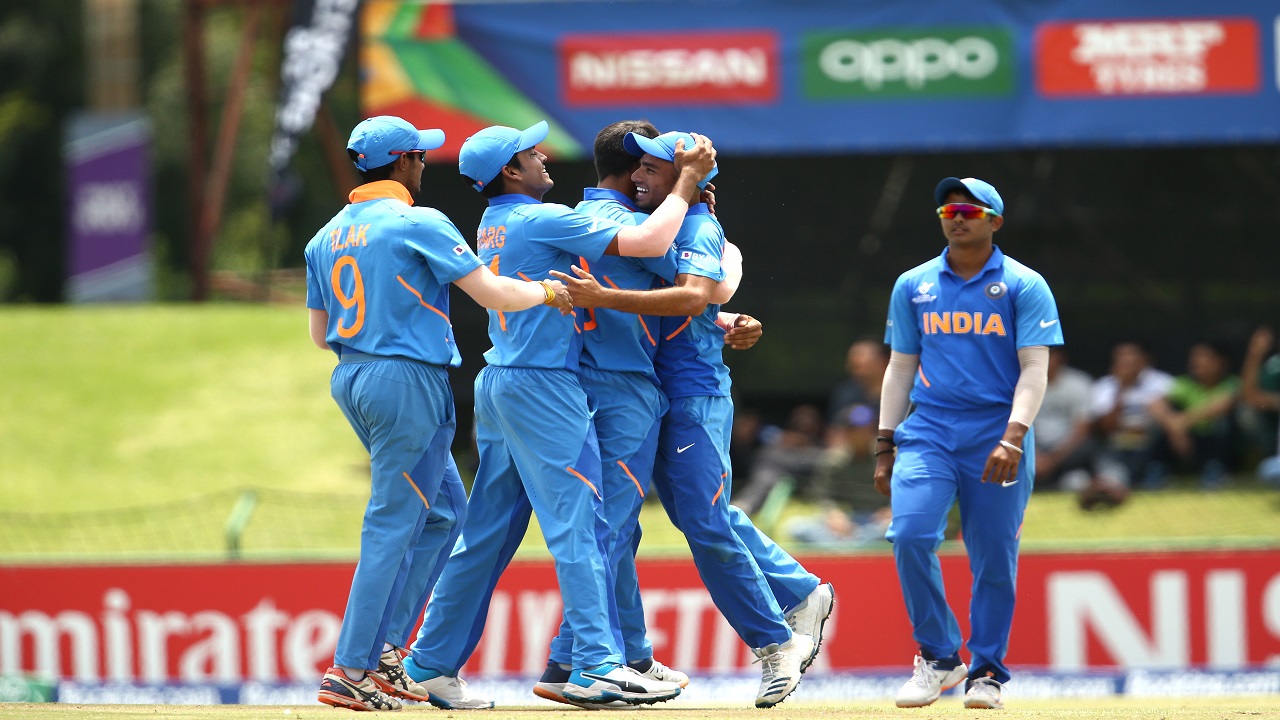 However, India's fielding came to the fore. Haris slog swept Ankolekar to deep square leg but Divyansh Saxena dived full length to his right and plucked a one-handed stunner. With Nazir running out of partners, he notched up his fifty and looked to farm the strike. Tyagi generated reverse swing and uprooted Irfan Khan's offstump while Bishnoi trapped Abbas Afridi LBW. Pakistan's hopes of reaching 200 took a serious blow when Nazir miscued a pacy short ball to be caught at square leg. It was credit to Priyam Garg's captaincy that he had man placed at square leg even when the death overs was approaching. The short ball tactic worked brilliantly for India and the Pakistan tail floundered with Tahir Hussain and Amir Ali falling to slogs off a short ball as they were bowled out for an underwhelming 173 all out in 43.1 overs.

Jaiswal was the more aggressive of the duo while Saxena looked to grind down the Pakistan bowling. Both batsmen rotated the strike and scored at will, knowing that there was no pressure of the scoreboard. At one point, Saxena had outscored Jaiswal but the Mumbai youngster went ahead of him with two boundaries off Qasim Akram the offspinner. Jaiswal neared his fifty with a slog sweep off Aamir Ali and notched up his fifty with two fours off the same bowler. With India under total control, Pakistan just had no answers.

As India neared the target, Jaiswal opened up with two fours off Abbas Afridi, one to wide long on and the other one was streaky as he fended a well-directed short ball past the keeper for a boundary. With Saxena reaching his fifty off legspinner Fahad Munir, it was Jaiswal who pressed the accelerator. He blasted two sixes and a four off Afridi to race past the 80s and he neared his century with a four off Akram.

When he hit the two sixes, Jaiswal became the leading run-getter in the 2020 edition of the Under-19 World Cup. Jaiswal almost threw his wicket away as he missed an attempted steer on 99 but it just evaded the edge. Fittingly, it was Jaiswal who ended the innings in style as he launched Aamir Ali for his fourth six to not only bring up his century but also give India their fourth consecutive win in the Under-19 World Cup encounter against Pakistan.

The 176-run opening stand was the highest for India in Under-19 World Cups against Pakistan. India are in their third consecutive final and they look favorites to win the title. Either of New Zealand or Bangladesh will have to play inspired and out-of-the-skin cricket if they have to topple Priyam Garg's India in the final on Sunday.