Manchester City has won 12 Premier League matches in a row and are on course to reach 100 points. (Image credit: Twitter)
HIGHLIGHTS

Pep Guardiola has suggested remaining in control of this season's relentless Premier League title race is his most satisfying achievement as a manager. The Manchester City boss says the English top division is the toughest domestic competition he has faced during a 10-season coaching career that has brought him 25 trophies. City has won 12 Premier League matches in a row, and are on course to finish just two short of matching last season's competition record of 100 points, yet they are being pushed all the way by Liverpool, who have set extraordinary standards of their own. Jurgen Klopp's side has lost just once in the league all season, against City in January, and recorded their eighth successive top-flight victory on Saturday, beating Newcastle 3-2 to return to the top of the table. City has a game in hand, at home to Leicester on Monday, but are likely to have to win both that and their final league match at Brighton next Sunday to retain their title.

"Yeah, it's the toughest league I've ever played as a manager, because of the quality of the rivals," said Guardiola, a former manager of both Barcelona and Bayern Munich. "No doubts. That's why being there is incredible. But, of course, only one will take the prize and the other one will be at home sad."

Guardiola is thrilled his City players have maintained their standards following last season's record-breaking points total, with the club three wins away from completing an unprecedented domestic treble of Premier League, FA Cup and League Cup.

"When you get 100 points, everyone thinks we won't do what we have to do (the following season), that we will do less because we won, but it has been completely the opposite," the Catalan manager said. "Arriving at this stage, two games left with 92 points, after 100 points last season, being there, that is the most satisfaction I've had as a manager. It's not easy, honestly. And they did it again. Now, we try to win against Leicester and then go to the final league game at Brighton with it in our hands, with a chance to be champions." The standard of this season's title race has rarely been equalled at the highest level of English football.

Since the rules were changed in 1981 to make a win worth three points, only once has a top-flight team finished with more than 95 points, and that was City last season. Yet both City and Liverpool are on course to pass that total this time around; Klopp's team have 94 points with one match left, at home to Wolves next Sunday.

Guardiola suggested Liverpool are one of the two best sides he has ever faced as a manager, with the other being the Barcelona team that thrashed City 4-0 in a 2016 Champions League meeting.

"The difference is Liverpool. We did the same job (as last season), he said. "In my career as a manager, I played against incredible sides. There are two that were 'wow'. One is Barcelona with Luis Enrique, with Neymar, Lionel Messi and Luis Suarez in front. The other is this Liverpool. I think they're the best two sides I've faced as a manager.

"That's why I am so happy being there, with it in our hands, fighting against them until the end, after being seven points behind at one stage this season, after collecting 100 points last season. When you are seven points behind, you can say: 'It's done'. We did the opposite of that. We were like (chipping away at) a stone. After that, we arrive here." 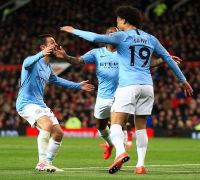 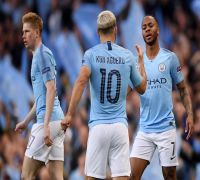 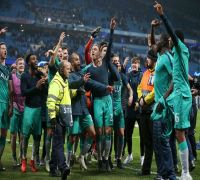