Australia welcomed back Steve Smith and David Warner to the national fold as they held their nerve to beat New Zealand by one wicket in the warm-up game in Brisbane.

Steve Smith and David Warner returned as Australia won by one wicket against New Zealand in their warm-up game in Brisbane. (Image credit: Twitter)
HIGHLIGHTS

Steve Smith and David Warner were back in Australia’s colours after more than one year. Warner contributed but Smith did not score much. In the end, Aaron Finch led from the front and despite a spirited fightback from New Zealand, the five-time world champions held their nerve to win the first warm-up game by one wicket at the Allan Border Field in Brisbane as they began their World Cup preparation. This is the first of three warm-up games which Australia will play against New Zealand before the start of the tournament when Australia takes on Afghanistan on June 1 at Bristol.

New Zealand chose to bat and they got off to a disastrous start when George Worker and Henry Nicholls fell for 0 in the first over bowled by Pat Cummins. It needed a partnership of 138 between Tom Blundell and Will Young to revive New Zealand as they looked to set a big total. However, Nathan Coulter-Nile further dented New Zealand when he removed Young (60) and Blundell (77) in quick succession. Blundell is the back-up keeper for Tom Latham in the ICC Cricket World Cup 2019 for New Zealand and he showed good form. 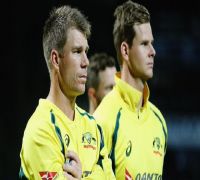 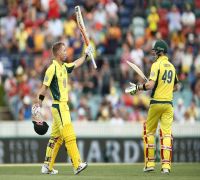 No tension as Steve Smith and David Warner back in Aussie colours: Langer 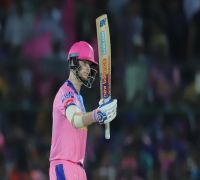 Getting better with each passing day: Steve Smith on elbow injury

However, with the dismissal of these two batsmen, Australia clawed back into the contest and kept picking wickets at regular intervals. New Zealand managed just 67 runs and lost six wickets as they folded for 215 in 46.1 overs, with Cummins, Jason Behrendorff and Coulter-Nile all taking three wickets apiece.

In response, Matt Henry removed Usman Khawaja, who had a good series against India and Pakistan for 4. Aaron Finch, who had a brilliant series against Pakistan, continued his great form but all eyes were on Warner, who had impressed for Sunrisers Hyderabad in IPL 2019 by becoming the leading run-getter. Warner showed that his good form is no fluke as he shared a 77-run stand with Finch but Warner fell for 39 off 43 balls.

Finch scored his fifty before being dismissed by James Neesham. Steve Smith hung in and scratched around for 22. Although Australia’s batsmen contributed consistently, New Zealand kept taking wickets at regular intervals. Australia were 164/7 and in danger of a loss but Nathan Coulter-Nile along with Pat Cummins shared a 33-run stand for the eighth wicket. Coulter-Nile’s valuable 34, to back up his 3/44 outlined his credentials but when he fell with the score on 205, New Zealand still had a chance.

However, Adam Zampa held his nerve and got Australia over the line by one wicket and they will be looking to sustain the good start in the second warm-up game which will also be played at the Allan Border Field.